The Importance and Benefits of Portable Testing

A Portable Appliance Tester (PAT) is an instrument that is dedicated solely to the safety testing of portable electrical equipment in accordance with recognized national and local standards.

A Portable Appliance Tester (PAT) is an instrument that is dedicated solely to the safety testing of portable electrical equipment in accordance with recognized national and local standards. Depending on locale, these standards may have been enacted into law. They may be requirements of specific industries or trade organizations, or just a good idea. In many cases, manufacturers of electrical consumer products who wish to export to foreign markets will be required, sometimes by national law, to assure the products have been safety tested. If testing is performed at time of manufacture, it will save money, aggravation and ill will that could result from having the products fail in the destination country.

Fortunately, given the enormity of the national grid, electrocutions are comparatively rare. Yet rare isn’t good enough. “None” is a better goal, though difficult to achieve. Independent standards agencies such as UL, CSA, NFPA and the NEC, however, have gone a long way in establishing the rules and practices of electrical safety, and manufacturers of testing equipment have taken advantage of these guidelines to develop efficient and reliable test methods and instruments.

Electrical safety encompasses a broad range, from the line cord on a toaster to a helicopter servicing a transmission line, but for the purpose of this article we will focus on consumer goods safety.

Each year, over 300 accidental electrocution deaths occur in the US. This number does not take into account the hundreds of more serious accidents that result in non-fatal injuries.

The majority of incidents are commercial and industrial work accidents; however, there are many household accidents that can, and do occur, that can strike anyone, especially young children. Sadly, because of their smaller body mass, children are at serious risk from shocks that might only sting an adult. Plugging in holiday lights or going to a soda machine shouldn’t pose such a risk, but unfortunately has. Only slightly less dramatic, but far more frequent, are fires started by faulty electrical equipment. Industrial, commercial, and domestic fires all have electrical faults as a leading cause. The safeguard is portable appliance testing.

A Portable Appliance Tester is not a measuring device, although measurement is an integral part of its operation. Rather, it is primarily a pass/fail device that uses electrical measurement as a means of making the pass or fail determination. The actual measurements are displayed and retained and can be used as vital information during repair and recalibration, as well as for necessary record-keeping and proof of testing. The concept of “portable” is broad. It includes virtually anything that has a line cord and can be moved without anything more than simple disconnection.

The earth bond (grounding conductor) is tested for continuity by circulating current and measuring resistance. One of several current options up to 25 amps are typically available for selection, depending on the gauge of the conductor. The test primarily checks the connection between the conductor and the dead metal frame of the item under test (IUT). Line cords typically take a physical beating from being yanked and dragged; an internal detachment of the conductor makes the operator the path to ground in event of a fault—this is not only dangerous, it can be deadly. 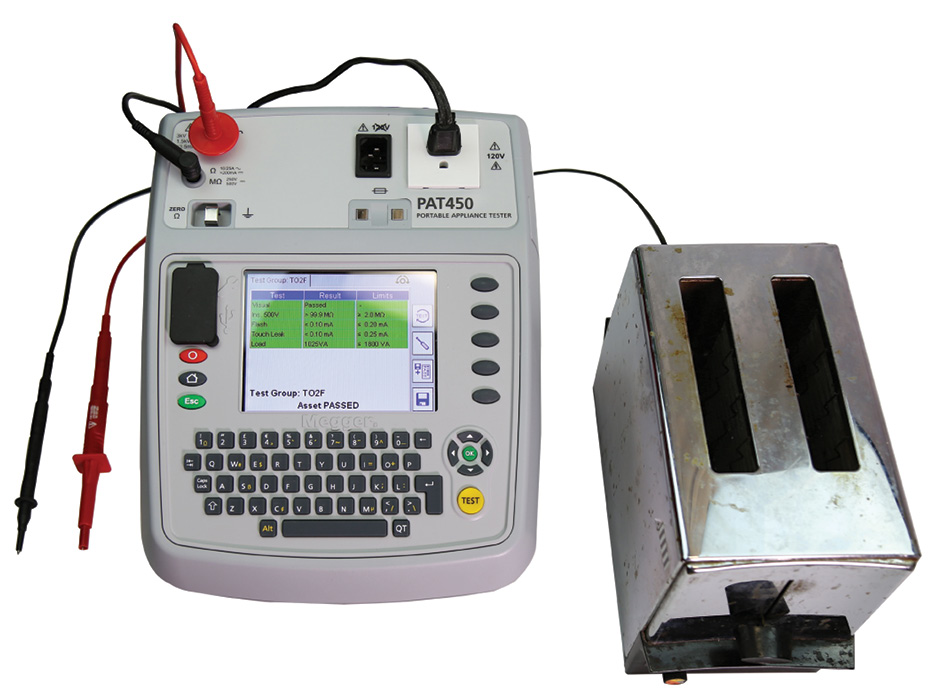 FIGURE 1: Testing the electrical safety of a toaster with a PAT.

An insulation test is performed at a selectable test voltage (e.g., 500 Vdc) to ensure against deteriorated or faulted insulation, which again can place the operator of the equipment in the ground path, or provoke gradual heat buildup to spontaneous combustion.

Leakage tests measure the amount of current the operator can be exposed to in normal, not faulted, operation. Should the operator suddenly become a good conductor—by stepping in water for example—such currents can be enough to cause shock and injury.

These types of currents are measured in three different ways: differential, touch and substitute. Differential leakage is the difference between current in the “hot” and neutral. It is measured with the IUT running. Any difference is current that could potentially go through the operator. Touch current is measured in the grounding conductor and through a probe to any metal surface, again with the IUT running. Substitute leakage is the current in the grounding conductor at a lower voltage, for safety concerns and protection of sensitive IUTs.

An operational test measures the current draw with the IUT running. Deteriorating equipment will begin to draw more current than name plate rating, providing an early warning. Excessive current draw is a hazard because it builds up heat and is a source of electrical fires.

A “flash” test, which is typically called a “hipot” in the US, is an insulation test that is run at higher voltage, again selectable, up to kilovolt levels. Its purpose is to break down marginal equipment so it does not fail in operation, and more importantly, in an operator’s hands.

It sounds like a lot of work, but the good news is that a PAT does it all. The IUT is simply plugged into a socket on the tester’s panel. Selection is made for three-prong grounded (Class I) or double insulated (Class II) items, or for extension cords and power bars. Some tests are implemented by a hand probe the operator applies. Of course, manual overrides are available if the operator wishes to be more proactive, but left to its own operation, a PAT will perform all the tests automatically and in a rigorous order of safety, posting the results as they are completed. In addition, a green or red pass or fail color code is applied. This is well received by inspectors, clients and other third parties because it eliminates “human error.” A supervisor can set the accepted values according to a prevailing standard, and then even an unskilled worker can run the tests. 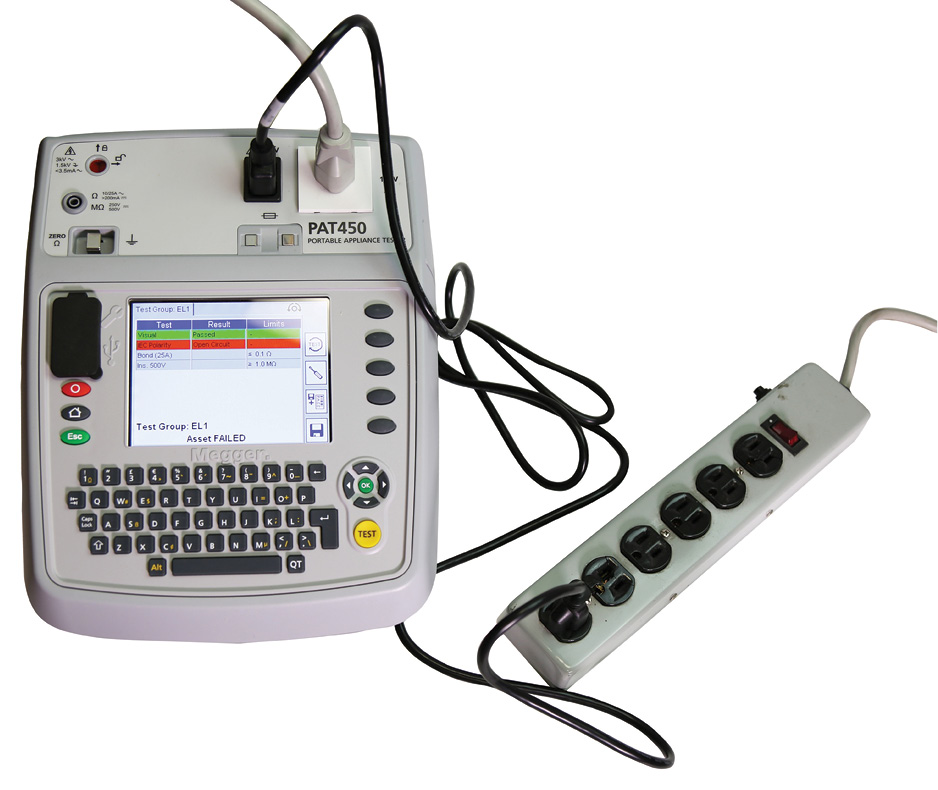 A safety hierarchy is always built into the automated procedure so that the tests are performed in proper order: ground bond first, insulation test second, leakage tests third, and operational test last. “Flash” tests are performed separately, because they are deliberate stress tests and only performed for commissioning and re-commissioning, not routine maintenance.

The PAT will execute the regime of tests with the results box listing each test in proper order and turning green sequentially as each is passed. If a test fails, the whole regime is stopped so the IUT can be repaired and retested. Overrides can be implemented, but it is not a good idea to continue testing an IUT that has indicated any failure.

Just as important, and useful, as the tests themselves is the data storage and manipulation. Record keeping is paramount so that the authorities, clients, insurance inspectors and customers can be assured the equipment has been safely maintained by objective and accepted standards. Data can be organized and stored in a variety of ways. A testing service can begin by listing each client, then entering each IUT grouped into types; copiers, hand drills, etc. A maintenance supervisor can organize by departments or rooms, and then the individual items. A large organization can organize first by individual sites. A manufacturer can organize by customers, then specific products, or any other more convenient way of managing the data.

Finally, individual pieces of equipment can be bar coded and labeled so that subsequent testing can be implemented with ease. Just call up the individual IUT, observe previous result for comparison to present condition, and download new data for the next go-round.

While routinely testing all the portable electrical equipment in a facility may seem like a prohibitive task, this challenge hasn’t been lost on the designers. On one hand, a whole regime can be automated to a few button pushes, with the tester proceeding on its own in a prescribed order. But tests can also be done individually and retests can be performed at the operator’s discretion. In addition, a highly flexible menu allows technicians and supervisors to tailor each test regime precisely as a dedicated test group—which tests to perform and what values to accept. Various levels of expertise are available, so a supervisor can reserve certain critical functions only to himself or herself. And everything—an almost limitless amount of data—can be stored and recalled in a moment, facilitated by convenient drop-down boxes. 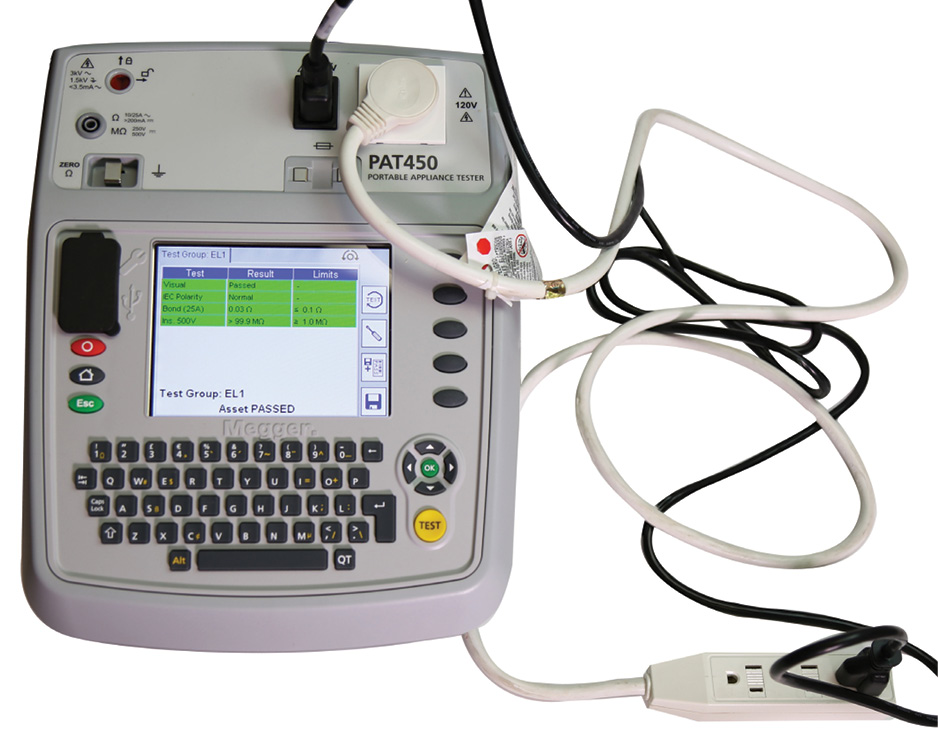 It’s a Good Idea
to be Ahead of the Curve

Portable appliance testing is a good idea on many levels. It can extend the life of equipment by keeping a regularly-updated maintenance regime. It assures tool rental agencies and tool cribs that the equipment they’re giving out is safe to operate. It is a vital aid in OSHA compliance and insurance protection. The automated records can be a critical ally in litigation. While not mandated in the US, it is in many advanced countries. The testers and technologies are available everywhere. Be ahead of the curve. UP

About the author: Jeffrey Jowett is Sr. Applications Engineer for Megger in Norristown, PA. He has 39 years continuous employment, beginning with James G. Biddle Co., then Biddle Instruments, then AVO Int’l, and now Megger. Jowett has written numerous trade journal articles; conducted training of distributors’ sales staffs and customers; and given seminars, training sessions and talks to various electrical societies [including Nat’l Electrical Testing Ass’n (NETA) and Nat’l Joint Apprenticeship Training Committee (NJATC)], and to those open to the general industry public. He is a member of IEEE and committee for the revision of Standard 81, Recommended Guide for Measuring Ground Resistance and Potential Gradients in the Earth.