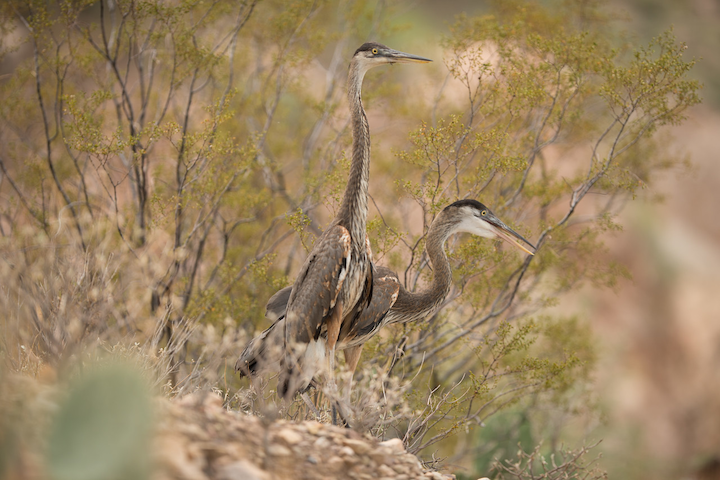 Last spring, Cliburn found a nest with three eggs on top of a stilling well he uses every day to measure the lake levels.

“The birds built their nest right in the middle of a busy area for us. At least once a day, one or two operators would have to come to that area to take lake measurements,” said Cliburn, operations specialist at Roosevelt Dam.

Great blue herons are native to Arizona and often found at SRP reservoirs including Roosevelt Lake. The Migratory Bird Treaty Act protects the birds and their nests. They are colonial nesters and tend to build their nests close to other herons.

With the nest in the way, Cliburn called on SRP avian expert Lesly Swanson for advice on moving the nest. Swanson contacted the US Fish and Wildlife Service to determine how SRP should address the nest.

“In our regular day-to-day operations, we often encounter birds and in some instances we may have to move a nest to ensure the well-being of the birds and the delivery of safe, reliable water and power. SRP works closely with Liberty Wildlife to address wildlife needs at SRP facilities,” said Lesly Swanson, senior environmental scientist in SRP’s biological and cultural resources group.

Swanson’s group ensures that SRP is in compliance with federal and state environmental and cultural resources policies and regulations.

The surviving two herons, who Cliburn named Monique and Unique, were released Tuesday morning at the base of the dam and now have a good chance of surviving, said Laura Hackett, a Liberty Wildlife volunteer.

“This is a really great outcome,” Hackett said. “They seem really comfortable like they are going to be able to adapt really well. I expect great things.”