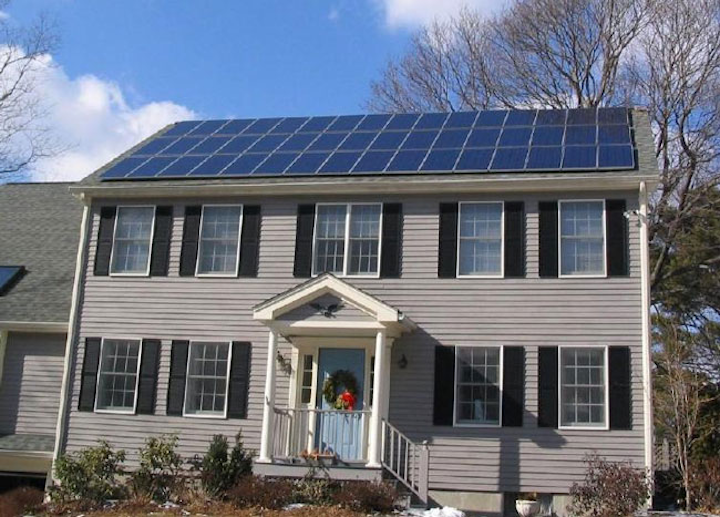 BOSTON (AP) — Gov. Charlie Baker has filed legislation he says will encourage the development of solar energy projects in Massachusetts.

Baker said the bill he filed on Friday will raise existing caps on the state's net metering program that allows homeowners, businesses and local governments to sell excess solar power they generate back to the electrical grid in exchange for credit on their bills.

Activists said 171 communities across the state that have reached the cap and some larger solar projects have stalled without access to the guaranteed revenue.

The Massachusetts Senate recently passed legislation to lift the net-metering caps and direct the Department of Energy Resources to create a new solar incentive program when the state's 1,600 MW goal of installed solar capacity by 2020 is reached. That's enough to power about 240,000 homes per year.

Baker said his plan would help the state meet that goal well ahead of schedule.

The cap is calculated as a percentage of each utility's highest historical peak load — the most electricity consumed by their customers at any one time. Private facilities are capped at 4 percent, public facilities at 5 percent in the amount of solar energy available for net metering credits.

Baker would raise those private and public net metering caps two percent each to 6 and 7 percent.

Baker said the increase will provide immediate support for projects being developed in service areas where the caps have already been reached. The bill also gives the Department of Public Utilities the authority to raise the caps further, as needed.

He said the change would provide an additional revenue stream for solar projects.

"Massachusetts continues to boast a nation-leading solar industry, and this legislation will build upon that continued success while ensuring that our state's solar market remains viable and sustainable for years to come," Baker said in written statement.

Baker, through a spokesman, had previously distanced himself from calls to lift caps on the net metering program.

Utilities have also said they were concerned about lifting the existing caps, arguing that customers without solar panels are helping foot the bill for those who use net metering, saying that they're not helping cover the cost of the wires and poles they are using to send power back to the grid.

Mary-Leah Assad, a spokeswoman for National Grid, said Baker's proposal will end up costing ratepayers an additional $160 million on top of the $1.5 billion in solar subsidies National Grid customers will already shoulder by 2020. She also said National Grid could reach the new caps as early as October.

Renewable energy activists said they were encouraged by Baker's bill.

Ben Hellerstein of Environment Massachusetts also praised the move, but said he was worried it could ultimately slow the growth of solar. He said any compensation system for solar power should take into account all of the benefits that solar energy provides, including benefits to the environment, the economy, and the electric grid.

Baker said his bill would create a program to continue to encourage the development of solar power after the state reaches its goal of 1,600 MW at a reasonable cost to ratepayers while promoting equitable access to solar energy.

He said the bill also makes sure the costs of the net metering program are shared among all ratepayers.

Massachusetts has already installed about 881 MW of solar electricity. The administration had previously said that even without changes to the net metering cap, the state is on track to hit the 1,600 MW goal by 2018.