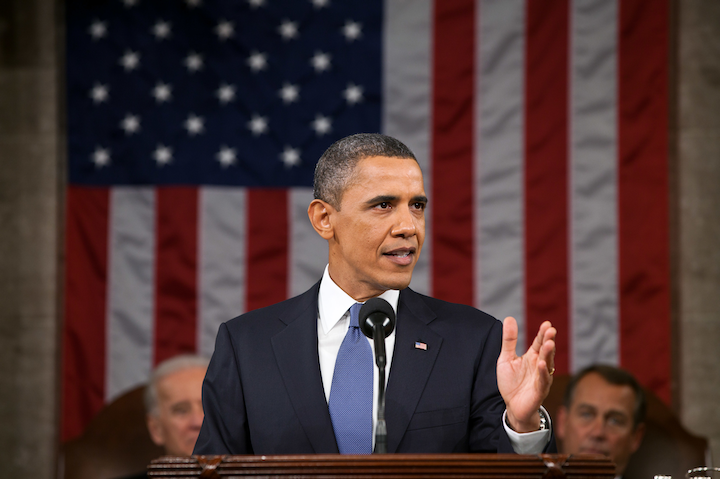 Tuesday night, President Barack Obama’s delivered the sixth State of the Union of his presidency, and the first with Republicans controlling both houses of Congress.

Obama made several passing references to issues affecting the energy sector — primarily the growth of jobs in the renewable energy industry, and touching upon issues such as cybersecurity and infrastructure investment.

He kicked off his remarks by saying, “the shadow of crisis has passed, and the State of the Union is strong.”

In support of this statement, Obama said the U.S. could now boast a growing economy, shrinking deficits, bustling industry and booming energy production. There are Americans working in jobs that didn’t exist in the past decade, he said, at companies like Tesla Motors, Google and eBay.

Challenges, however, do remain, he said. The president challenged Congress to invest in American infrastructure.

When it comes to issues such as infrastructure and research and development, the president said there is bipartisan support.

“Over the past six years, we've done more than ever before to combat climate change, from the way we produce energy, to the way we use it,” he said. “The United States will double the pace at which we cut carbon pollution, and China committed, for the first time, to limiting their emissions. And because the world's two largest economies came together, other nations are now stepping up, and offering hope that, this year, the world will finally reach an agreement to protect the one planet we've got.”

Scientists at some of the nation’s most prestigious research centers, universities and labs say that it is time to act on climate change, he said.

"I've heard some folks try to dodge the evidence by saying they're not scientists. ... Well, I'm not a scientist, either," he said, before adding "the best scientists in the world are telling us that our activities are changing the climate."

The president called on Congress to address cybersecurity issues with new legislation.

“We are making sure our government integrates intelligence to combat cyber threats, just as we have done to combat terrorism. And tonight, I urge this Congress to finally pass the legislation we need to better meet the evolving threat of cyberattacks, combat identity theft, and protect our children's information. If we don't act, we'll leave our nation and our economy vulnerable. If we do, we can continue to protect the technologies that have unleashed untold opportunities for people around the globe,” he said.

In the Republican response to the State of the Union, Iowa Sen. Joni Ernst said her party was working to support the construction of the Keystone XL oil pipeline, which she said would create jobs and address the country’s energy needs.