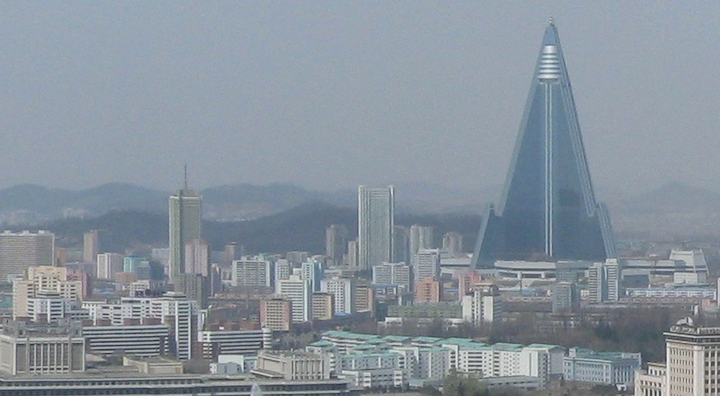 PYONGYANG, North Korea (AP) — North Korea is racing to boost its electric power supply by up to 50 percent with the completion of several power plants by the end of the year and is pushing alternative resources like solar power — already used extensively in the countryside — to ease its chronic shortages, a government expert told The Associated Press in Pyongyang.

In an unusually high-profile campaign, North Korea has mobilized legions of shock brigades to complete two large hydropower projects by Oct. 10. As is common with major North Korean construction efforts, the deadline is a date of national significance: the 70th anniversary of its ruling party.

Officials hope a noticeable increase will provide tangible proof that the party is working to improve the impoverished and heavily sanctioned nation's standard of living. Kim Kyong Il, a senior researcher at Pyongyang's Academy of Social Sciences, said the goal is a 20 to 50 percent increase in power compared with the 2014 level.

How effective its latest "speed campaign" will be is an open question.

Even achieving its target would leave North Korea with a small fraction of what it needs to fuel a vibrant economy or even meet some basic needs of its population. Experts stress the country needs more than just new power stations — it must improve its transmission infrastructure to get the electricity where it is needed, secure spare parts and conduct sustained maintenance to keep the plants themselves going.

Supplying its industries and 24 million citizens with even a bare minimum of electricity has long been one of North Korea's biggest problems, particularly after the fall of the Soviet Union in the early 1990s. Since then, the international community has offered to help the North expand its power grid, if it agrees to dismantle its nuclear weapons program, but to no avail.

North Korea's total, nationwide electricity output is believed to be about 15 terawatt hours per year, give or take 10 or 20 percent. That would only be about enough to power Seoul, the South Korean capital of 10 million, for less than four months.

It's been estimated — though never confirmed by Pyongyang — that about one-fifth of North Korea's electricity is diverted to its 1 million-person military. Moreover, a disproportionate amount of the nation's power is used to light up Pyongyang, where less than one-tenth of the population resides.

Kim, the government expert, said the North is shifting its focus in line with leader Kim Jong Un's promise to improve the lives of the North Korean people and invigorate its economy.

He said North Korea is exploring wind and tidal power sources and added that solar already provides as much as half of the electricity in some rural areas. Small solar panels, seen by outside experts as a grassroots coping mechanism where state-provided energy is woefully lacking, are a common sight on apartment balconies and some countryside farms.

"Our country regards electricity as the engine of the national economy, so the state is increasing investment in this field," he said. He added that a major portion of the 2015 national budget that didn't go to defense has been earmarked for investment in the power sector, though he refused to give precise figures.

Kim said two major projects — Mount Paektu Songun Youth Power Station units No. 1 and No. 2 and Huichon Power Station units 5, 8, 9 and 10 along the Chongchon River — are expected to be completed in time for the anniversary. The hydropower station on Mount Paektu, near the Chinese border, was started under Kim Jong Un's father, the late Kim Jong Il, but had been plagued by delays.

State media in the North, officially known as the Democratic People's Republic of Korea, have portrayed the race to complete the megaprojects as a heroic demonstration of national will.

"The young people of the DPRK have gone through thick and thin in hearty response to the call of the party to flatten even mountains, empty seas and conquer space," the ruling party's newspaper said in a recent editorial. "Now is the time for them to powerfully demonstrate their courage, unity and fighting capability before the world."

But Kim acknowledged it's hard to predict how much power the units will actually produce.

"If the power stations now under construction are completed, tens of thousands of kilowatts will be generated," he said. "But this is only the capacity of the power stations. Actual output differs, so we will have to wait and see how much it comes out to."

Kim said North Korea relies on hydropower for 60 percent of its power grid, and on coal-fired thermal power for most of the rest. Both are vulnerable: hydropower to droughts and freezing, coal to supply and quality problems.

Kim said a "once in a century" drought last year caused a 10 percent drop in the output of hydropower stations, which he said was largely offset by increased coal power output. Not surprisingly, rural areas, which are low on the priority list for energy allocations, except at rice harvest time, were hardest hit by shortages.

Still, he added, assessing the North's capacities, and even its needs, is complicated because Pyongyang makes so little information public. North Koreans also long ago adjusted their lifestyles to the realities of scarcity — for example, by not buying appliances or equipment that require electricity.

"The country has lived under a shortfall for so many years that it's difficult to know what demand would be if there were enough power," he said.