The project is expected to take 36 months to construct 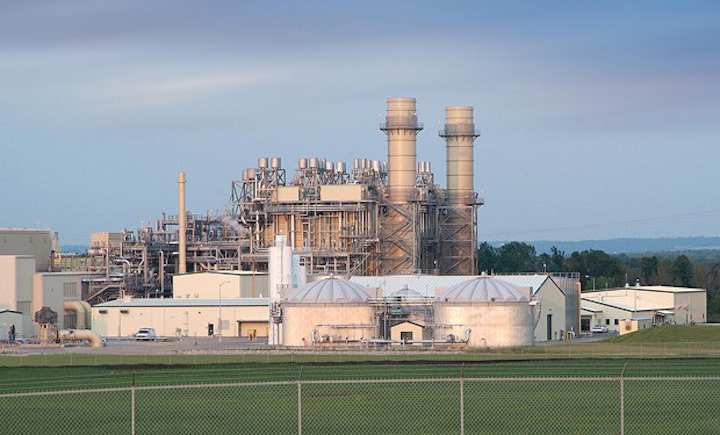 The Wisconsin Department of Natural Resources is taking public comment until July 20 on a draft air permit change that will allow Wisconsin Public Service Corp. to upgrade the two existing units at its Fox Energy Center.

"The project is comprised of an engineered conversion, modification, and upgrade (CM&U) package that will substantially convert the 'hot section' of each combustion turbine from its current configuration (GE model number 7FB.01) to a more recent technology offering (7FB.04) having a design common to GE’s 7FA.04 and 7FA.05 models," said a DNR permit document.

"From an operating perspective, the project will reduce turbine firing temperature, pressure ratio, heat rate, and certain 'off-engine' emissions (when operating above the minimum emissions compliance load), while enhancing output under certain conditions. The project will result in an increase in the maximum design heat input capacity of about 1.4 percent when operating on natural gas (at ambient conditions of -32 ºF and 59 percent relative humidity). As a result, hourly emissions of uncontrolled air pollutants that are directly proportional to natural gas flow will potentially increase.

"WPSC has stated that data from the CTG original equipment manufacturer (OEM) indicates that upon completion of the proposed technology conversion, minimum steady state operation is expected to be possible at levels below the 50 percent load specified in the current permit when combusting natural gas. According to the OEM, the minimum steady state load, depending upon ambient conditions, fuel type and certain CTG control system parameters, is expected to range between 35 percent and 50 percent of base load. WPSC has proposed changing the definitions of startup and shutdown to address the fact that the CTG will be able to achieve steady state operation load levels below 50 percent when combusting natural gas."

Wisconsin Public Service Corp. said in its December 2014 application that the project is expected to take 36 months to construct, with a construction start in March 2016.

Wisconsin Public Service Corp. on June 3 officially withdrew an application with the Public Service Commission of Wisconsin for approval of its 400 MW Fox Energy Center Unit 3 gas-fired project. The commission, in its May 21 approval of a merger between the parent of WPSC and the parent of Wisconsin Electric Power, had said that Wisconsin Electric Power has excess generating capacity and that WPSC may no longer need the Fox Unit 3 project.

The June 3 notice said: "Wisconsin Public Service Corporation ('WPSC') hereby withdraws its application in the above-referenced docket for a Certificate of Public Convenience and Necessity ('CPCN') for a 400 MW combined-cycle natural gas plant known as Fox Unit 3 ('Application'). WPSC understands that if the proposed acquisition of Integrys Energy Group, Inc. by Wisconsin Energy Corporation, approved in the Final Decision, fails to close, WPSC may re-file the Application and that this re-filing will re-start Commission staff’s review of the Application.

"WPSC further understands that the re-starting of this review will involve WPSC’s response to the staff’s application incompleteness letter dated May 19, 2015. Provided that WPSC’s response addresses the two items in staff’s letter, with the requirement for a joint resource plan for the combined loads of WPSC and Wisconsin Electric Power Co. rendered moot by the failure of the acquisition, the Application will be deemed complete and the 180-day review period under [Wisconsin statute] will commence. WPSC also hereby notifies the Commission that the company has ceased all pre-certification spending on the Fox Unit 3 project except for the minimum costs necessary to preserve the project as a viable and cost-effective alternative pending completion of the joint integrated resource plan required by the Final Decision.

"For example, WPSC may incur costs under the recently executed Generator Interconnection Agreement for transmission planning and design work. These costs are necessary to keep the project in its very advantageous MISO 'queue' position. WPSC minimized the cost of maintaining its MISO queue position by putting up a parental guarantee for transmission planning and design costs instead of a large upfront cash payment."

The Public Service Commission of Wisconsin on May 21 approved the acquisition of Integrys Energy Group by Wisconsin Energy Corp., with various conditions put on the deal, including this one about Fox 3.