The U.S. and California list them as a threatened species 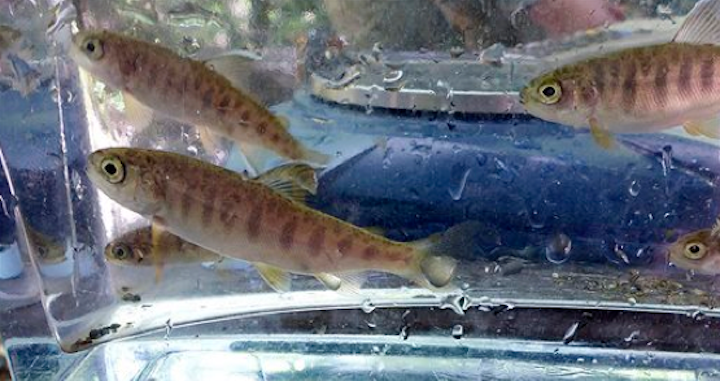 SAN FRANCISCO (AP) — More than one-tenth of the largest wild population of threatened salmon in the Central Valley died after repair work near a power plant led Pacific Gas & Electric Co. to cut off a cooling flow of water into a creek, wildlife and utility officials said Friday.

PG&E, the state's largest utility, restored the water flow on Wednesday to a remote stretch of Butte Creek, home to the largest of three surviving wild populations of Central Valley spring-run Chinook salmon.

The death of 277 of the fewer than 2,000 adult Chinook in the creek underscored the vulnerability of one of California's most iconic species in a drought year marked by record low amounts of cooling snow melt.

Salmon populations from Monterey on the central coast to the Oregon border are showing problems related to low, warm water conditions created by the driest four years in state history.

"As the drought wears on, it's just going to get worse," Andrew Hughan, a spokesman for the California Department of Fish and Wildlife, said from the banks of Butte Creek, north of Sacramento.

PG&E spokesman Paul Moreno said utility crews rushed an emergency repair project on a canal to restore water flows into the creek as quickly as possible.

"I can tell you that ... crews worked every day to get that back in place," Moreno said.

The problem began when the utility learned of leaks in a canal carrying water from a utility reservoir to PG&E hydroelectric plants. The utility shut down the canal May 29 to line a 500-foot stretch of the waterway, Moreno said.

Without the cooling flow, a hot spell last weekend brought water temperatures in the creek up to the 70s and 80s, fostering a rapid outbreak of deadly pathogens that afflict the gills of the salmon, cutting off oxygen, said Howard Brown, Sacramento River branch chief of the National Marine Fisheries Service.

Clint Garman, a biologist with the state wildlife department, said existing conditions from the drought would have killed some of the salmon in the creek outright, but the temporary water cutoff by PG&E increased the number of deaths.

"There is a lot of very careful management" of water by the utility and regulators at Butte Creek, "and in a normal year it works very well," Brown said. "It's just the worst year for this kind of thing, and the timing couldn't have been worse."

The creek is the last, best stronghold of spring-run Chinook salmon, Garman said. Only two other creeks still hold wild populations of the Central Valley spring-run Chinook. At last count, fewer than 400 adults were alive in both of those creeks.

The Chinook numbered tens of thousands as recently as the 1990s. The U.S. and California list them as a threatened species.