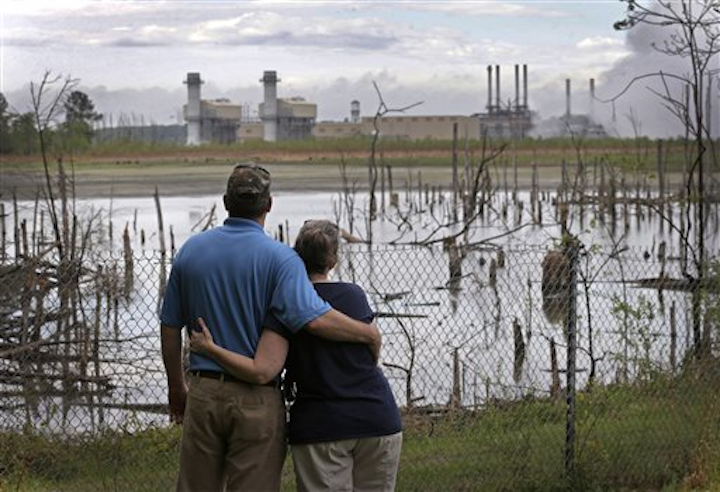 RICHMOND, Va. (AP) — Virginia agreed Thursday to a $2.5 million settlement with Duke Energy for a February 2014 spill of coal ash in North Carolina that floated down the Dan River, depositing tons of the toxic stew into the city of Danville's waterfront and beyond.

Environmental and water protection groups seeking $50 million called the settlement meager, while state environmental officials who brokered the deal said they were limited by law in terms of what they could recover.

The State Water Control Board sided unanimously with the Virginia Department of Environmental Quality and its proposed penalty for violations of the state's water control laws.

Critics said a larger penalty would have served as a deterrent to other power companies that are storing mountains of coal ash, the remnants from coal-fired power plants.

"Power companies that are managing millions of tons of coal ash in our watershed have got a serious responsibility to manage them safely and right now they're not doing it," said Cale Jaffe, director of the Charlottesville office of the Southern Environmental Law Society. "That was an opportunity that, unfortunately, was left on the table."

Duke Energy said it welcomed the board's approval and said it was appropriate, given the federal penalties it already has been assessed.

"I think the board did an excellent job of considering everything involved," spokesman Davis E. Montgomery said.

In February, Duke and federal prosecutors said the energy giant had agreed to plead guilty to violations of the Clean Water Act related to the spill and other violations and pay $102 million in fines, restitution and community service. The company said the settlement costs would be borne by its shareholders, not passed on to its electricity customers.

The 39,000-ton coal ash spill originated in Eden, North Carolina, but affected areas in Virginia, too, leaving more than 2,500 tons of the gray sludge backed up behind a dam in Danville. The waste product contains toxic metals.

The state's consent decree with Duke does not prevent other localities from pursuing their own compensation from the utility, as Danville has been doing.

Danville officials said the spill has soured economic development and made some residents wary of the river. The Dan River runs through the old mill city, which is amid $100 million rebirth of its waterfront.

At Thursday's Water Control Board, members questioned DEQ officials on the impact of the spill in Virginia and how they arrived at the settlement.

"How big was the fish kill in this event?" asked Thomas Van Auken.

None, a DEQ official told him.

"So this looked pretty bad but maybe it wasn't as bad as it looked," Van Auken added.

Scientists have said it could take years to fully assess the environmental impact.

The settlement, Jaffe added, was a fraction of the compensation paid to Duke's CEO and a sliver of Duke's $120 billion in assets.

"The company can afford to clean up the Dan River," he said.

The SELC says more than 90 percent of the coal ash has not been recovered from the river.

At one point, Van Auken asked Jaffe how he would clean the Dan River of coal ash.

Jaffe demurred, responding that the question was best put to scientists, not lawyers.

The DEQ's director, David K. Paylor, backed his enforcement chief, Jefferson D. Reynolds, and the settlement he delivered to the board.

The DEQ has said the settlement would include $2.25 million in environmental projects that Duke would perform in communities affected by the spill. The remaining $250,000 would be placed in a fund for the department to respond to environmental emergencies.