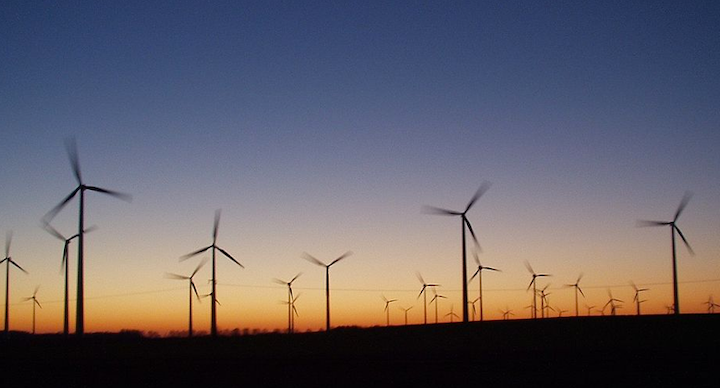 STOCKHOLM (AP) — The growth of renewable energy outpaced that of fossil fuels in the electricity sector last year, with a record 135 GW of capacity added from wind, solar, hydropower and other natural sources, a new study shows.

That's more than the generating capacity of all nuclear reactors in the United States and slightly less than Germany's installed capacity from all power sources.

The annual report released early Thursday in Europe by Paris-based REN21, a nonprofit group that promotes renewable energy, underscored how China, the world's top consumer of coal, has become a global leader in clean energy, too.

It also highlighted that while renewables now account for 28 percent of the world's electricity-generating capacity, they still account for only a tiny share of how we heat and cool buildings and fuel our means of transportation.

"The share of renewables in the power sector will continue to grow. We see that already, especially in emerging economies," said Christine Lins, executive secretary of REN21. "But we need attention to the heating-cooling sector and transport."

Renewable energy's share in all forms of energy consumption — currently about 10 percent — will have to increase dramatically to fulfill the vision that President Barack Obama and other leaders of the Group of Seven wealthy economies endorsed last week. To fight climate change, they called for deep cuts in heat-trapping carbon emissions and all but eliminating them by the end of the century.

Meanwhile, global energy production must surge to meet the demands of developing economies and a growing world population. The fossil fuel industry and many energy experts say that can't happen without fossil fuels, even in the electricity sector, where coal remains the top fuel.

"Renewables will grow but that doesn't mean coal is going away," said Benjamin Sporton, head of the World Coal Association.

Sporton said India is commissioning 20 GW of coal-fired power generation every year. "And they have a further 118 GW under construction or approved," he added.

However, earlier this week the IEA said that, among other measures, investments in renewables need to increase from $270 billion last year to $400 billion in 2030 to support a transition to a low-carbon economy.

The REN21 report said renewables accounted for almost 60 percent of the global power capacity added in 2014. Wind power made the biggest jump among the renewables in 2014, with 51 GW of new capacity, almost half of it in China.

"This shows that countries are turning towards clean energy to meet their energy needs, rather than fossil fuels that are driving climate change," said Jake Schmidt of the Natural Resource Defense Council, a U.S. environmental advocacy group.

Solar power also expanded, but from a low level; it accounts for only 1 percent of global electricity production.

Geothermal power added just 700 MW of capacity, half of it in Kenya. Other renewable sources, such as ocean energy from tidal forces, are not yet having any significant impact.

In heating and cooling of buildings and industry, which accounts for about half of global energy consumption, there was little change from the year before, with renewables representing about 8 percent, mostly biomass.

In the transport sector, dominated by oil-based fuels, the impact of renewables remained small despite growth in biofuels. In road transport their share was only 3.5 percent in 2014, up from 2 percent in 2007, Lins said. As fuel for jets, renewables are still in the experimental stage.

The report said at least 164 countries have set targets for renewable energy and about 145 had policies in place to support it. The authors called for governments to increase support for renewable energy, particularly in the heating and cooling sector.