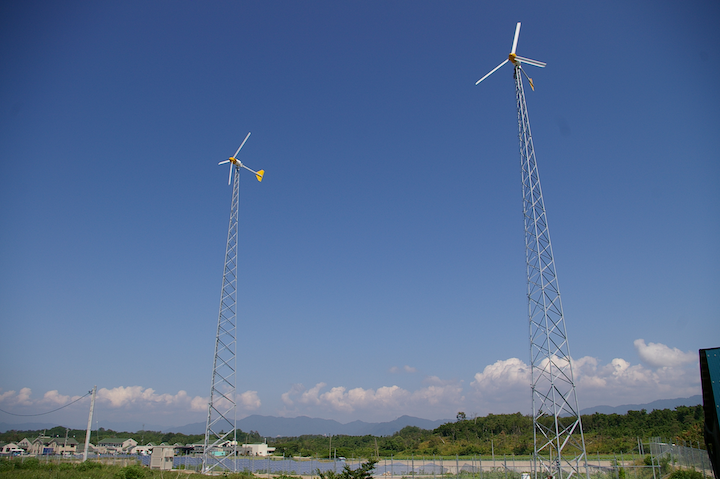 After a three-year effort to gain first-ever separate product certifications for its wind turbine, electronics and towers, Bergey Windpower has seen the first installations of its best-selling 10-kW wind turbines in Japan.

Two Bergey Excel 10 turbines were installed on 100-foot towers near Nagata in western Japan in May and connected to the grid in early June.

With their full certification — the first of its kind in Japan for a turbine and tower — by ClassNK (Japan’s certification body for small wind turbines), the Bergey 10-kW turbines qualify for a Japanese federal incentive program (J-FIT) that pays the turbine owner 55 yen (approximately 44 cents) per kilowatt-hour produced.

The J-FIT program has helped spur a boom in solar installations in Japan. The new J-FIT certification program for small wind turbines is expected to have the same impact on the small wind market during the next several years.

“We are proud that our 10-kW turbines — which are already the best-selling turbines in the world in the 5-kW to 20-kW range — are now the first in Japan with a certified tower,” said Mike Bergey, president and CEO of Bergey Windpower. “As the first and so far only manufacturer to use the J-FIT program to certify both a small wind turbine and tower, we are well-positioned to capitalize on the expected growth in the Japanese market. In fact, we are already seeing a dramatic increase in orders and expect to begin shipping several hundred more units to Japan over the next 12 months.”

The Bergey 10 kW is proving popular in Japan because it has only four moving parts, doesn’t require scheduled maintenance and carries the longest warranty (10 years) in the wind industry. Bergey certified a 100-foot tower for its 10-kW turbines, double the height of towers’ being offered with other small wind turbines in the market.

“The shorter towers offered by competitors in the market — which don’t have to be certified due to their height — will cause their turbines to suffer reduced performance and more wear and tear because of higher turbulence closer to the ground,” Bergey said. “Our pre-approved taller towers will provide an important market advantage as more small wind turbine models become certified and enter the Japanese market.”

Japan is one of the few markets that offer higher incentives for small wind compared with solar. Solar prices have dropped so much in recent years that Japan has been able to reduce its incentives while maintaining growth. It has the potential to be the largest market in the world for small wind turbines up to 20 kW during the next few years.

Bergey Windpower is the world’s leading supplier of small wind turbines, with installations in all 50 states and more than 100 countries. Bergey Windpower, located in Norman, Oklahoma, is a 38-year old family-owned small business. All of its products are manufactured in the U.S., and the company buys goods and services from more than 200 vendors in 27 states.