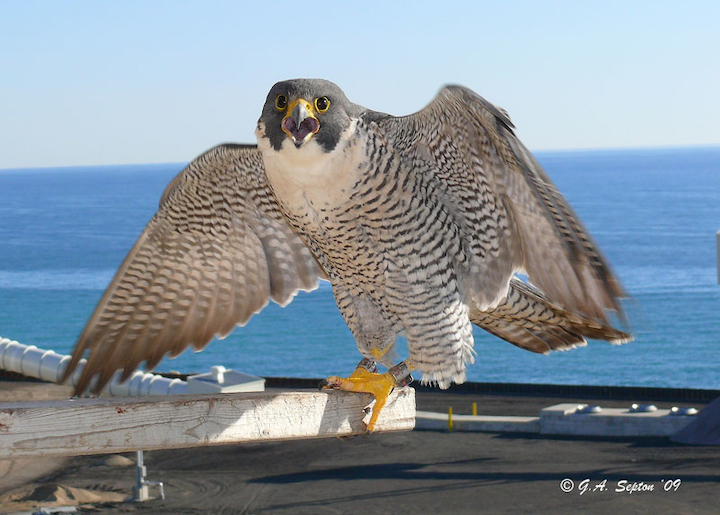 As an environmental consultant at We Energies, I’m usually working with our project teams to minimize our company’s impacts to natural resources and obtain environmental permits for utility projects. But this is no typical day. Instead, I find myself in front of a class of 4th graders.

Their hands are waving furiously, and their questions are rapid fire. “How fast can a peregrine falcon fly?” “How many eggs do they lay?” “Why do they live at power plants?” “How come peregrine falcons were almost extinct?” “How do they find a partner?”

It’s “banding day” at one of our power plants that hosts a peregrine falcon nest box. Four chicks hatched at the site, and our student visitors will get to name them and watch them get wildlife identification bands. But how did these birds wind up at our power plant to begin with?

Click here to meet the We Energies peregrine falcons

We Energies’ falcon story begins in 1991. Greg Septon, a Wisconsin peregrine researcher, approached our company with an idea. He wondered if We Energies would sponsor the release of captive-produced peregrine falcons at one of our power plants. The birds, he explained, were all but wiped out east of the Mississippi River and nearly extinct after the widespread use of pesticides decades earlier led to eggshell thinning. Captive-produced peregrines would be crucial in rebuilding this endangered species population.

But that was just part of the plan. The falcons also needed a place to nest and reproduce. The cliffs in Wisconsin where they nested historically were no longer as productive as they had been. Development had flourished during the decades of the birds’ demise, and peregrines began to acclimate to the urban environs of our modern world, where prey was plentiful and natural predators such as raccoons and great horned owls were far less of a problem.

Septon suspected the falcons would take to “urban cliffs,” if presented the option. He looked at the towering stacks of We Energies power plants, many right along the Lake Michigan shoreline — an important migratory route for raptors. Septon asked We Energies if the company would mount human-built nest boxes on its power plants. We Energies embraced the idea, and in 1991, nest boxes went up at power plants in Pleasant Prairie, Oak Creek and Port Washington, Wisconsin. The following year, We Energies sponsored the release of 15 captive-produced peregrines from the Pleasant Prairie Power Plant.

After that first burst of activity, it became a waiting game. Septon started wondering if his hunch would ever become a reality. Then, in 1997, the first successful nest was at the place where it all started — Pleasant Prairie. Two chicks were born at the power plant that spring, the first of what would become a long line of peregrine offspring at that site. Our Pleasant Prairie nest box has hatched nearly 60 peregrines to date, the most prolific of our nesting sites.

We Energies now has peregrine nest boxes at six power plants. Whenever our plants have added air quality control systems, we’ve incorporated nest boxes into the plans. At two of our power plants, nest boxes were literally engineered from the ground up and built right into the walls of the new stacks. Last year, the company’s peregrine falcon recovery effort hit a major milestone — more than 200 chicks have been hatched at We Energies facilities. Next year will mark the company’s 25th year of involvement in the peregrine recovery effort.

Why does We Energies do this? My company is committed to enhancing the quality of life in the communities it serves, and that includes a strong commitment to environmental stewardship.

Each spring, we encourage our customers to share in the excitement of the nesting season by following the activity on our website through live streaming video from our nest box cameras. Customers can watch the action from the time the eggs hatch until the chicks take flight. Our cameras allow customers to be within “arm’s reach” of this amazing recovery, from their own living room or kitchen table. Our falcon page also includes videos, hourly snapshots, annual nesting reports, an educational pamphlet for teachers and a blog that customers can follow for nesting updates.

Teachers are using the webcams as a tool in their classrooms, too. Greg Septon and I visit classrooms each spring to teach students about the falcon recovery effort. The peregrine falcon remains an endangered species in Wisconsin. The population is growing, but there’s much more to be done. I am confident this younger generation will continue the effort that’s under way by working to provide necessary protections and critical nesting habitat for this recovering species.

When I look into the eyes of the children who attend our falcon bandings and witness their excitement and sheer joy, I have no doubt they’ll do just that.