Despite lofty promises of a new pristine world filled with smart cities, sparkling waterways, solar panels and toilets for all, it is a mystery how Modi plans to get there 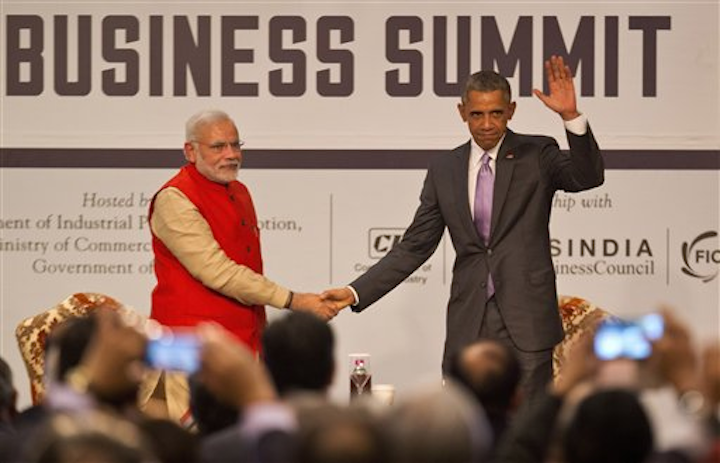 NEW DELHI (AP) — Four months after becoming prime minister, Narendra Modi stunned Indians by picking up a crude straw broom and, holding it like a dance partner, gently sweeping at a small pile of green leaves on a New Delhi street.

Modi, ever the darling of photo ops and grinning selfies, seemed to be calling for a cultural revolution, defying centuries-old hierarchies that make the idea of an official cleaning a street anathema in Indian society. By leading a new campaign called "Swachh Bharat Abhiyaan" or "Clean India Mission," Modi challenged those divisions while dignifying labor and elevating cleanliness as a nationwide goal.

That was the first and last time the public saw Modi with a broom. As he passes one year in office, India is as filthy as it ever was with some of the world's most polluted air, rivers stinking with sewage and more than half the 1.2 billion population still defecating in the open. Despite lofty promises of a new pristine world filled with smart cities, sparkling waterways, solar panels and toilets for all, it is a mystery how Modi plans to get there.

At the same time, environment experts say, the government is laying the groundwork to dismantle hard-fought laws for protecting the environment. With hundreds of millions mired in poverty, many believe economic growth at any cost is the only thing that matters.

The latest budget slashed environment funds by 25 percent, with little outcry. And business leaders have been effusive about Modi's leadership, crediting his constant globe-trotting with boosting investor sentiment and raising India's profile worldwide.

Modi's approach embodies "the idea that like the West we will grow and clean up later," said historian Ramachandra Guha. "But we don't have access to colonies like Europe had," he said. "There is no part of India where no one lives. If you excavate a coal mine, or build a factory on a river, you are depriving someone of land, or clean water, or forests."

Modi's promises on the environment include expanding solar power five-fold by 2022, ensuring everyone has access to a toilet by 2019, and cleaning the Ganges river of sewage and pollutants. The sanitation pledge alone requires building 70,000 toilets per day. The country is still 100 million toilets short of its goal while funds for sanitation were halved in the last budget.

Environmentalists worry most about what is to come from Modi's government. They point to a mounting assault on environmental protections meant to check pollution, prevent unfair land-grabbing and establish legal rights for tribal communities to oversee the land they live on.

Specifically, the critics object to the loosening of rules such as requiring local consent for mineral prospecting as well as to longer-term plans for overhauling the country's six keystone environment laws.

One of Modi's first acts as prime minister was to form a committee that within three months issued a report recommending a wholesale shift in environmental regulation. The recommendations include eliminating independent pollution regulators and having industries police themselves.

All project clearances would be handled by a single government-appointed panel and eliminate the need for forest communities to approve diversion of their lands for industrial use. The Subramanian Committee report also suggests revising the mandate of India's environmental courts so that they consider only existing law and not scientific arguments and other considerations.

While it's unclear which recommendations Modi's government will adopt, environmentalists believe it will embrace most of them within legislation soon to be presented in Parliament.

"If the laws aren't working properly, you don't just throw them out. You're supposed to implement them, or make them better," said Leo Saldanha of the Environment Support Group, which has campaigned against the report's recommendations.

"Most of these changes will have adverse implications for decades. Modi won't even be around to see the consequences of what he's doing."

Modi and many of his ministers have made clear they see India's environmental laws as roadblocks to economic development, holding up industry and halting infrastructure such as dams, highways and railways.

India's growth languished between 4 and 5 percent for several years as business confidence and investment wilted under the weight of chaotic bureaucracy, policy U-turns and epic corruption scandals. But economists forecast India to overtake China as the world's fastest growing economy this year with a 7.4 percent expansion.

Environmental degradation, meanwhile, is already costing India at least 5.7 percent of its GDP each year, according to the World Bank. Those losses are expected to increase as the compound effects of pollution sicken more people while more of India's forests vanish, soils continue to degrade and aquifers run dry.

Past governments have opened debate to communities and activists, but the Modi government has cracked down on groups such as the Ford Foundation, Greenpeace and Action Aid.

Critics warn Modi may be courting a backlash by undermining the rights of local communities and by sacrificing decades of environmental laws that required rigorous assessment of industrial consequences, even if those laws weren't always implemented.

Fishermen have begun protesting coastal pollution, while tens of thousands of farmers rallied last month against plans to make land acquisitions easier. A decades-long Maoist insurgency continues unabated and with support from forest-dwelling communities who also seek a greater share of the country's natural resource wealth.

"I have this feeling that all of this will ultimately go wrong," said Pushp Jain, director of a Delhi-based environment consulting group ERC.

"If they take away public hearings, which is where affected people can be heard, then you have a problem."