One of the largest wind farms off the German coast, the 295 MW Nordsee Ost offshore wind farm was officially inaugurated 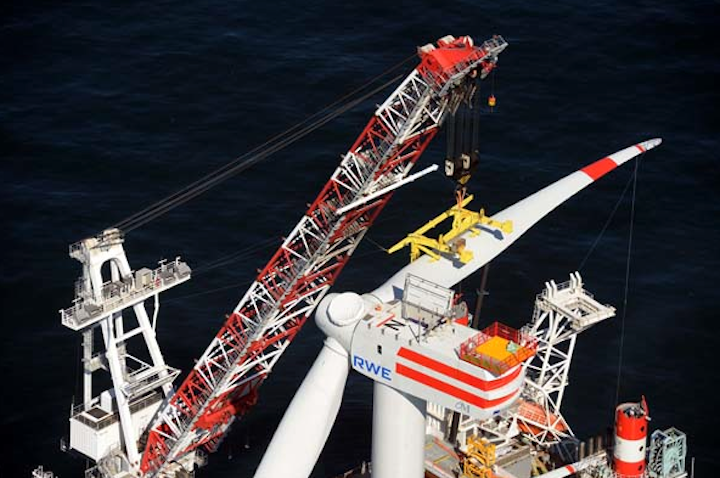 One of the largest wind farms off the German coast, the 295 MW Nordsee Ost offshore wind farm was officially inaugurated.

It is located about 22 miles north of Heligoland and covers nearly 9 square miles, with water depths of up to 82 feet. In total, 48 wind turbines will produce sufficient renewable power to supply the equivalent of about 320,000 households annually.

Sigmar Gabriel, German Minister of Economics: “Offshore wind energy is a strategically important element of Germany’s energy and climate policy and is key to the success of the energy transition. Thanks to its continuous input into the grid and its high electricity yields, offshore power generation makes a crucial contribution towards a diversified and reliable energy supply system."

Hans Bünting, CEO of RWE Innogy, adds: “At the end of this year, 40 percent of our power generation from renewables will already come from offshore power production.”

Construction was carried out from the base port in Bremerhaven. The foundations, tower segments, nacelles and rotor blades were stored, pre-assembled and loaded onto the installation vessels “Victoria Mathias” and “Friedrich Ernestine” at the Eurogate Container Terminal.

The individual components of the Nordsee Ost wind farm impress through their huge dimensions: With around 525 feet from sea level to the tip of the blade, the wind turbines stand higher than Cologne Cathedral. Each nacelle has a weight of about 385 tons and the dimensions of a detached house. Each rotor blade is nearly 200 feet long and weighs 25 tons. This equates to the weight of about six fully-grown elephants.

During construction, more than 37 miles of underwater cable were laid. That is about the length of the Eurotunnel that connects the UK with continental Europe. All 48 wind turbines and the substation have been linked by these so-called inter-array cables.