This article provides highlights of a privately funded study completed in September 2010 and compares some of the findings in this study with the observations made from a similar study conducted three years earlier. 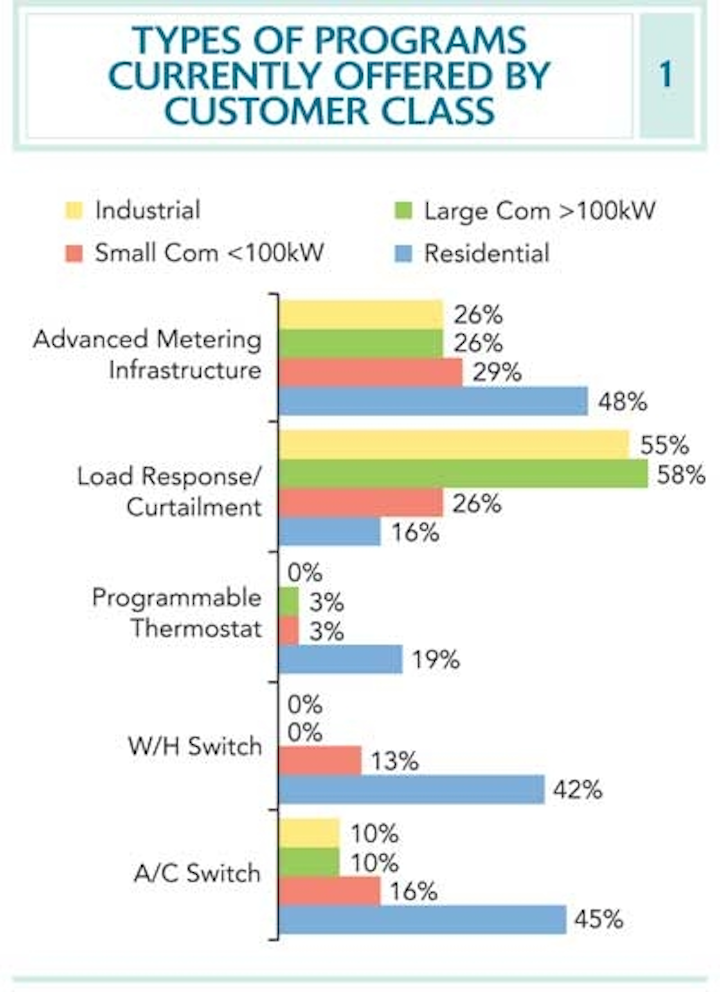 This article provides highlights of a privately funded study completed in September 2010 and compares some of the findings in this study with the observations made from a similar study conducted three years earlier.

Thirty-eight percent of the 70 utility officials participating in the latest privately funded Newton-Evans Research Co. survey indicated demand response (DR) programs were underway at their utility as of September 2010.

Forty percent of the utilities indicated plans to implement some form of load management program at their utility during the 2011-2013 periods. These seven utilities accounted for more than 30 million end-use customers, or about 21 percent of the total served U.S. electricity customer base.

As of the close of third quarter 2010, nearly half of the 70 participating utilities with some form of load management program were using air conditioner switch control, and about one-fourth planned to add this capability. Forty-two percent stated current water heater switch controls, and 19 percent plan to add this capability. Nineteen percent already had programmable thermostat installations, and more than one-third indicated plans to add this capability. Only 16 percent indicated any load response or curtailment feature for residential, and only 6 percent plan to include this in the future. Advanced metering infrastructure (AMI) was noted as already implemented to some extent in 48 percent of the utilities, and 23 percent indicated having plans to add AMI.

Sixteen percent cited use of air conditioner switches for their small commercial customer base, and 10 percent plan to add this. Thirteen percent cited some use of water heater switches. Only 3 percent had any programmable thermostats installed at their small customer sites. Twenty-six percent indicated some use of load response or curtailment. Twenty-nine percent had installed some AMI meters, and 6 percent plan to do so.

Ten percent of utilities indicated some use of air conditioner switches; none had any water heater switches installed or planned. Only 3 percent had any programmable thermostats. Load response and curtailment was the most popular form of load management capability for this segment of the customer base. Twenty-six percent had some AMI implementations, and 16 percent plan to add more AMI here.

Ten percent of utilities reported any use of air conditioner switch control; none had water heater switches or programmable thermostats in place or planned. More than half (55 percent), however, had a load response or curtailment program. Twenty-six percent of respondents with some demand response plan cited use of AMI. Three respondents plan to add AMI to their industrial customers. (See Figures 1 and 2 for types of programs offered and planned for small commercial, large commercial and industrial customers.)

Air conditioner and water heater controls were most popular with residential customers, and some use was reported among some small commercial customers. Load response and curtailment programs were in place at 5.4 percent of industrial customers but in significantly lower rates for the other customer groups. AMI was popular among all four customer classes (ranging from 54 to 69 percent).

Forty-one percent stated that they were likely to replace their current residential direct load control solution in the next four years. Fifty-eight percent of officials plan to provide enabling technology that will assist customers automate their responses to dynamic pricing.

Sixty-eight percent of officials stated that they offer a single-purpose system to customers, while 18 percent provide a home energy management device, and 14 percent provide both to at least some residential customers (see Figure 3). 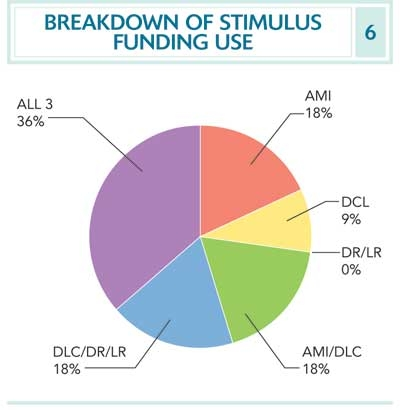 Half of the officials responding thought this approach will change in the near future. Just more than one-fourth (27 percent) of respondents said the increased penetration of distributed generation will be problematic for load balancing in the near term.

Challenges to Expansion of LM Programs

Officials were given a list of five possible challenges they face regarding expansion of their load management programs. The most important of these among this sample was customer engagement, cited by 59 percent of the group. Thirty-eight percent cited challenges with IT complications or lack of cost-effective solutions. Twenty-two percent checked regulatory approval processes or insufficient personnel to actively sign up participants in their load management program. One-fourth of the group provided other reasons (see Figure 4). 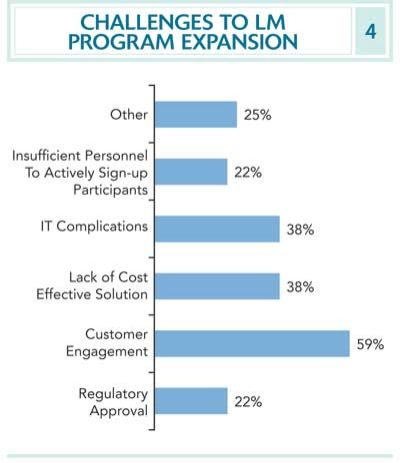 The average among all utilities with active demand response or load management programs in place in 2010 indicated the average reduction in peak demand was 4.13 percent for summer and a 3.21 percent reduction for winter peak. Response ranges were wide, but almost all were below a 10 percent reduction level. 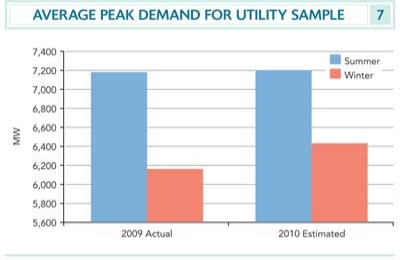 In the similar 2007 study, officials were asked to indicate the actual and estimated megawatts of peak demand experienced by their utilities. Among the 43 utility officials replying to this question, the average actual peak demand for summer was about 5,570 MW and for winter about 4,085 MW. For those who estimated megawatts of peak demand, the averages were somewhat higher, standing at 6,059 MW for summer and 4,536 MW for winter. Investor-owned utilities (IOUs) and very large utilities reported a significantly higher level of actual and estimated peak demand than their counterparts at other types of utilities and smaller utilities did. 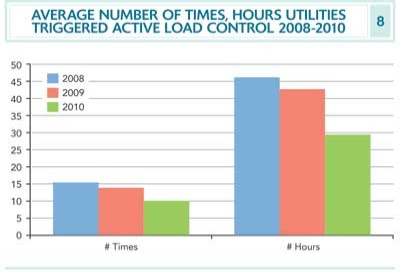 From the information obtained from 46 utility officials in the 2007 demand response study, a disparity was noted between the frequency of invocation of active load control programs among utilities based on type. IOUs were less likely to have activated load controls and for shorter periods than were their counterparts at municipals and especially cooperatives. Similarly, small and mid-size utilities were likely to activate load control programs more frequently and for longer durations than were large utilities.

Demand response officials were presented with a list of eight statements concerning load management. The most important—strong agreement—was for the statement, “We are able to gather timely and accurate load information,” while the statement, “Our present load management system is sufficient for our short-term needs,” followed. Third in importance was, “We have adequate load forecasting and load-profiling technology,” (see Figure 9). 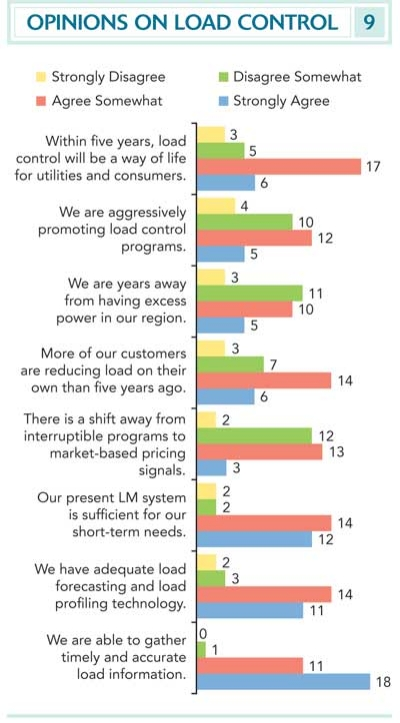 What to do When Consumption Rates Approach Capacity

Officials were presented with a list of seven specific strategy options and space to write other remarks as power consumption rates approach production capability or planned purchase capacity. Most important among these officials were, “Perform integrated resource planning,” (47 percent cited this) followed by, “Expand/promote additional LM and/or DR/LR programs,” (43 percent). Forty-three percent also indicated they would, “Develop a plan for LM and/or DR/LR programs.” One-third indicated, “(The) situation does not apply to our utility,” or they would “purchase excess capacity from other sources” or both (see Figure 10). 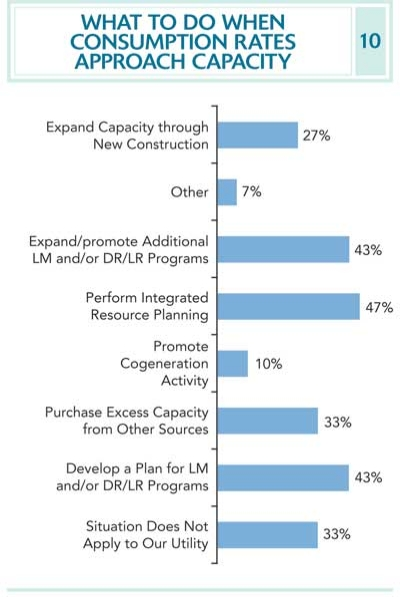 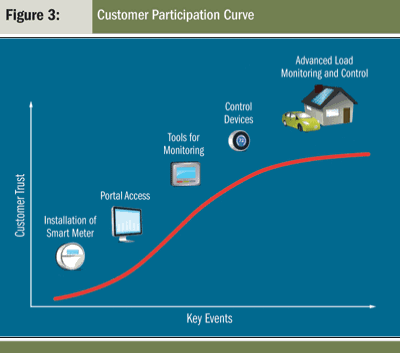 Charles “Chuck” W. Newton is president of Newton-Evans Research Co. A graduate of Fordham University and Loyola University of Maryland, he has been a 35-year researcher of information technology products, markets and trends. Since 1983, that research commitment and organizational work effort has been focused on the world’s electric utilities and energy pipelines.