Solutions for Integrating PV Into the Grid 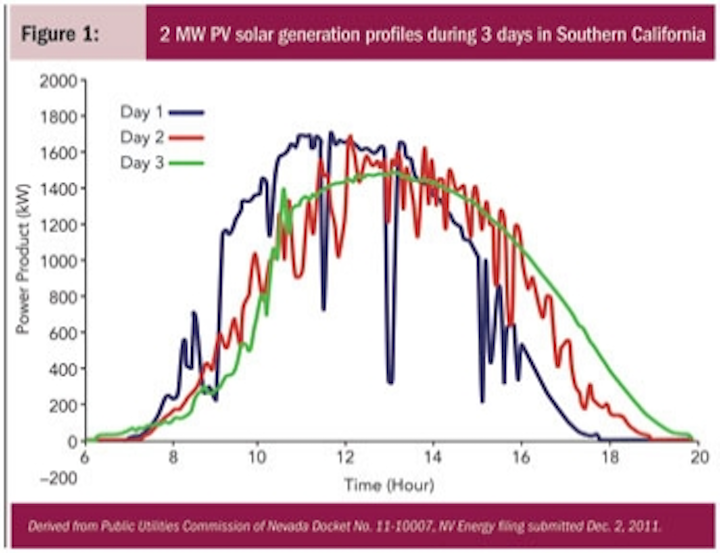 This burgeoning economic case results from a combination of incentives such as solar renewable energy credits (SRECs) and mandates including renewable portfolio standards (RPS) and because solar solutions-especially when they have smart grid and other functionality built in-can be packaged into profitable business propositions without subsidies. As these forces grow solar power's prominence, power grids must handle far more photovoltaic (PV) input than before. To accomplish this, solar power and the grid have some growing up to do.

Large-scale solar power faces significant challenges integrating into the grid. Centralized solar generation, including large PV arrays, or solar farms, can be subject to intermittency. Even in the sunniest climates, clouds inevitably pass over solar farms, resulting in problems such as voltage fluctuations, distribution losses and reduced power quality and power balancing. In the worst case, this can result in lower power reliability for end users, and utilities feel the effect via increased wear and tear on grid hardware. Solar generation can make capacitor banks, breakers, voltage regulators, load tap changers and other power equipment work harder and wear out faster. PV's potential stress to the grid coincides with pressures from other rapidly developing technologies, such as electric vehicles, which will call for grid upgrades.

Several opportunities exist to hasten massive PV integration into the grid. Primary among them is highly distributed PV generation because higher degrees of PV distribution deliver a more stable power supply and reduce impact on grid assets. Standard PV inverters are not optimized for interfacing with the grid; maximum PV penetration requires developing the right inverters for the job. Also, PV's business case can be designed to promote rather than inhibit PV's growth (see Figure 1). 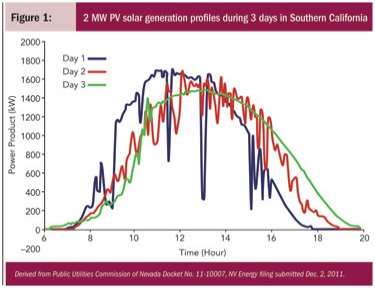 Throughout power grid history, the most reliable strategies for providing power have relied on a diverse mix of power generation. In PV's case, that generation diversity is best manifested through geography. When generation is concentrated in one location, however, local weather such as cloud cover or snow can affect an entire solar power plant's output. With PV plants' reaching 100-MW capacities, local weather can affect enormous amounts of electrical output, potentially impacting local businesses, hospitals, schools and other power consumers.

As we have seen in Public Service Electric and Gas' (PSG&E's) ongoing installation of up to 200,000 Petra Solar PV panels throughout New Jersey, when PV is installed as a virtual power plant (VPP) in a highly distributed network, weather risk attenuates. A statewide or regional network of strategically distrusted PV generation offers consistent power throughout the network because weather impacting one part of the distribution region is unlikely to affect other parts of it simultaneously (see Figure 2).

Such distribution also has economic benefits. While solar farms achieve some economies of scale, these land-intensive projects can fall victim to regulatory entanglement. Distributed systems, however, can be installed on available public infrastructure such as utility and lighting poles, highway infrastructure, public buildings' rooftops and publicly owned marginal land. Such installation schemes usually can be implemented faster than solar farm construction, bringing solar power online incrementally throughout an installation project rather than forcing communities to wait for project completion to reap new power. VPPs also provide opportunities to add smart grid functionality, such as power monitoring and conditioning and grid communications, from the distributed points of PV generation.

The only way PV generation will integrate with the grid on a large scale is for it to grow up and act like any other power plant. To reach this maturation piont, associated technologies-especially inverters, energy storage and weather forecasting-must continue to evolve. Inverters must handle reactive power better so PV can operate in closer proximity to other generators. They must offer better ramp control to mitigate the effects of sunlight loss. Finally, these technologies must offer smart grid functionality such as power conditioning to add to their value and to add value to solar's business case.

Once PV generation functions like any other generation source, it will be dispatchable. System operators will be able to request a certain amount of power and know they will receive it. For PV, this will require better and lower-cost energy storage technology and better weather forecasting systems for centralized and distributed generation so system operators can plan more accurately around likely sunshine and resulting power output.

Because recent solar subsidies have a limited lifespan, PV also must present an enhanced business case to utilities if they are to implement solar on a large scale. Ever-cheaper solar panels are only part of making PV more affordable. More important is the ability for PV to build a comprehensive value package of which generation is only a part.

Highly distributed PV systems can do this by adding value with smart grid communications, power monitoring, power condition and other ancillary services. In these cases project capital costs may be higher, but with enhanced return on investment, overall project payback arrives more quickly and levelized cost of electricity is lower.

Building such a value proposition, which expands beyond power generation alone, has been core to enabling utility executives to implement systems such as integrated PV and smart grid solutions.

Understanding how peak power usage interplays with PV generation is also critical to maximizing PV's value proposition. Solar generation holds advantages over wind power because solar's peak production naturally comes during peak load and commands higher rates, whereas wind generation tends to produce more at night when power is in lower demand and sells for less. Further, there are ways to maximize solar's peak-pricing advantage. For example, tilting solar panels slightly to the west can be more profitable because they generate less power overall but produce more power during peak use.

Finally, distributed systems offer cost advantages because they skirt siting, permitting and other regulatory obstacles that can hamstring centralized solar generation and add greatly to their costs. Because distributed PV generates power close to its point of use, distribution power loss is mitigated and no new distribution or transmission infrastructure, like that for accommodating centralized solar farms, must be built.

Because highly distributed PV assets begin feeding power to the grid immediately upon installation, they also offer opportunity cost advantages over large solar projects that might not produce power throughout their multiyear construction.

While PV is maturing beyond the point of total reliance on government incentives, mandates and other policy, smarter standards are required for PV's integration with the grid. Many standards regulating PV's interaction with the grid were enacted 20 years ago when PV power production was small and the main objective was to ensure home solar production did not interfere with grid operations.

Creating solar VPPs in which inverters act within the grid like traditional generation sources requires a refreshed regulatory framework based on today's technology picture. Energy efficiency policies are critical to solar development; lowering overall energy use eases overall stress on the grid and generation and allows PV generation to assume a higher percentage of overall production.

In coming decades, PV power will make up a substantial part of many local generation portfolios. With maximum distribution of generation, the right inverters, smart business models and realistic policy, we can look forward to welcoming solar power's clean, reliable contribution to our power supply.

Johan Enslin is the chief technology officer at Petra Solar. He has consulted more than 80 U.S., European, Asian and African power utilities, governments and companies, written more than 250 technical journal and conference papers and secured 14 patents. He is a registered professional engineer, Fellow of the SAIEE and Senior Member of the IEEE. He also has a doctorate in psychology.