San Antonio was cool, gray and sometimes rainy the last full week of January, but things were anything but dreary at the Grand Hyatt ... 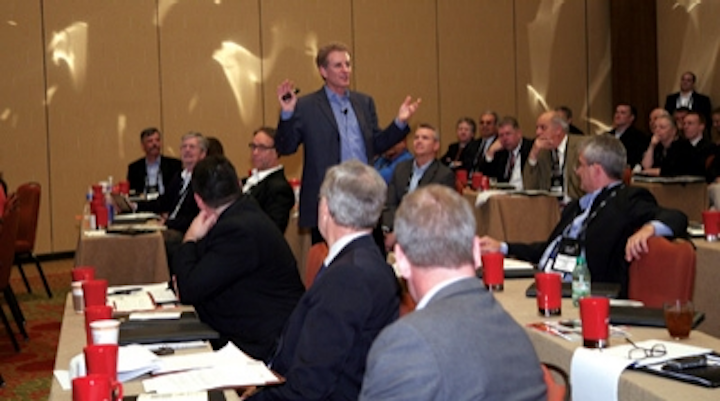 by Teresa Hansen, editor in chief

San Antonio was cool, gray and sometimes rainy the last full week of January, but things were anything but dreary at the Grand Hyatt San Antonio and the Henry B. Gonzalez Convention Center, home to the third annual Electric Light & Power Executive Conference and the 22nd annual DistribuTECH Conference & Exhibition, respectively. More than 8,500 people attended DistribuTECH, the Utility Products Conference & Exposition and the Electric Light & Power Executive Conference.

Ken Devore, Southern California Edison (SCE) director of Edison SmartConnect, told attendees that customer engagement is as important to SCE’s smart grid project as its technology. He said smart grid doesn’t mean much to customers, but smart meters are more tangible. Devore said SCE has found “edutainment”—YouTube videos that educate and entertain—to be a successful way to engage customers. He said it’s important to listen and learn before you begin to communicate with customers. He said SCE is doing its best to educate customers and get them to embrace smart meters so it can avoid the customer backlash that PG&E, its neighbor utility in northern California, experienced when it began rolling out smart meters.

Executive conference attendees also learned some of the latest on integrating variable generation into the grid. Clair Moeller, Midwest Independent System Operator (MISO) vice president of transmission asset management, discussed impacts of variable generation, mostly from wind, on MISO and how it has adjusted. He said good forecasting is vital to successful wind and solar integration and smart grid will increase flexibility, helping operators deal with variable generation. Moeller said smart grid is the top smart application, and while energy storage could have the highest impact on variable generation, it is not cost-effective. In addition, Moeller discussed the economics of renewable energy in the MISO territory, which gets about 80 percent of its electricity from coal-fired power plants. MISO’s older and dirtier coal plants will be retired, and much of the capacity gap will be filled with renewable energy.

“The reality of renewable economics is improving in places where coal is being retired or large retrofit projects are needed,” Moeller said.

Attendees also heard from two keynote speakers, economist Todd Buchholz and former New Mexico Gov. Bill Richardson. Buchholz presented his outlook on the U.S. economy, as well as global economics. Among other things, Richardson spoke about the U.S. political environment and gave his prediction on the upcoming presidential election.

An awards banquet Sunday evening honored Electric Light & Power magazine’s Utility of the Year, Oklahoma Gas & Electric, and its CEOs of the Year, Robert Heinz of Dawson Public Power District in Lexington, Neb., and Gale Klappa of Wisconsin Energy Corp. You may find out more about these two gentlemen on Page 18.

Several Electric Light & Power Executive Conference attendees stayed in San Antonio to attend DistribuTECH’s Tuesday keynote—the event’s official kickoff. They heard three great speakers. Doyle Beneby, president and CEO of CPS Energy in San Antonio, talked about the utility’s initiative to become greener by closing coal-fired plants, adding renewable generating sources and improving operations. In addition, he talked about some of the agreements CPS has entered into with companies that have brought hundreds of new jobs to San Antonio. Bill Harmon, residential marketing and product development vice president at Houston-based Reliant, discussed the importance of engaging customers and some of the progressive programs Reliant is using to do just that. Ben Stein closed the keynote with his dry, witty insight into our country’s economic and political situation.

As in past years, the Electric Light & Power Executive Conference was a successful event that brought together many industry executives. It provided a great place for them to network, learn, exchange ideas and simply have some fun. Join us Jan. 28 and 29, 2013, in San Diego.