The Enel Group is investing approximately $650 million (US) in the construction of Villanueva. The solar facility, which comprises over 2.3 million solar panels across 2,400 hectares in the Mexican semiarid region. 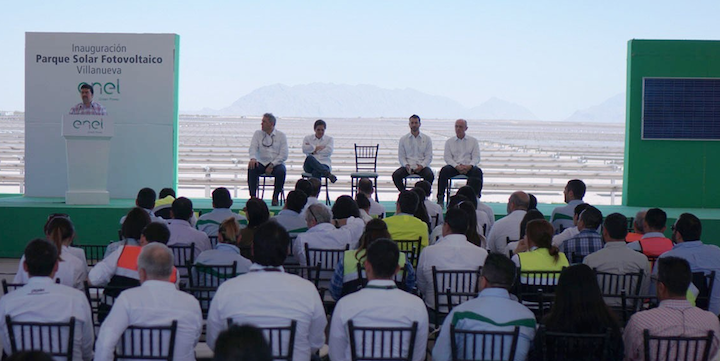 The third and largest solar photovoltaic (PV) park at the Villanueva plant in Viesca, Mexico was celebrated last week.

Enel Green Power Mexico inaugurated the 754 MW Villanueva solar PV plant in Viesca, state of Coahuila. It follows the start of partial energy production by the 427 MW Villanueva 1 park, which along with the 327 MW Villanueva 3 park composes the overall PV facility.

Once fully operational, Villanueva will be the largest PV facility producing energy in the Americas and Enel’s largest solar project worldwide, the company’s release said.

“The inauguration of Villanueva is a milestone for Enel Green Power and Mexico itself, as it is the first power plant to start operations after the country’s energy reform,” Antonio Cammisecra, head of Enel Green Power, said. “We have taken a major step towards a more sustainable future for the country while consolidating our leadership in Mexico’s renewable market and once again delivering effectively on the projects awarded in renewable tenders.”

The Enel Group is investing approximately $650 million (US) in the construction of Villanueva. The solar facility, which comprises over 2.3 million solar panels across 2,400 hectares in the Mexican semiarid region, will be able to produce more than 1,700 GWh per year once fully operational in the second half of 2018.

The tests were performed across a 10 MW, 20-hectare area where automated machines guided by GPS were used to carry out earthworks and laying cables, which specifically allowed for the installation of cables eight times faster than manual installation, as well as reducing by 30 percent the gasoline consumption of the machines used.

In line with the Creating Shared Value (CSV) model adopted by Enel Group, which aims to combine business development and local community needs, EGPM has carried out initiatives in the surrounding areas of the plants to enable income generation for local stakeholders. These initiatives include the training programmes in local communities on how to make furniture from 2.6 tons of pallet wood and boxes used in Villanueva’s construction works. In addition, 600 additional hectares, complementary to the construction area, are being used for the relocation of specimens of local flora and fauna.

The overall 754 MW Villanueva facility is supported by a contract allowing the sale of specified volumes of energy for 15 years and clean energy certificates for 20 years to Mexico’s Federal Electricity Commission, according to the company.