California may require solar panels on every new home

This is the state's latest step to curb greenhouse gas emissions 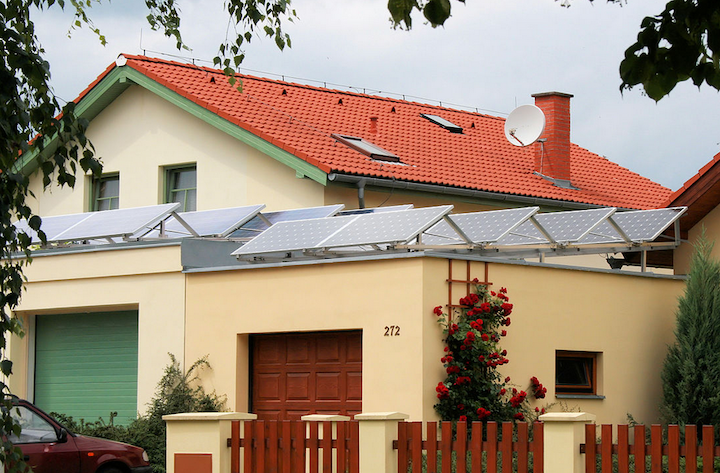 SACRAMENTO, Calif. (AP) — Jumping out ahead of the rest of the country, California on Wednesday moved to require solar panels on all new homes and low-rise apartment buildings starting in 2020.

The new building standard — unanimously approved by the five-member California Energy Commission — would be the first such statewide mandate in the nation. It represents the state's latest step to curb greenhouse gas emissions.

"You can bet every other of the 49 states will be watching closely to see what happens," he said.

The requirement would apply only to newly constructed homes, although many homeowners are choosing to install rooftop solar panels with the help of rebate programs.

Adding solar panels would boost construction costs by $9,500 for a single-family home but save owners about $19,000 in energy and other expenses over 30 years, the commission estimated. The price of solar has dropped dramatically in recent years.

The minimum amount of solar power required by the new standards wouldn't be enough to meet all the needs of most homes. They would still have to draw some of their electricity from the power grid.

California, the most populous state, with nearly 40 million people, has positioned itself as the nationwide leader on clean energy, pushing for more electric vehicles on the roads and lower emissions from homes and commercial buildings.

"This is a very bold and visionary step that we're taking," said David Hochschild, a member of the commission.

Representatives of the construction, utility and solar industries all helped develop the new standard, and no industry groups spoke in opposition Wednesday.

"California is leading the nation with its ambitious targets for energy efficiency and clean sources of energy,” Kelly Speakes-Backman, CEO of the Energy Storage Association (ESA). said in a statement, adding that the state "proves that solar energy is no longer a niche power source. We applaud the California Energy Commission’s decision, and the energy storage industry looks forward to supporting the implementation of this visionary initiative for support a more resilient, efficient, sustainable, and affordable electricity grid.”

But Republican legislative leaders argue Californians cannot afford to pay any more for housing in what is already an extremely expensive market.

"That's just going to drive the cost up and make California, once again, not affordable to live," Assemblyman Brian Dahle, the chamber's GOP leader, said Tuesday.

The regulations include exceptions for when solar panels aren't cost-effective or feasible, such as on a home shrouded in shade. Community-shared solar generation equipment will also be an option.

California is already the nation's No. 1 market for solar installation. More than 5 million homes in the state use solar power, according to the Solar Energy Industries Association.

California has set a goal of all residential buildings being "zero net energy," meaning they produce as much energy as they consume.

"This is a step, a very important step, in a long trajectory that we have been planning for and telling the world," said Energy Commissioner Andrew McAllister.

"This is not a radical departure — it's a step in the right direction to reduce our greenhouse gas emissions and improve our air, which for many, many decades California has been doing better and better each time."