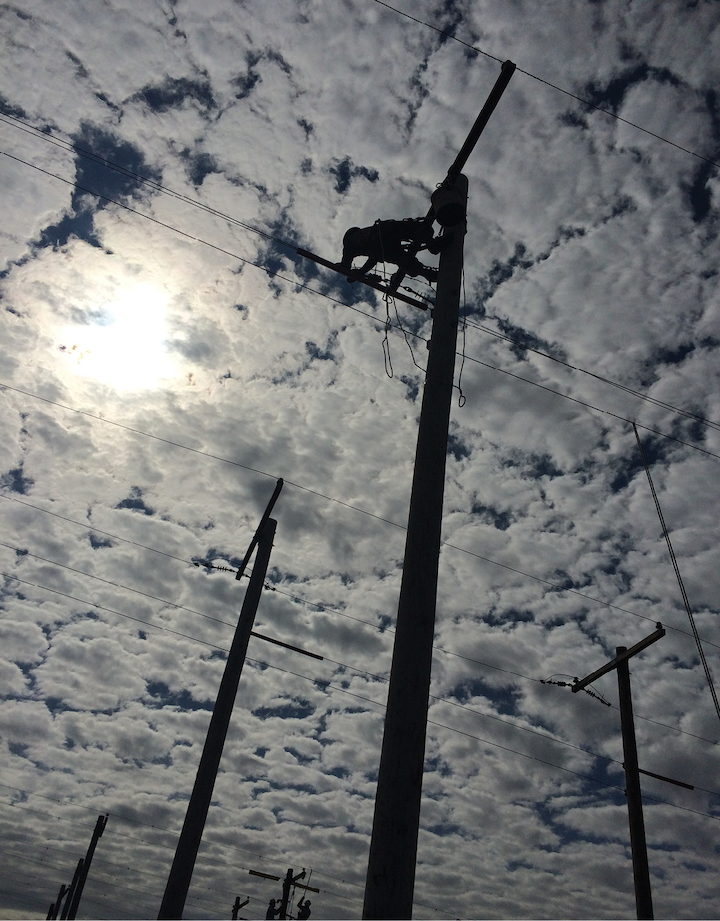 More than a decade ago, I set out looking for insurance and enough income to raise a family, but linework has given me so much more.

I grew up in a small town in a dusty corner of West Texas. The local economy supports enough “good jobs” that a decent percentage of the population can call themselves affluent, but there are still plenty of families barely scraping by. The rich kids go to school alongside the poor ones, but no one really notices.

About a year after high school graduation, I was talking with one of these so-called rich kids. We had both just flunked out of college, and we were discussing our unclear futures. Honestly, I was scared that I had squandered my only shot at a decent living, and I was worried about what lay in store for me. He didn’t seem to be nearly as worried. He told me he was planning on getting his passport and backpacking across Europe. “You know, just go out and really find myself, man.”

“It must be nice,” I remember thinking to myself. The kids whose parents had deep pockets went on lavish trips to far away continents on journeys of self-discovery. Meanwhile, the rest of us were stuck, finding what we could scattered along the paths of our daily struggles to pay bills and feed our families. To add to my list of worries, my girlfriend, who was a waitress, was six weeks pregnant. My short-lived teenage dream had derailed and crashed somewhere between broke and clueless.

I somehow landed a job with my hometown electric cooperative as a groundman. The job paid more than I was worth and it offered health insurance, something we desperately needed. I walked through those doors on the first day having no idea what a groundman did. I thought I would be doing landscaping. God takes care of puppies and idiots.

After a full day of orientations and paperwork, I was taken to meet the crew. The line superintendent drove us down a county road 20 miles west of town until we reached the right of way. The crew was gathered around the foreman’s pickup on the side of the road, and as I went around the group shaking hands and introducing myself, a combination of leather, sweat, and Copenhagen filled my nostrils. “This is a rough bunch,” I thought nervously.

My first glimpse at linework was an old journeyman who had been nicknamed “Papaw” because of his age in relation to the rest of the crew and his slow Texas drawl. He sauntered up to a 40-foot pole, donning his climbing gear. He slung his scare-strap over his shoulder and free-climbed up the pole as casually and smoothly as if he were walking across the street. When he reached the top, he belted off, looked down at me and smiled. I looked over at my superintendent with an anxious smile and asked, “Groundmen don’t have to do THAT, do they?”

Learning to climb hurt. After only a few minutes on the pole, my feet would begin to throb. My back would ache and my hips would scream out in pain. I was using muscles I had never used before.

I lived in a constant state of soreness those first weeks, and I walked around like a whooped pup, partly because I was in pain, partly because I wanted the guys to feel sorry for me. Also, I was afraid. I was afraid of climbing to the top of those tall poles, and I was terrified of the wires atop them. I had a family now, and they expected me to come home alive every day.

After two solid weeks of self-pity and fear, one of the journeymen took me aside and gave me some of the best advice I’d ever been given. He said, “Quit feeling sorry for yourself because we’ve all been through what you’re going through. Now, you’ve got a decision to make. You can be a lineman or you can be a [expletive], but you can’t be both.”

Although I still had a long apprenticeship and many challenges ahead of me, I made up my mind that day to be a lineman, and I never looked back.

I owe a debt of gratitude to that group of men who taught me the trade. Taking a boy who couldn’t even lace up his own line boots by the hand and teaching him to do a man’s job is frustrating work, and though I’ll spend the rest of my career doing my best to pay it forward, I’m not sure I’ll ever step out from beneath their shadow.

It’s been over a decade since I got in the trade, and I’ve been on many different crews in many different locations. I don’t know if my high school buddy ever found what he was looking for in Europe. As for me, I set out looking for insurance and enough income to raise a family, but linework has given me so much more. I put my faith in the lines that crisscross our nation, and in return they showed me who I am. They gave me a purpose that I’ve used like a compass on my journey, and I found myself along the way.

I found myself in devastated communities, arriving in the wake of Mother Nature’s fury. Tornadoes, ice storms, and hurricanes: they all taught me a little more about myself. I found a big piece of myself in Puerto Rico after Hurricane Maria. The people of that island showed me true hospitality, and they taught me how to stand back up after adversity kicks you in the teeth. I found bits of myself every time my lineman brothers and I stayed out all night howling at the moon, and I found even more of myself when I finally learned to put the bottle down and take care of my family the way they deserve.

Linework has been the backdrop to my entire adult life. It’s taken me all over the world, and I can say with confidence that I know exactly who I am. I’m a lineman.

Now I find myself in somewhat unfamiliar territory. Using the pages of this magazine, I will try to express my passion and perspectives on the trade that has shaped me. I’ll tell stories, some of my own and some from the people I’ve met along my journey. I’m excited for the opportunity, and I hope to do it justice.