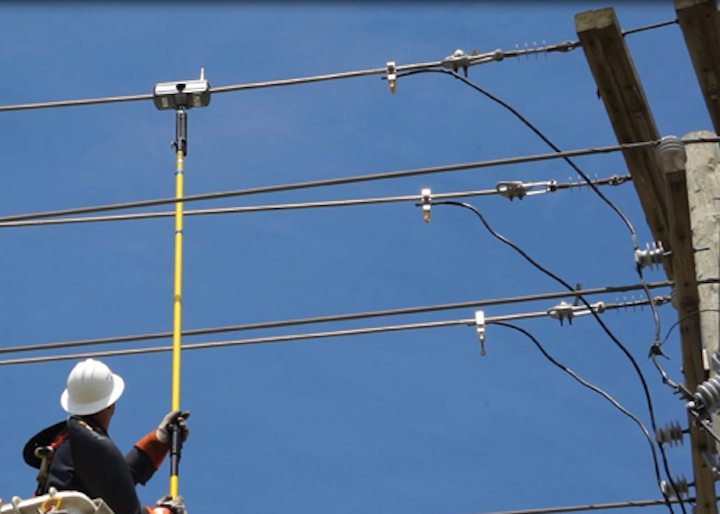 Current utility outage management systems (OMS) rely heavily on customer call-ins, but the reality is that fewer customers are reporting outages. In fact, utilities report that less than 30 percent of customers ever call in. Customers tend to assume that utilities are automatically aware of power-loss issues, but also driving the lower call numbers are the lifestyles of today’s busy families, which are increasingly absent from the home during the day. 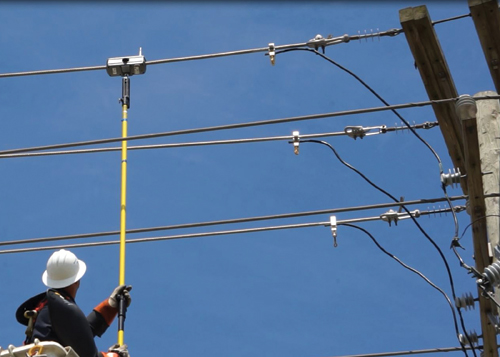 Utilities can install Aclara’s smart grid sensors on power lines with a hot stick, a simple process that is more cost effective than alternative methods of grid monitoring.

With OMS requiring at least two customer call-ins under a protective device — such as a fuse, sectionalizer, recloser or breaker — to determine which device has caused the outage, utilities that rely solely on OMS face mounting challenges in identifying, locating and responding to outage-causing faults.

Based on advancements in sensor technologies and data analytics, utilities now have the tools to augment their OMS capabilities. Today’s smart infrastructure solutions, such as grid-monitoring with smart grid sensors and software-based fault detection solutions, can provide utilities with both supplemental outage notification and locational data without the need for relying on customer reporting. These technologies can also spot and determine the extent of an outage in remote areas or in places where few people reside, such as vacation communities in the off-season, before anyone can actually call in the outage.

Challenges in Responding to Power Outages

For utilities to respond efficiently and effectively to power outages, they must be able to accurately pinpoint both the extent and specific locations of a power loss. There are, however, several challenges to ensuring precision when making these assessments. In addition to lower call-in volumes, the logistics associated with power outages can make it difficult for utilities to determine exactly which households are without power.

In the event of a large outage with a notable break in the line, it is common practice for line crews to fix the fault and then drive around the affected area to look for other damage. But with trees and other visual obstructions, including wires that often run behind homes, crews may not see a single-­customer outage, known as a “nested outage.” 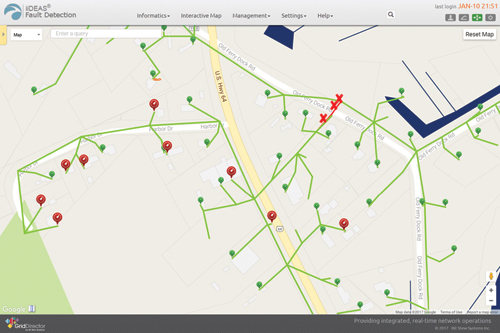 A fault detection and localization algorithm developed by Aclara analyzes AMI data in near real time to identify faults.

When the customer comes home, finds the lights out and calls in, the line crew then must come back to fix the outage. This can disrupt the crew, as they might already be many miles away working on the next known outage. In nested outage cases, it is often reported that even when customers are home they think the utility knows that the lights are out and have not called in for many hours or even into the next day, resulting in unhappy customers.

Another common challenge for utilities is monitoring for outages in vacation communities where a significant portion of the residents are absent during the off-season. There are many residential areas with cabins and cottages that are used only seasonally, but still require power throughout the entire year for uses such as refrigerators and freezers. When the power is lost during the off-season and nobody reports it, the outage can extend for hours and sometimes days, resulting in problems such as food spoilage. Often when this occurs and customers call in upset, the utility will elect to pay for the spoiled food to maintain customer satisfaction.

While technology has created a new environment of customer expectation, it also provides new opportunities for faster and more accurate solutions. Advancements in grid monitoring systems are enabling utilities to better pinpoint the extent of outages quicker through smart grid sensors and data analytics. These technologies do not replace OMS but instead augment these systems for the most effective solution possible.

For a utility, this can mean quicker and more accurate response to power outage situations. Importantly, the ability to pinpoint the location of an outage also increases public safety, as power outages can present considerable risks from downed power lines or poles, downed energized wires or non-functioning street and traffic lights.

Using an OMS, utilities can determine (with at least two customer call-ins) which protective device has caused the outage but not the site of the actual fault. In many cases, these protective devices can be several miles from the actual problem that caused the device to fail. But grid monitoring using smart grid sensors for collecting and transmitting data can help utilities gain real-time visibility across their electrical networks.

Some smart grid sensors are powered inductively by primary lines, thus eliminating the need for batteries. They are placed directly on power lines and can detect faults with real-time information. Communicating smart grid sensors can even identify the location of a “hot break,” where a wire has broken or gone down without causing a protective device to open. By providing much greater precision in locating the specific problem, crews in turn can respond to the problem much more quickly, allowing them to make the area safe. 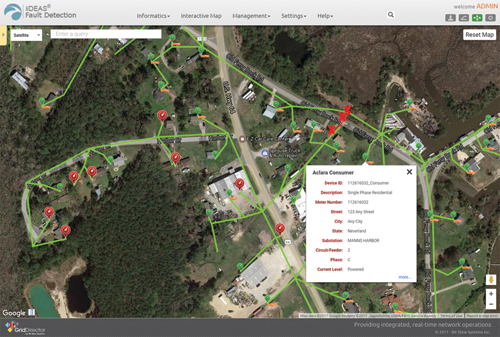 Results from fault detection and localization driven by AMI data can overlay on maps, indicating exact locations of faults and offering the ability to drill down into exact locations.

In addition to increasing the safety for customers, smart grid sensors also benefit the crews themselves. The utility staff will commonly drive long lengths of a line checking for the cause of an outage, known as “patrolling the lines,” and the protective device where they begin might be many miles from the actual break or fault. This patrolling is often done during potentially dangerous weather conditions when many outages occur. A correct location provided by sensors will drastically reduce the amount of drive time, which can make a significant difference during adverse weather conditions.

Using grid monitoring with smart grid sensors is a faster and more cost-effective way to gain situational awareness of grid conditions than traditional methodologies such as telemetry. Such traditional technologies used for monitoring distribution networks can take months or longer to implement. They are often costly and demand significant coordination among several divisions within the company.

In addition, traditional approaches can often involve the use of paper chart recorders or analog meters and the requirement for personnel to drive to each substation and read the data manually, record it on spreadsheets and then share it with team members. With smart grid sensors, data is sent directly back to the utility for analysis.

Another tool for utilities to use is software technology that leverages advanced metering infrastructure (AMI) to identify faults. Certain technologies can use the existing traffic on an AMI network without impacting the normal AMI communication traffic. By interweaving AMI traffic with strategic communication to devices that could be off — and employing software algorithms that take into consideration the prior outage history of the device or line section, the communication performance of the device, the communication performance of the collector, and the current state of neighboring devices — these technologies can predict with a high degree of confidence the probability that a device might be off or a line section unpowered.

The fault detection and localization (FD&L) solution developed by Aclara, for example, automatically displays outages, identifies fault locations and verifies restorations by analyzing the AMI data that is being transmitted, or not transmitted, from the meter. The software provides more detailed data directly to OMS systems, eliminating the need for customer calls and reducing System Average Interruption Duration Index (SAIDI) outage times, which calculates the length of time, on average, that anyone on a system might experience an outage.

The use of FD&L, along with sensor technologies, also can improve requirements associated with a utility’s Customer Average Interruption Duration Index (CAIDI), which measures how long affected customers are without power.

Locating faults faster without relying on customer calls allows for a quicker response and enables crews to work on problems with greater precision and efficiency. Accurately identifying nested outages by analyzing data with FD&L, for example, resolves single-customer issues sooner and eliminates the need for backtracking. The net result is a faster restoration to an outage.

An auxiliary benefit is the opportunity for utilities to provide outage and restoration notifications as a billed service for customers with remote or vacation sites. This can be a value-added benefit for the customer and generate additional revenue for the utility.

The Need for New Solutions

Consumers’ habits, as well as their expectations of utilities with regard to outage restoration, are changing, making traditional strategies for OMS obsolete. Utilities must consider new technologies that can give them the real-time visibility to monitor and manage their distribution networks most effectively and predict and respond to conditions before small problems become major system and service interruptions.

Smart infrastructure solutions that incorporate smart grid sensors as well as advanced software algorithms equip utilities with information they need to operate their networks more efficiently. These tools can better position them for a future that takes advantage of the power provided by advanced technologies, software and data analytics.