Georgia Power recently announced a major milestone in the construction of Vogtle Unit 4--the placement of the CA04 module into the nuclear island. 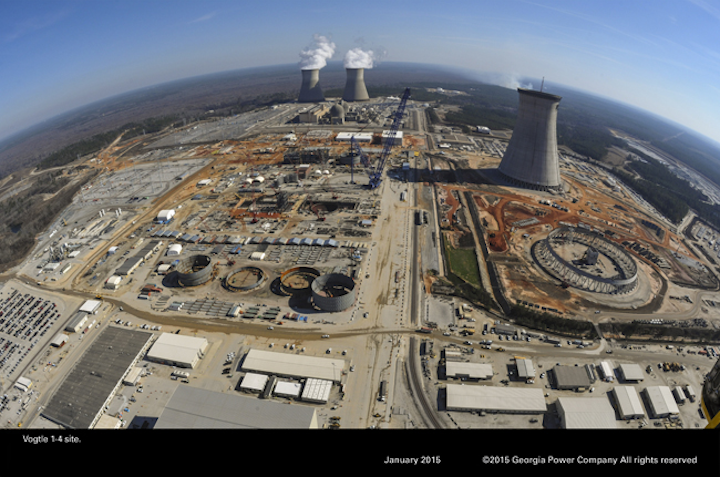 Georgia Power recently announced a major milestone in the construction of Vogtle Unit 4--the placement of the CA04 module into the nuclear island. The CA04 module, also known as the reactor vessel cavity, will house the Unit 4 reactor vessel and is comprised of five sub-modules. The CA04 module weighs approximately 64,000 pounds, or 32 tons, and is 27 feet tall and 21 feet wide. It was assembled onsite in the modular assembly building, moved to the nuclear island as one piece and lifted into place on June 17 by a 560-foot tall heavy lift derrick, one of the largest cranes in the world.

More than 120 workers were involved in the fabrication and placement of the CA04 module. As the largest job-producing project in the state, more than 5,000 workers currently work on the Vogtle expansion site.

The placement of the CA04 module is the latest in a series of recent construction highlights at the site, which include the concrete placement for the Unit 3 Annex Building basemat, the completion of the last of 12 separate water boxes within the Unit 3 Turbine Island and the arrival of multiple pieces of major equipment onsite such as the pressurizer for Unit 4. Georgia Power also recently announced the completion of a variety of transmission upgrades and installations at the site in preparation to connect the new units to Georgia’s power grid.

The expansion at Plant Vogtle is part of Georgia Power's long-term, strategic vision for providing safe, clean, reliable and affordable energy for Georgians well into the future. Once units 3 and 4 join the existing two Vogtle units already in operation, Plant Vogtle is expected to generate more electricity than any U.S. nuclear facility, enough to power more than one million homes and businesses.
Southern Nuclear, a subsidiary of Southern Company, is overseeing construction and will operate the two new 1,100-megawatt AP1000 units for Georgia Power and co-owners Oglethorpe Power Corporation, the Municipal Electric Authority of Georgia and Dalton Utilities. Georgia Power owns 45.7 percent of the new units.