The energy and utilities space is an area ripe for disruption, according to our speakers 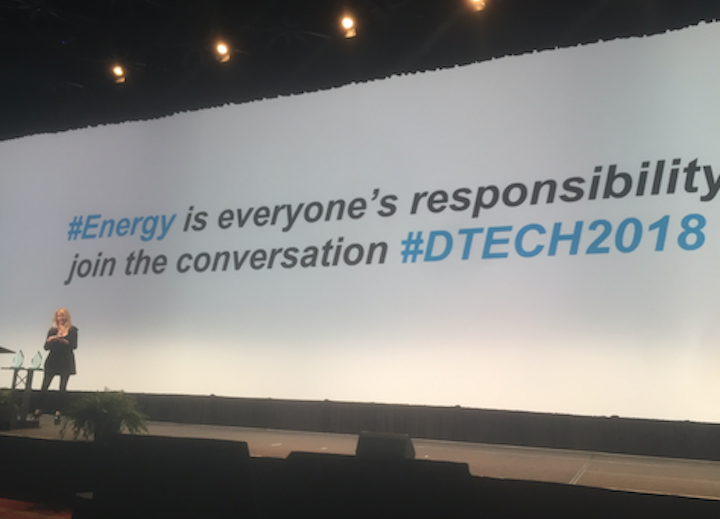 The impact of natural disasters and the sometimes equally disruptive effects of technology were on everybody's mind at the keynote address of DistribuTECH 2018 at the Henry B. Gonzalez Conference Center in San Antonio.

Teresa Hansen, Editor in Chief of POWERGRID International and conference chairwoman for DistribuTECH, set the agenda by observing that a time when natural and manmade disasters are damaging the power grid, utilities must work with technology providers to keep the lights on.

"We hope you will leave here feeling more capable to do that and with a better knowledge of the challenges and opportunities that lie ahead," Hansen said to the assembled delegates in the convention center's packed ballroom.

Paula Gold-Williams, President and CEO of CPS Energy, said her utility sets itself apart by remaining flexible and diversified.

"You have to be diversified in this industry. You can't be locked down on any one thing to survive. We have focused on making sure diversification is our major talent," Gold-Williams said.

In the 1970s, CPS, a municipal utility that owns most of the power generation assets it uses, was 100 percent invested in natural gas. Over time the utility branched out to include nuclear energy, wind and solar power.

CPS also has to maintain its reliability through tornadoes, floods, winds and hurricanes, she said. It has been a year of weather, including a storm that bent a transmission tower over like a horseshoe.

"We've had great response times and restoration times mostly due to technology," she said.

The future for CPS Energy, said said, will include more community solar power projects as well as a 5 MW energy storage system

"What will energy storage look like? There are still a lot of technology options out there. I don't believe it will exclusively be lithium ion (batteries)," she said. "We want to get our skills up in being able to dispatch that energy."

Social media influencer Tamara McCleary introduced herself as being "from the future" and a bit of a futurist as well.

"When we're talking about the future, we will never be able to figure it out if we are going with what we know," McCleary said, adding that your preconceived notions can trip you up if you're not careful.

The energy and utilities space is an area that's ripe for disruption, she said, adding that the best way to harness that disruption is through social media.

"Social media isn't just something kids and teenagers play with," she said. "Social media can deliver those things we've always been trying to do: Getting out message out there in such a way that people are moved to make a decision."

She cautioned anyone in business to avoid making decisions based solely on what they already know.

She encouraged all utilities to be on Twitter, and not just to tell people about outages.

"You want to be able to make yourself relevant. Twitter is a big forum for social discussions and just because you're not involved in that discussion doesn't mean nobody is talking about you," she said. "You need to be seen, you need to be heard and you have to be engaged."

The brands people engage with the best are the ones that manage to humanize themselves, she said, and utilities can do this with a little creativity.

Gil C. Quiniones, President and CEO of the New York Power Authority, said technology is transforming his utility into the first utility to be completely digitized from end to end.

Quiniones said the three forces of decentralization, electrification and digitalization are reshaping the industry.

"Our one-way power flow is completely being changed into bidirectional even multidirectional power flows," he said. "Digitalization is the intelligence layer that makes the other two — decentralization and electrification — come together."

"We will issue a request for proposals for 800 megawatts of offshore wind off the coast of Long Island... By Earth Day we will set mandatory energy efficiency targets," he said. "These are concrete actions we will be taking to reach the destination we have set forth."

A digital utility places the customer at the center of the transformation, he said.

"It has to be end to end. We have to digitize everything inside and out," he said. "A digital utility measures its success, in the end, based on the success of its customers."

Most of the technological transmission happening today is occurring at the edge of the grid, he said.

"DistribuTECH—distribution technology. That is where we can transform this greatest technology that we call the power grid into the integrated energy network of the future for the benefit of all," he said.

Lastly, Dr. Michael E. Webber of Webber Energy Group, noted that all of our modern comforts and the entire global economy are made possible by inventions from the 1800s.

"Even electronic vehicles were invented in 1839. We are due for some innovation, so I hope some of you out there are working on the next thing," Webber said.

A lot of wealth is lost, he said, in ways we don't see or think of. A third of the energy we consume in the US is used just to boil water to spin turbines to make more energy. One half the water we use is to cool power plants.

"We could power entire countries with just the energy we use to heat up water," he said.

In Webber's way of looking at it, energy is water, and water is energy. Any restraint upon one is a restraint on the other. For example, he said, the 2012 droughts in India that led to the country's worst power outages.

Even something as innocuous as tea time can cause outages in the UK, when everyone puts the electric kettle on after their favorite soap opera.

Basic concepts used in the industry, such as baseload power, may need to be rethought.

"Baseload power may be an obsolete and even dangerous term because it may no longer represent what the grid does anymore," he said. "We need to have a supply following mindset rather than a load following mindset."

Electrification is continuing to spread to the transportation sector, he said, adding that his children may be the final generation that ever learns to drive.

"Conservation works at every scale," he said. "It isn't the only answer, but it buys us time so that people like you can develop better solutions."