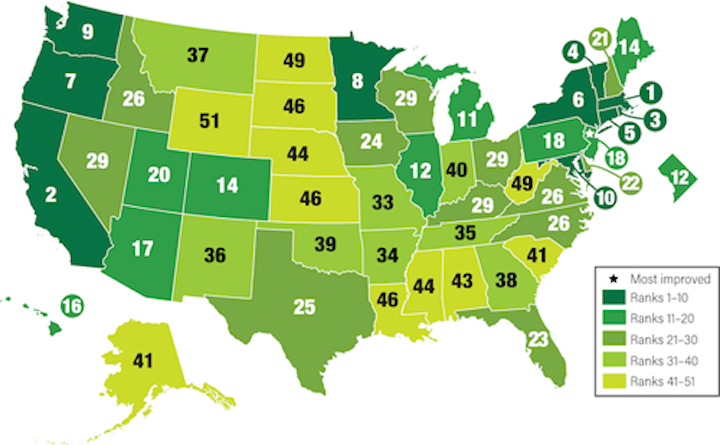 WASHINGTON, DC, OCT 9, 2018 -- As the US government loosens environmental rules, states are investing more in energy efficiency and delivering increased power savings, according to the 2018 State Energy Efficiency Scorecard. This 12th annual report from the American Council for an Energy-Efficient Economy (ACEEE), identifies the leaders (Massachusetts and California), the most-improved states, notably New Jersey, the states that lost ground such as Iowa, and those lagging behind, including North Dakota, West Virginia, and Wyoming.

The scorecard offers mostly good news about energy efficiency -- the nation's third-largest electricity resource. In response to federal efforts to freeze US vehicle and appliance standards, quite a few states worked to retain their own standards and to promote electric vehicles as well as zero-energy buildings. While some, like Iowa and Connecticut, saw legislative attacks within their states, others -- including Virginia, New York, New Jersey, Colorado, and Arkansas -- unveiled plans to boost investments in efficiency and clean energy, often driven by concerns about climate change.

States ramped up efforts to promote zero-emission vehicles (ZEV), mostly electric, as the federal government sought to freeze fuel economy standards for cars and SUVs. California joined with eight other states in rolling out an updated ZEV plan, which incentivizes consumers to buy ZEVs. Missouri moved to incentivize the rollout of more EV charging stations, and Oregon to require new buildings be ready to charge EVs.