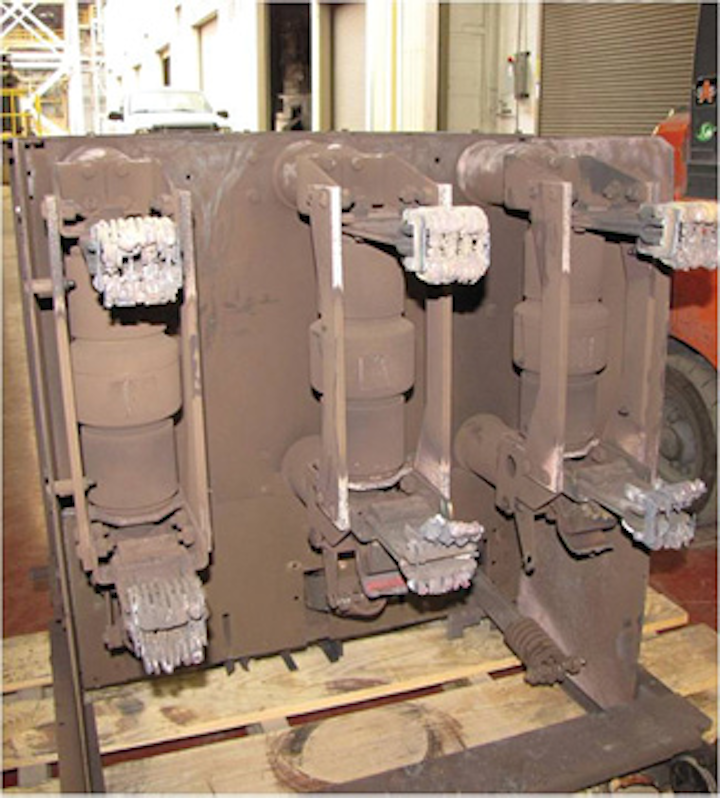 On May 23, 2009, a power plant in the Midwest experienced a severe arc-flash incident. The incident occurred while racking in a closed Siemens 15-kV GMI breaker with a faulty interlock. When the (closed) breaker contacted the bus, a large arc flash occurred. The breaker was being racked in remotely (wireless); the operators were in another room and there were no injuries of any kind. The RRS-1 was used after the arc-flash incident to remove the damaged GMI from the cell for evaluation. Plant personnel who were present are convinced that lives were saved that day.

Like any energy source, an electrical circuit is a ticking bomb. It’s simply waiting for the right conditions to blow. A twisted pole, faulty interlock, and enough energy will turn an electrical firecracker into a mortal lightning strike.

Electricians, maintenance personnel, and inspectors had better know the causes of an arc flash, the difference between arc flash and arc blast, and how to mitigate the dangers from both conditions if they want to succeed at their job and enjoy their retirement.

In 1982, IEEE Life Fellow Ralph Lee wrote the seminal arc-flash paper, The Other Electrical Hazard: Electric Arc Blast Burns.1 In it, Lee tells us that arc flashes are caused by poor electrical contacts or insulation between an energized piece of metal and some other conductor. Unlike a plasma, which solely uses ionized oxygen or trace gas molecules in the air to conduct electricity between two points, an arc flash is carried by the vaporized (and ionized) metal molecules. The metal is vaporized because the available fault current is high enough to create an electric arc with a temperature of 35,000°F, or approximately four times the temperature of the sun’s surface. That is hot enough to kill any unprotected person standing within five feet and send a person standing 10 feet away to the hospital with third-degree burns.

That’s bad news. But it gets worse.

The heat from the arc flash causes atmospheric gases to expand at a furious rate, resulting in a peak pressure of up to 2,100 psi at the source of the arc flash.2 According to bomb studies conducted by the U.S. Department of Defense, 10 psi is sufficient to turn a person’s insides into various types of fatal goo.3 So if the flash doesn’t kill you, there is a chance the arc blast will if you’re standing too close, regardless of whether you’re wearing PPE equipment rated to handle the arc-flash temperatures.

In both cases, there is only one sure way to survive: Don’t be around when the arc flash/blast goes off. And while that may sound sarcastic, the electrical industry has a number of solutions designed to both reduce the chances of arc flashes/blasts and protect your technicians when accidents happen. 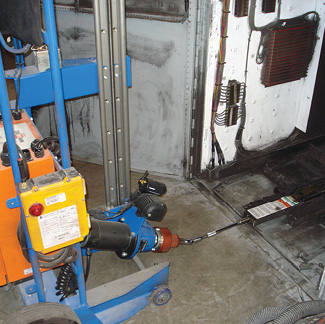 PPE and Arc Flash Calculations - Whom Do You Trust?

Obviously, the best line of defense against arc flash and arc blasts is to only work on de-energized equipment. Unfortunately, that’s not always possible.

For occasions when the power has to stay on, the National Fire Protection Association’s (NFPA) 70E, also known as the National Electrical Code (NEC), Tables 130.7(C)(9-11) define hazard risk categories (HRCs) for various classes of equipment, as well as what level of PPE employers need to provide to employees based on the minimum arc thermal performance value (ATPV). A common mistake is to determine the HRC and therefore required PPE level based solely on the class of equipment instead of the actual 70E standard requirements, which are based on available fault current and clearing times for the overcurrent protection device (OCPD).

However, even this approach assumes that the fuse or circuit breaker will actually perform to the OEM specification. For example, fuses may not react quickly to a secondary fault and are only effective if the fault current falls within the prescribed range.

Circuit breakers aren’t perfect, either. An in-house study conducted by our technicians based on more than 2,000 “as found” circuit breaker field tests revealed that more than 30 percent of low- and medium-voltage breakers installed for 24 months or more did not meet OEM time current curves (TCCs). After proper testing and maintenance, that percentage fell to 12 percent.

Today, electrical testing companies offer a number of ways to quantify TCC, including a recent iPhone app that uses the phone’s internal accelerometer to capture vibration signatures over time value in all three spatial dimensions. When used with remote actuators, this data can provide important insight into the electrical and mechanical health of OCPD devices.

A failed OCPD or even a slow breaker will result in higher incident energies than your technician’s PPE protection when the arc-flash calculation is based solely on OEM specifications. NFPA’s 70E Article 205.3 requires that all electrical equipment be maintained in association with the OEM instructions or industry standards. NETA’s maintenance frequency MTS table based on equipment class and an environmental condition is a good place to start when developing your preventive maintenance planning schedule. Clearly, good maintenance is a first line of protection against arc flash/blasts. 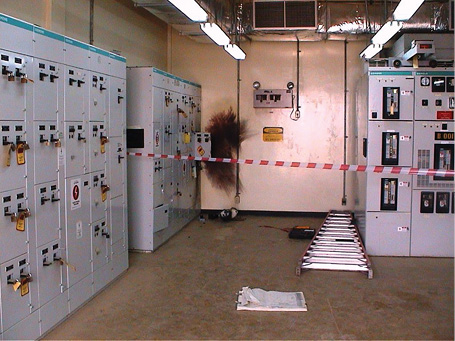 March 4, 2009, at the Jubail Project in Riyadh, Saudi Arabia. Three workers were removing a 480-V, molded-case circuit breaker from the bucket of an energized motor-control center (MCC) when an electrical arc flash occurred, severely injuring them. All three sustained first- and second-degree burns and were hospitalized following the accident. Myth: Switchgear is designed with arc-flash containment in mind.

Save Me Switchgear, Save Me

There’s a recurring myth that switchgear is arc-flash resistant. And while it is unquestionably safer to operate or rack a breaker or motor control with the door closed, older switchgear and panel boards were not made with built-in remote actuators and extraction/racking capabilities.

Realizing the gap between fact and fiction, OEMs have started to develop switchgear cubicles with integrated remote actuation and racking/extraction features. For a premium, this switchgear allows your technicians to actuate the OCPD or other device while it is still behind the metal enclosure. In fact, some manufacturers will say that the safest racking takes place behind the closed door of the switchgear. I disagree. I say the safest racking operation takes place while I’m in another room and the OCPD is behind its door while I’m behind mine.

Let’s not forget about the dangers of pressure waves from arc blasts. An explosion that creates a 10-psi pressure wave will also generate maximum wind speeds of up to 294 mph. Double that to 20 psi, and maximum wind speeds are more than 500 mph, which will “severely damage or demolish” a concrete building. But either way, I’d still prefer to have the concrete building between me and the arc blast.

Arc-flash-resistant switchgear also strives to direct the arc flash up and away from the technician and you can easily search on the internet for each switchgear manufacturer’s latest equipment design.

While arc-flash-resistant switchgear that complies with IEEE C37.20.7 “Guide for Testing Medium Voltage Metal-Enclosed Switchgear for Internal Arcing Faults” with remote actuation and racking/extraction is a move in the right direction, it can be prohibitively expensive to replace all your aging switchgear with new enclosures and gear.

In response, the industry offers a number of portable remote actuation/extraction/racking systems that can work on virtually any OCPD or motor-control center and enclosure. Rather than having an embedded unit for each cubicle, these systems come with a portable design and power supply. The best examples of remote racking/actuation work with horizontal or vertical racking systems, use magnetic latching that does not require any modification to existing equipment, and accommodate a variety of equipment makes and models. In some cases, the technician can stand up to 500 feet away from the gear in question, well outside the arc-flash and arc-blast danger boundaries, which is defined as the distance at which incident energy drops below 1.2 cal/cm2.

These portable systems can also provide preventive maintenance data on the force required to rack a unit. For example, during a recent service call, eight ITE HV 1,200-amp breakers had all undergone recent maintenance in a 50-year-old power plant.

While the remote-racking device could not identify the specific problem, it did give maintenance the information they needed to check the cubicle for a dry/non-lubricated racking screw, problems stemming from a settling facility foundation in a 50-year-old power station, a bent racking mechanism, a worn racking mechanism, bent finger clusters, lacquered grease on the stabs and finger clusters, and melted bus, among others. A qualified maintenance person identified the real cause of the increased friction and corrected the problem before a catastrophic event could occur.

Protecting yourself and your employees from arc-flash and arc-blast dangers isn’t an option – it’s a necessity per OSHA and NEC requirements. It starts with an accurate arc-flash calculation based on real field tests, which will pay double dividends when you use that data as part of a preventive maintenance program.

But realize that whenever a piece of electrical equipment with sufficient fault current is operated, there is a danger. And PPE will not always protect your workers. While PPE is useful, it is also expensive, impossible to test its actual temperature resistance without damaging the equipment, and a misery for your technicians who have to wear it. Consider newer solutions for your technicians who perform testing, actuation, and extraction/racking operations from well outside the danger zone. Only then can you be sure that not only is your equipment in good working order but you’ve done all you can to protect both your employees and your bottom line. UP

The Author: Greg Davis is the customer service and international sales manager for CBS ArcSafe. To learn more, visit CBSArcSafe.com.