Nearly a third of workplace injuries are equipment-related. This includes mechanical errors, PPE failure, struck-bys, or pinches. That means if you reduce equipment-related injuries by 80 percent, you will cut your overall injury rates by about 24percent. 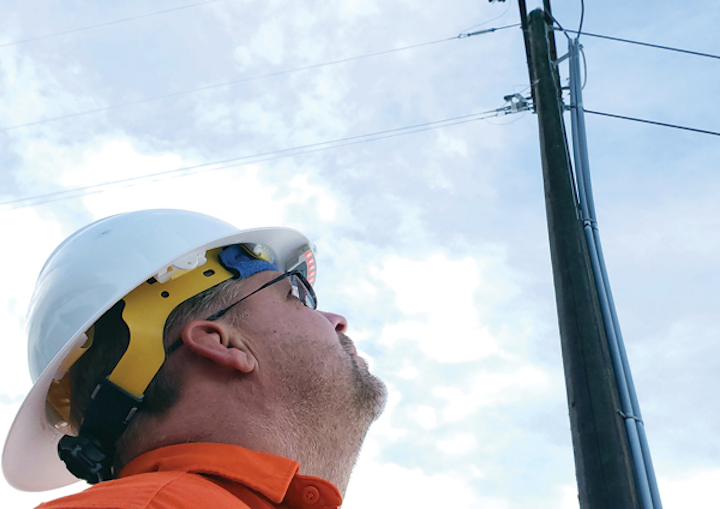 Safeguard Compass pushes the needle to save lives

Experienced electrical workers, telecom professionals, construction workers, EMS first-responders, agricultural workers, and those within industrial settings are just a few of the occupations impacted by electrical contacts. Like brooding vipers, dangerous voltages and currents lurk throughout the modern workplace. Every year, hundreds are struck by them and experience the searing heat and intense pain of electrical current as it flows through their bodies. Fatalities, horrific burns, and damaged lives are the result.

Although many survive their initial contact, injuries from electrical contacts can take months to develop. Often, electrical burns require many surgeries, especially when the cooked internal tissues continue to slowly die for months after the actual contact. Some electrical burn victims describe the pain experienced during the healing process as being so bad they had wish for death instead. Without the ability to see or hear electricity, a momentary lapse or a simple unexpected condition is all that’s necessary for someone to be hit by electrical contact.

Electrical contacts at jobsites have been unacceptably high for decades. In fact, electrocution is one of OSHA’s Big Four — along with falls, struck-by, and caught in between — leading causes of workplace fatalities. Most everyone who works around electricity knows someone who has been personally impacted by an electrical contact. Comprehensive safety regulations and extensive training programs have helped reduce the numbers of workers struck by electrocutions, but the figures are still unacceptably high. 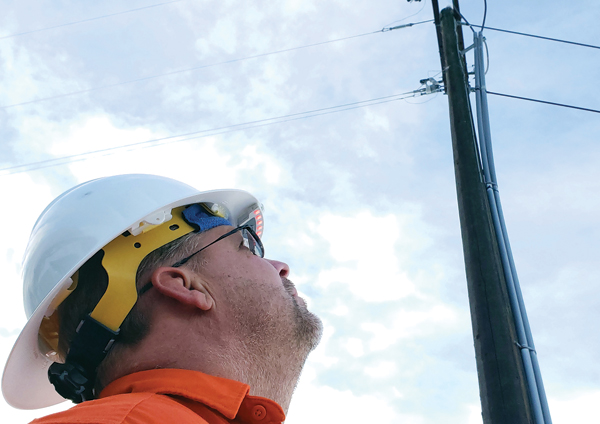 The Safeguard Compass utilizes ground-breaking technology to read the electrical field and give the wearer a real-time proximity alert.

Safeguard Equipment’s three founders met as college students at the University of Idaho. They discovered they had all grown up in households where family members worked in the electrical utility industry and had heard stories of horrific electrical accidents. Their extensive research into electrical safety technologies and designs revealed that a new product was needed to give electrical workers the ability to perceive electrical hazards before it was too late. It ultimately led to the design and development of a wearable voltage detector designed to give the wearer an ability to see and hear electricity.

The Safeguard Compass design utilizes a lithium-ion battery to power its advanced sensors under the wearer’s hard hat. As the sensors operate, an integrated circuit executes software that makes the sensors listen and watch for two tell-tale signs of an impending electrical hazard. Once it senses an electrical field, it issues an immediate alert and then quickly analyzes the environment to determine directionality of the source of the danger. It makes these assessments in fractions of a second. As the wearer gets closer to the source of voltage, the additional on-board LEDs light up and the audible alarm begins to sound with increasing frequency. The Compass’s electrical “ears” help it point the way to the source of voltage by sweeping the LEDs in that direction.

This is just one of Safeguard’s many departures from previous versions of personal voltage detector (PVD) devices. The directionality and intelligence of the unit greatly surpasses older, bulkier “dumb” devices that simply squawk at the presence of an electrical field.

Centuries ago, it was theorized that current flowing through an electrical conductor created a circular magnetic field around that same conductor. In 1820, a physicist by the name of Hans Christian Oersted, was participating in an electrical seminar. As a switch was closed as part of the demonstration, he noticed the needle of a directional compass (placed next to the wire) deflected as the current was turned on. The magnetic field created by a current flow was observed, evidenced by the directional compass. Using this same magnetic field and current flow relationship, Safeguard Compass created its new type of electric safety vision. 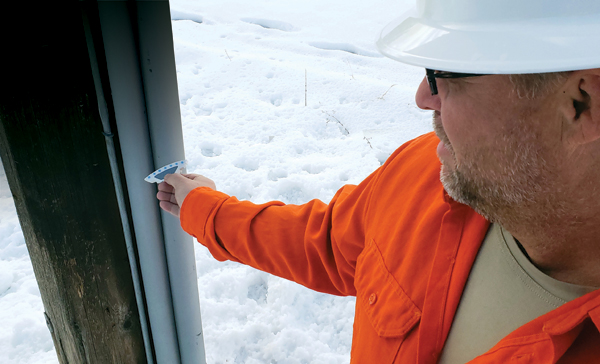 By incorporating magnetic field detectors, the Safeguard Compass is capable of detecting current-carrying conductors within conduits, duct banks, and buried within the soil.

With highly-advanced magnetic field sensors, the unit not only listens to the electric field environment, it also listens and watches for magnetic fields that are produced by current. This is an important breakthrough that forges a new direction within the realm of wearable electrical detection.

The magnetic field-sensing capability gives the Safeguard Compass a way to detect buried conductors that carry current. Since magnetic fields are difficult to shield, the location of the Compass on the brim of a hard hat helps it to overcome a dangerous limitation of other PVDs worn on a lanyard or the front of a body. A worker’s body can shield the electric field from the unit. Simply turning around can easily limit the detection capabilities of traditional PVDs, giving a worker the illusion of safety but not offering full protection. Safeguard’s Compass maintains consistent electrical field awareness in a 360-degree radius around the user.

Safeguard’s Compass provides a number of different settings, allowing users to calibrate their device to provide the appropriate level of detection for the intensity of the electrical hazards or situations they are exposed to. After plugging the device into the charger and charging cable, a simple one-button operation allows the wearer to change settings for both voltage and current sensitivities.

With continued adherence to safety regulations, participation in effective training programs, and use of the Compass, we can now help stem the annual tide of electrical contact accidents. UP

The Author: Brady Hansen is manager of safety and product development at Safeguard Equipment, a company founded upon the core idea of making the lives of our loved ones safer when working around power systems. Learn more at www.safeguardequipment.com.