The blaze has burned more than 150 square miles of a heavily forested region of the Sierra Nevada that is home to numerous hydroelectric plants and is crisscrossed with power lines, water pipes and wooden flumes 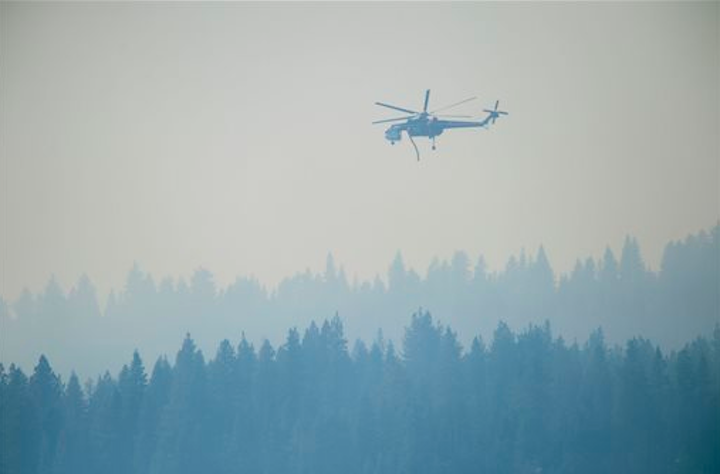 SACRAMENTO, Calif. (AP) — Nearly an inch of rain, with more wet weather forecast for the weekend, has helped firefighters gain the upper hand on a massive wildfire burning in the mountains east of Sacramento, officials said Friday.

The blaze has burned more than 150 square miles of a heavily forested region of the Sierra Nevada that is home to numerous hydroelectric plants and is crisscrossed with power lines, water pipes and wooden flumes.

It destroyed a dozen homes near the town of Pollock Pines in El Dorado County and threatened several reservoirs that supply water and electricity to portions of Northern California, but most of the utility infrastructure appears to have been spared. A popular lake basin that draws hikers, campers and anglers from throughout Northern California was threatened but escaped largely untouched. 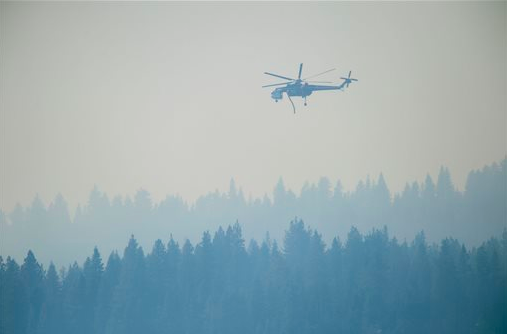 The Sacramento Municipal Utility District estimates the fire caused $2.5 million in damage to one power line and the roof of a generator station.

The fire came within a mile of the El Dorado Irrigation District's power house along the South Fork of the American River, and within 8 feet of a pipe that feeds mountain water to the hydroelectric plant. Surveillance cameras showed flames burning near other buildings and wooden flumes without doing harm.

The King Fire that authorities say was started Sept. 13 by an arsonist was 68 percent contained Friday.

The region saw a 20-degree drop in temperatures and a doubling of humidity levels in 24 hours, National Weather Service meteorologist Brooke Bingaman said. Up to another half-inch of rain was predicted for the fire zone through Friday, with some snow falling at the highest elevations east of the fire. Showers, higher humidity and lower temperatures were expected through Saturday before a warming trend next week.

More than 1,000 of the 8,000 firefighters who had been fighting the blaze, some for two straight weeks, were expected to be released from duty, said Dana Walsh, a fire information spokeswoman for the Eldorado National Forest.

The storm led the Klamath, Mendocino, Six Rivers and Shasta-Trinity national forests in the northern and coastal regions to lift seasonal burn restrictions on Friday.

As some areas of the fire cooled, authorities were able to begin assessing the damage.

The fire burned intensely through more than 5 miles of the canyon carved by the Rubicon River, which is designated a wild trout river. Walsh said damage to the river and its fish will depend on whether the fire leads to erosion and mudslides this winter.

The fire also passed through the Leonardi Falls Botanical Interest Area, known for its unique and sensitive plants. Walsh did not know how much damage was done to the 215-acre site northeast of Stumpy Meadows Reservoir.

It burned around three sides of the reservoir itself, which is the sole water supply for the 2,400 residents of Georgetown, 15 miles downstream. But the flames missed a boat launch, recreation area and the historic Gold Rush town's water distribution system.

Now the concern is the silt, mud and ash that will wash into the reservoir with the winter's rain and snow. Authorities plan to soon begin laying straw and planting grass and trees through the burned area.

It burned through several campgrounds around the Stumpy Meadows and Hell Hole reservoirs but did minimal damage, Walsh said.