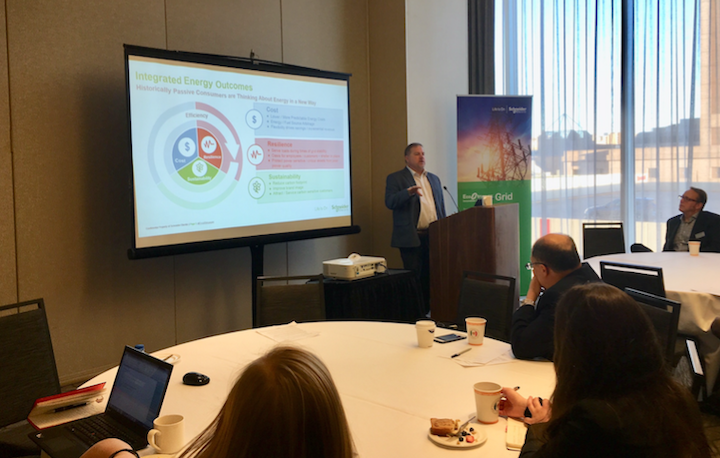 SAN ANTONIO — Schneider Electric announced major collaborations on the microgrid front Wednesday, including a $4.5 million municipal project in Connecticut and a partnership with a new energy-as-a-service company backed by a $500 million capital commitment from the Carlyle Group.

The financial world is seeing the potential in behind-the-meter energy solutions worldwide and wants in, Mark Feasel, vice president of Schneider Electric’s smart grid and microgrid segment, said during a briefing at DistribuTECH 2018.

“There’s more bankers walking around here at DistribuTECH than any year in the past,” he said.

The most immediate news announced by the Boston-based firm was a $4.5 million microgrid project with the city of Milford, Conn. It will team gas-fired combined heat and power generation with energy storage and could be solar-ready for future additions.

The microgrid will power five critical facilities in Milford, including a senior center, middle school, city hall, government center and apartments for the elderly. Construction has begun and should be completed by the first quarter of 2019, Feasel noted.

City leaders were concerned after seeing what happened with Irma and voted to approve a project which will provide protection against grid outages, he added. The project is funded partially by a grant from the Connecticut Department of Energy and Environmental Protection, with Milford funding the generator and battery energy storage system. Schneider provides the design, electrical equipment and grid management expertise.

“More and more, we’re seeing the negative impacts of 500-year storms on entire regions,” Feasel said. “The unprecedented nature of these storms is causing municipalities to come to grips with the need to offer resilient power and a shelter and microgrids that operate independently in the event of a grid outage. . . The microgrid will offer Milford residents peace of mind.”

Many of Schneider’s previous microgrid projects combined solar power with storage and a backup generator. Milford chose the gas-fired option because of its low-cost and lower emissions profile.

“It’s greener than what they have today,” Feasel noted. The generator will need to run 24 hours a day. He also pointed out that about 40 percent of microgrids have a gas-fired generation component, about the same percentage as solar.

The company’s microgrid profile took a potentially even bigger leap by detailing its partnership with Dynamic Energy Networks. The startup, which is a portfolio company of investment giant Carlyle, looks to jump up into the microgrid space soon, buying and operating assets with power sold back to the customer on long-term deals.

A graphic delivered during the presentation indicated that the U.S. microgrid market is expected to exceed 3.7 GW by 2020. Dynamic Energy Networks is set up to move soon as various projects, using Schneider as a technical partner well-versed in microgrid installation and control technologies.

“We see this as a fast-growth path and it needs a lot of capital,” said Karen Morgan, a longtime renewables executive who is CEO of Dynamic Energy Networks. “We feel we can get into the market quickly.”

The company certainly will look into existing projects to acquire, she added. However, Schneider’s front-line engagement with microgrid construction can move that into fledgling projects.

Taking the operational financial burden off of municipal and commercial and industrial (C&I) customers is a key driver for future transactions, Morgan pointed out. The business plan of buying the power at long-term predictable costs should be more attractive to top leaders who want cleaner energy and resiliency against outages, Morgan predicted.

“This is a C-suite solution,” she said. “Schneider has been in this a long time and is a leader. I think we’re hitting a tipping point.”