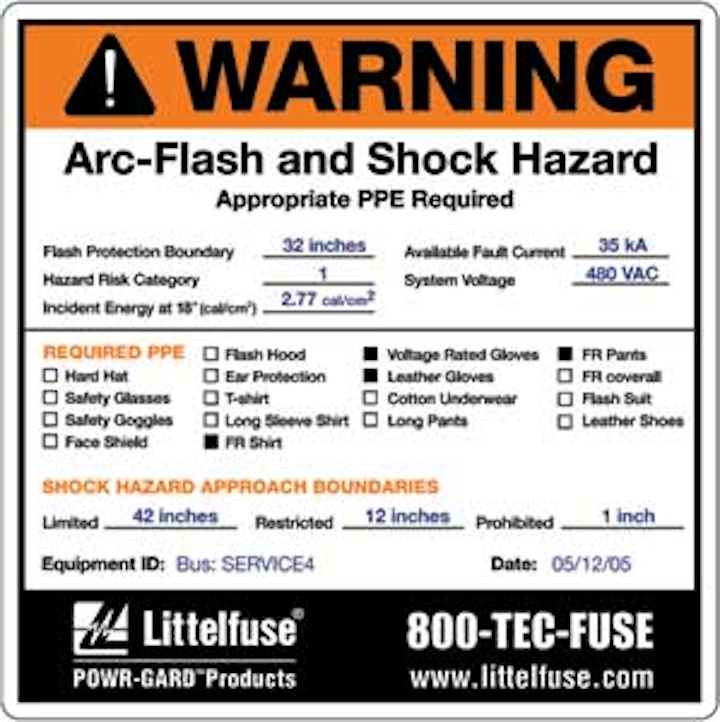 About Arc Flash
An arc flash is an explosion caused by a sudden electric discharge that travels through the air between energized conductors or from an energized conductor to ground. It creates a ball of plasma (hot ionized gas consisting of air and vaporized metal) with temperatures that may be hotter than the surface of the sun. The arc flash also creates a blast wave that can crush a worker's chest or throw him across a room. It ejects bits of solid and molten material at speeds comparable to a pistol bullet.

Besides the injurious and often lethal effects on workers, an arc flash incident can be costly in other ways. Damaged equipment is expensive to replace, and an unplanned outage has associated expenses. Medical costs, lawsuits and higher insurance costs are also possibilities.

In the U.S., NFPA standards call for an arc flash hazard assessment to be performed, and each electrical cabinet is required by the National Electrical Code (NEC) to bear a label that gives information on safe approach distance and level of worker personal protective equipment (PPE) required. According to a 2013 survey of plant managers by Littelfuse, 67 percent of industrial facilities have conducted arc flash assessments and 77 percent have Hazard Risk Categories (HRC) 3 or higher. High HRC categories expose workers to more risk and require additional PPE and safety precautions. Equipment with HRC higher than 4 must be de-energized before servicing. Even though the NEC is moving away from the HRC terminology, PPE requirements and other safety precautions remain in place based on the equipment's amount of incident energy.

Utilities' Challenge
Many utilities are at special risk of arc flash because of their use of coal. According to the IEA Clean Coal Centre, more than 2,300 coal-fired power stations exist worldwide. One drawback to coal use is that it produces a fine, conductive dust that tends to settle on any surface it reaches. When this happens inside an electrical panel it can create a path for electricity to track over an insulator and initiate an arc flash.

Aware of the challenges, managers at Kansas City Power & Light (KCP&L) took a big step forward toward arc flash hazard reduction. KCP&L services more than 800,000 customers in 47 northwestern Missouri and eastern Kansas counties. Most of the company's 15 generating facilities are coal-fired. KCP&L managers were concerned about improving safety and reducing the risk of arc flash and had established a goal to have no equipment rated above HRC 2 and has been in search of solutions.

Protecting Against Arc Flash
An arc flash can occur on any circuit with sufficient voltage, which is usually defined as 480 V or more. The best way to limit the damage caused by an arc flash is to shut off the power before an arc flash fully develops. Circuit breakers cannot do this. Conventional overcurrent devices provide little or no protection against arc flash because an arc capable of causing considerable damage might not draw enough current to cause an instantaneous trip. While it takes 20 times an overcurrent device's normal rating to cause a circuit breaker to open in 10 milliseconds or fewer, an arc, especially when it first starts, typically draws much less. This might not cause the overcurrent device to open at all, or at least it could take several seconds to do so. Consider that it is possible to weld one-eighth inch steel with an arc welder delivering just 125 amps. In addition, most overcurrent protective devices have built-in time delays to prevent nuisance tripping due to normal motor inrush currents and momentary overloads.

One way to reduce arc flash risk is to convert to a high-resistance-grounded electrical system. This limits phase-to-ground fault currents to just a few amps, which will not be enough to sustain an arc flash, but will not provide protection against an arc between phases, so the arc flash danger still exists. Phase-to-phase faults are likely to be caused by worker error, such as a dropped tool, and therefore they might be more dangerous for employees.

Another means of protection is to purchase arc-proof or arc-flash resistant switchgear. The problem is that the switchgear is relatively expensive and difficult to install, except at the time a facility is constructed. KCP&L needed a solution that could be easily retrofitted into its existing switchgear.

Arc Flash Relays
One device that stops an arc flash in its tracks is an arc flash relay. It detects the bright light produced as an arc begins in a panel or cabinet and instantly sends a relay-trip signal to the breaker feeding the panel. It uses a set of light sensors placed inside cabinets that are to be protected; when a sensor detects a flash of bright light it triggers the arc flash relay, which then signals the breaker. To prevent false tripping caused by direct sunlight, nearby welding or flash photography, some arc flash relays use current transformers positioned on the feed lines to the panel. If a light sensor detects a bright light but there is no corresponding increase in current, then the arc flash relay can be set to ignore it.

Upon seeing a demonstration of an arc flash relay, KCP&L's plant engineers and their electrical crews understood its potential for worker safety and hazard reduction. KCP&L set up a trial at the La Cygne Kansas Unit 2 facility, which was undergoing a planned outage. The team selected a PGR-8800 arc flash relay made by Littelfuse. Light sensors were installed inside the electrical panels that contain the plant's primary power distribution, off the secondary side of the primary transformers.

Arc Flash Relays and PPE
KCP&L workers are now exposed to less risk when they work near these panels. In addition, they can approach the panels wearing normal, moderate personal protective equipment instead of the bulky and uncomfortable "moon suits" needed for high risk areas.

Two weeks after the initial trial order, the utility ordered additional arc flash relays for the rest of its equipment and plans to install them in the KP&L's other coal-fired plants as they rotate through planned outages.

By reducing the duration—and total incident energy—of an arc flash, an arc flash relay can greatly reduce the hazard associated with an electrical panel or cabinet. An engineering firm should verify and determine the exact HRC reduction.

About the author:
Robert Zweifel is a sales manager and sales engineer for Littelfuse, a global leader in circuit protection. He has 25 years of experience in the electrical industry with various companies, most notably ABB, Entrelec, Landis & Gyr and Black & Veatch. He received his B.S. in Electrical Engineering from the University of Missouri.

For more information about Littelfuse or other products, click here to go to Utility Products’ Buyers Guide.