With hillsides that can have slopes of 25, 30, and even 45 degrees or steeper, Ohio DOT repairs need to be completed using drill rigs with enough reach to be able to reach over the barrier and drill the hole while remaining stable. 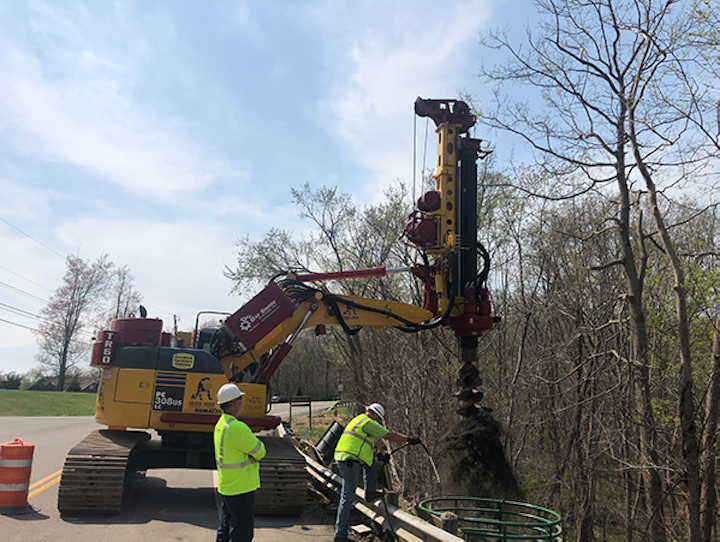 Dennison Bridge, Inc. has been completing highway and slide repair work for the Ohio Department of Transportation since the 1950’s. Slope stabilization is a niche specialty but with more than 43,000 lane miles of highways representing the fourth-largest portion of the Interstate system in the nation and a infrastructure report card of D+, Dennison Bridge has the resources that can deliver success on most ODOT projects. 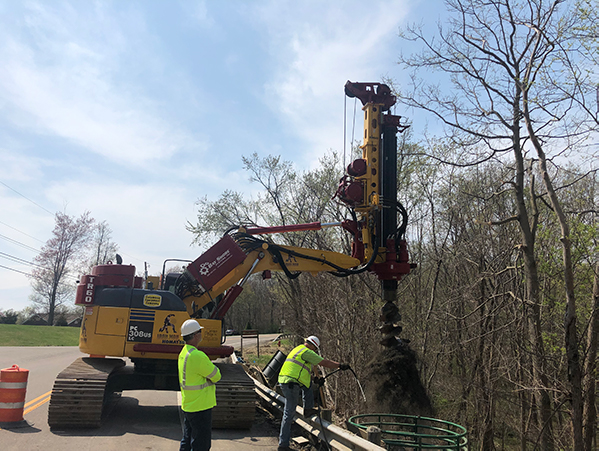 The slope repair project outside the City of Alexandria, just up from the Ohio River and State Highway 7, was slated to start last Fall but at the last minute a water main was discovered that had to be relocated before the work could start. This delayed the project until March 2019.

The project called for a total of 221 drilled shafts in two phases – 25 in one location and 196 in the other. The soil conditions resulted in clay on top but rock underneath, so they needed a more powerful and efficient drill rig than the dangle drill they’d been using. Dennison Bridge selected Bay Shore’s TR60. The dangle drill only has a one piece kelly bar and no crowd pressure system or side tilt capabilities. It also only weighs a fraction of what the TR60 weighs and that extra weight helps the auger battle whatever is in the ground. 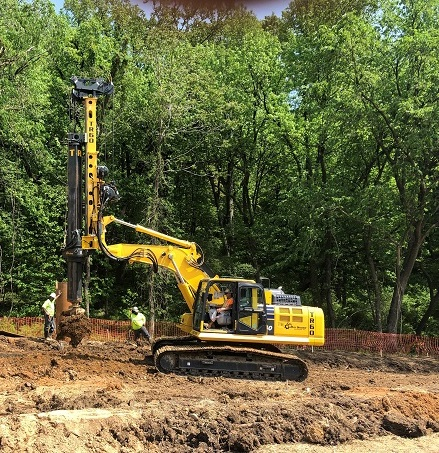 With the slope continually sliding, it was imperative the reinforced concrete pilings be installed as quickly as possible. The first 25 holes were done with the dangle drill and took two weeks, averaging two holes per day. The second phase with 196 holes and using the TR60, completed six holes per day, and will be finished in six weeks.

The 24” diameter holes are drilled 30’ deep. After drilling the shaft, a 26’ I-beam is inserted to provide slope stability before cement is poured in. After 20-30 minutes, the cement has dried, and a form is placed over the hole so additional cement can be poured to create an above surface column of approximately two feet. 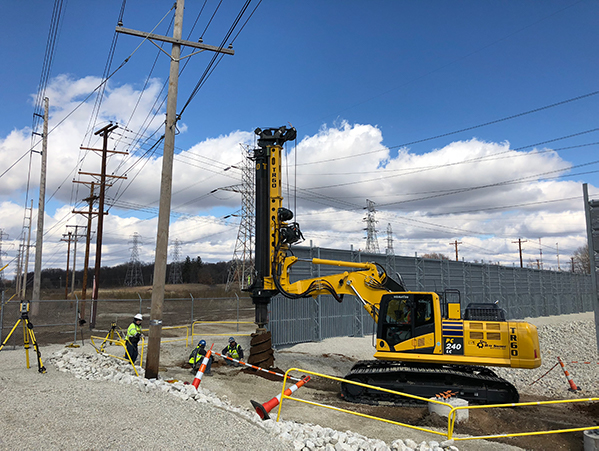 One of the largest savings with this project between the dangle drill and the TR60 is the cost of cement. With the dangle drill, 12 yards of cement were needed to fill two holes. Because the TR60 is able to drill a smoother and straighter hole, 10 yards of cement are needed to fill three holes. At a cost of $137/yard, this represents a savings to Dennison Bridge of $2,192 for every six holes drilled.

The most challenging aspect of this project and all of Dennison Bridge’s projects, are the sloping conditions that the machinery and employees must operate on. The hillsides can have slopes of 25, 30 45 degrees or steeper. The employees are working on the slope where footing is difficult. The drill rig needs enough reach to be able to reach over the barrier, drill the hole, while remaining stable. 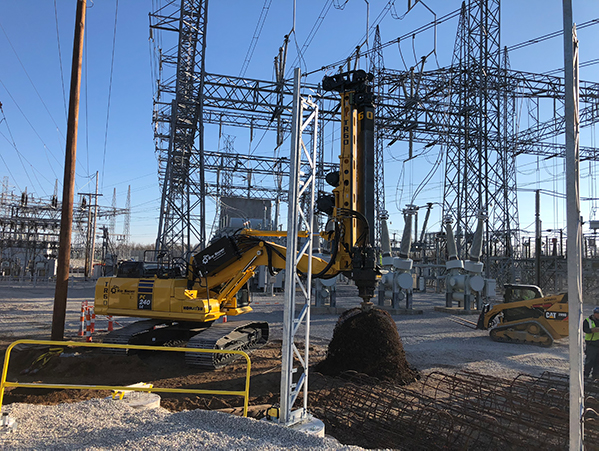 Matt Nardi, president of Dennison Bridge, said, “This new drill rig is perfect for this application. Its just what we needed. We are very happy we purchased it.”

During 2019, ODOT will invest more than $2 billion in 1,000 projects, 90 percent of which are to preserve existing roads and bridges.