Requiring low amounts of energy, TDRs are a safe tool for operators in a variety of applications 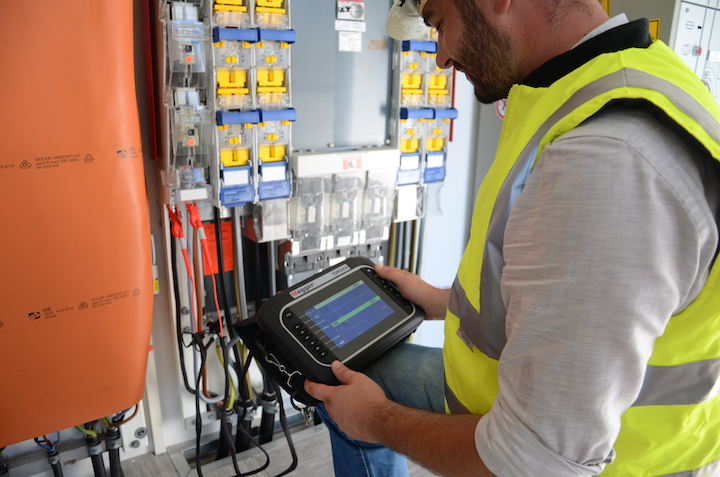 TDRs are safe, handheld instruments, easy to use from any convenient point of access to the electrical system. All photos courtesy of Megger 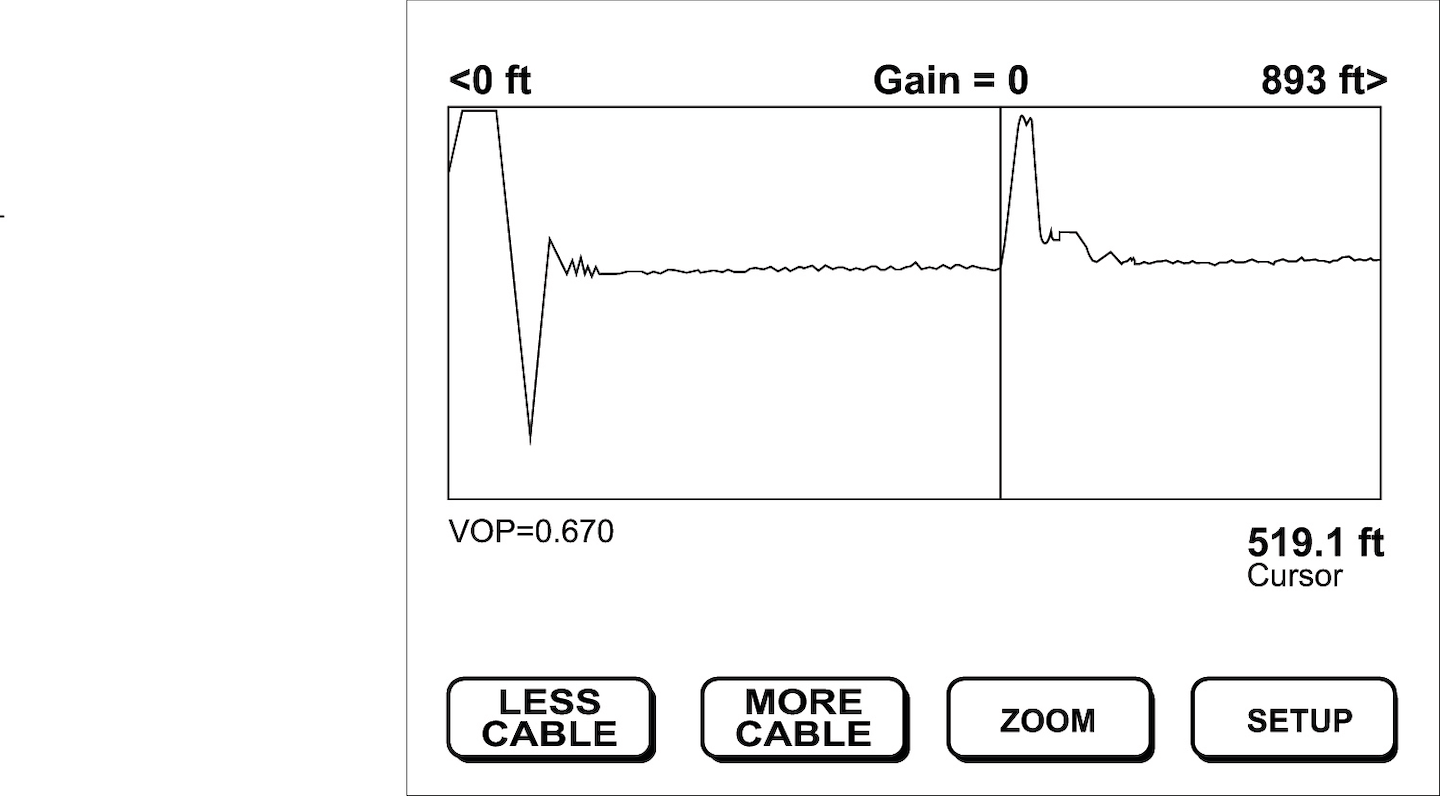 Figure 1. Trace of an openAfter firing a quick pulse of energy down a cable, a time domain reflectometer (TDR) will recognize any changes in impedance between the two parallel conductors of a twisted pair and coax cable and send the reflections back. The results of this measurement are graphed by the instrument and a map of the cable is populated. This illustrates any discrepancies of impedance between the two wires. The distinctive trace on the display allows a lineman or electrician to identify and zero in on the distance to a fault safely. Generally, most faults are found at terminations, cable joints, or other locations where the route to the cable has been disrupted. 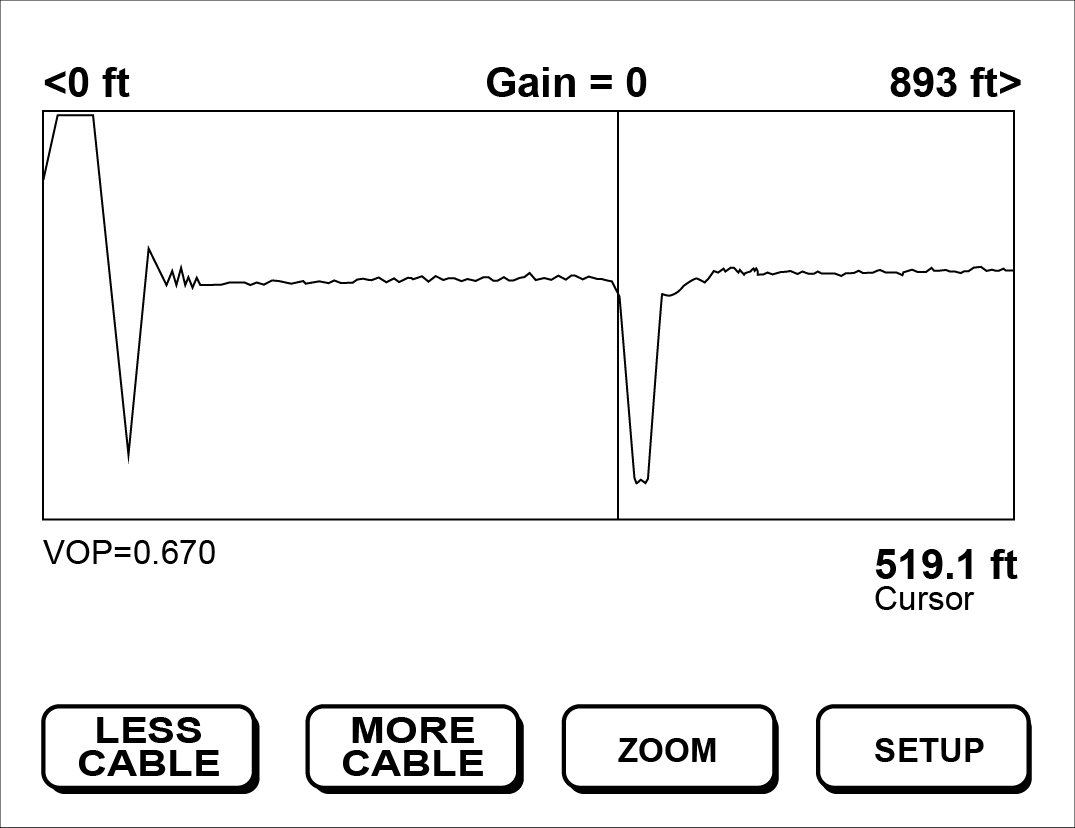 Figure 2. Trace of a shortAdditionally, operating a handheld TDR is not equivalent to thumping a cable. The process of thumping is potentially dangerous and requires additional safety measures. For the telecommunications industry, thumping is unnecessary; TDRs are used exclusively and can always be relied on to identify faults. Whereas for the power industry, TDRs often miss high-resistance faults, generally over 100Ω, so it is sometimes necessary to use thumping as a supplementary technique.

Requiring low amounts of energy, TDRs are a safe tool for operators in a variety of applications. In difficult to reach locations, a TDR is a particularly valuable tool. After the Deepwater Horizon oil spill of 2010, scientists enlisted the help of robots to aid the clean-up efforts. These engineered submarines were attached to lengthy cables off the oil platforms, sometimes extending a mile deep into the ocean. When cable troubles arose, technicians used TDRs to identify cable faults and shorts from water ingress, despite the cable extending thousands of feet into the ocean.

For telephone and CATV applications, water can seep through the conductors of a twisted pair cable at multiple ingress points along the insulation. In these situations, testing the cable from both ends and recording the distance to fault will give the lineman an accurate illustration of the severity of the water issue or confirm that the initially spotted anomaly is correct. For example, if the cable under test is 500 feet long and it reads 100 feet from one end and 200 feet from the other, the operator is looking at around 200 feet of soaked cable. When installing a new cellular site, the TDR is particularly useful for ensuring that specific cables are connected to the proper antennas.

Broadcast vehicles that provide coverage for various sports games or live news events are also at particular risk of cable damage, as they may have hundreds of various cables on-hand at any given point — ready for a temporary installation. In these circumstances, TDRs are extensively used to quickly find faults in a variety of cables, including power, coax, and twisted pair, without the need for recalibration.

Depending on the cable, pulses and reflections will travel at different speeds. In order to operate this instrument, a lineman must tell the TDR the speed of the pulse in the cable, which allows the tester to convert the time the reflected pulses take into distances. Fortunately, a lineman can tell the TDR how fast these are traveling, based on the cable under test. This speed, the Velocity of Propagation (VoP), is stated as a ratio of the speed of the pulse in the cable 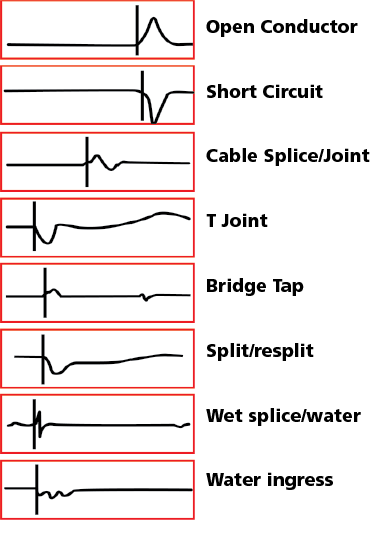 Figure 3. Various faults with corresponding trace on TDRdivided by the speed of light in a vacuum. A chart displaying typical VoP factors for telecommunication and twisted pair cables is shown in Table 1, below:

Before starting a test, the operator must set the pulse width on the instrument. TDRs have various pulse width settings for customization. While modern units are capable of automatically determining the proper width to best display the first event, the operator is still in full control of these settings. In general, the larger the pulse width, the higher the energy, and the further a signal will travel down a given cable. A TDR’s distance range is then determined by how far the transmitted pulse can travel, while still returning a detectable reflection back. Initially, it is recommended to set this range well above the cable’s anticipated length, so the operator is certain that he/she is seeing the full picture. Often times, large faults are missed because they are not included in the initial test’s display.

However, the width of the transmitted pulse affects the TDR’s ability to identify reflections, so it is not always effective to send the most powerful pulse each time. Depending on the length and type of cable under test, there is an associated “dead zone” where the TDR is essentially blind to detecting faults. This distance is generally close to the TDR but varies significantly based on the pulse width test setting. For communications coax cables, a pulse width of less than 1 nanosecond will only have a dead zone of 1 foot, whereas a pulse width of 4 microseconds could have a dead zone of 1,600 feet. Albeit large, this distance is rather insignificant if the cable under test is 60,000 feet long.

Gain is another variable that can be adjusted by the operator; however, it has no impact on the physics of the TDR’s test procedure. Rather, this feature allows the user to adjust the trace, so that it can be most easily viewed to identify faults. Gain is the degree to which the trace deviates from the horizontal, or simply put, how big or small the trace is zoomed. Both gain and pulse width can be set by the operator, however, modern testers automatically adjust these displays to show the trace of the most prominent element.

A change in impedance will either cause a positive or negative reflection, depending on whether the conductors go further apart or get closer together, respectively. The TDR translates these reflections to traces, which can be interpreted by the operator to indicate that certain events, such as opens, shorts, or splices, are present in the cable under test.

If the conductors move apart, this will be displayed as a bump on the trace, which is characteristic of an open conductor (Figure 1). Whereas, if the conductors are moving closer together, the operator will see a dip or sag on the trace, which is indicative of a short circuit (Figure 2). TDRs can detect other faults, as well, illustrated by their corresponding traces in Figure 3. When diagnosing a bridge tap or water ingress, the traces are often extremely subtle; relying on an operator with specific experience with these issues is recommended.

Modern TDRs are equipped with certain advanced features, including dual trace and step function, not available in traditional testers. With dual trace, a lineman can send two pulses on separate testing channels to run two traces simultaneously. For large cables with up to 32 twisted pairs, this function is useful for comparing the traces between dual pairs. Operators can quickly find faults by looking for the difference between the two pairs. If a trace is obtained immediately after installation, the dual trace function can be used months or even years later to identify new faults that may have developed by comparing the current trace to the historical record.

Historically, near-end faults are difficult to diagnose and often go undetected, as they often fall within the dead zone. However, new technology permits users to utilize the step function. Rather than providing a pulse, the step function sends a full-strength signal until a disturbance is detected, which makes detecting close-in faults much easier. Finally, advanced TDRs are capable of storing and recalling test results, as well as tagging traces for future analysis.

Although the capabilities of modern time domain reflectometers will likely continue to advance, TDRs will remain a trusted cable fault detection tool across a wide range of industrial applications. UP

The Author: Meredith Kenton is a digital marketing assistant for Megger, a global leader in electrical test equipment. She supports the U.S. distribution team and also writes the company’s weekly electrical testing blog.