Test sets are used in substation commissioning and routine testing of protection devices. Modern techniques support the user by creating test templates and the documentation of numerous tests, such as multi-functional protection devices. 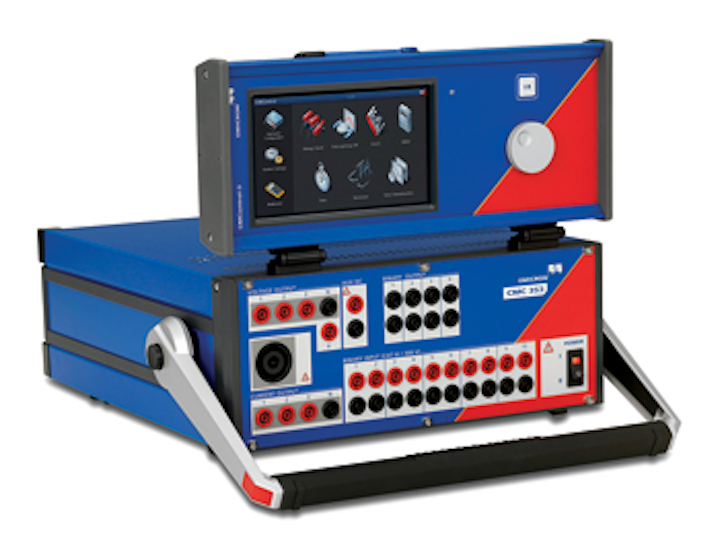 By Thomas Schossig and Stefan Schwabe

Test sets are used in substation commissioning and routine testing of protection devices. Modern techniques support the user by creating test templates and the documentation of numerous tests, such as multi-functional protection devices. There are various and diverse applications for a manual testing.

Protection systems play a key role for safe and reliable operation of electricity power systems. This is relevant for all power system grids in generation, transmission and distribution, industrial, railway, mining and marine applications. Properly working protection devices help maintain the safety of the system and safeguard assets from damage while assisting to ensure security of supply. To guarantee reliable operation, protection relays must be tested throughout their life-cycle, from their initial development through production and commissioning to periodical maintenance during operation.

In a classical protection test, test sets are used to generate analog quantities (currents and voltages) and evaluate the response of relays (starting and tripping). Figure 1 shows an example of such a device, equipped with a front control panel. Protection testing, both commissioning and routine testing, can be operated manually or automatically with the use of central test documents. For automated testing, a test document called test template can be used repeatedly, such as for a single feeder or for a protection device with different protection functions. This test template can be reused in future tests that allow automated testing.

Testing the multi-functional design of a numerical protection device usually requires the combination of different testing steps. Figure 2 shows an example of the test plan of a complex feeder protection.

The test plan can be prepared in the office. When running the test plan, all the defined test functions of each operational test module (such as overcurrent protection, distance protection, etc.) are executed before the program automatically switches to the next one, until all the modules have been completed. After the completion of the test, the software enters the results into the test plan document, which forms a comprehensive overall test report. After the testing process, the document still contains all of the test settings (protection device parameters, test modules used, test points, etc.) It can then be reused to repeat the test at a later date.

Especially in distribution networks and industry facilities, protection systems are often basic devices that only detect overcurrent and undervoltage. These simple relays can be tested with a fully automated PC-controlled solution. For many users, however, this seems like using a sledgehammer to crack a nut. The simplicity of the operation often is more important than the automation of the test, since protection testing is one of many tasks to be completed.

The typical tester, who tests the devices manually, applies test quantities to the relays, receives a reaction and assesses it according to the known nominal value. A suitable test set, therefore, must be able to provide the test quantities in the most convenient way possible. Through the internal calculation of currents and voltages from impedances, powers and symmetrical components parameters, for example, the testing tasks are better supported if direct control of the test device's current and voltage outputs is possible.

For every test, the proper documentation of results is important. Many users keep a manual protocol of their test results. Others, however, prefer automated recording of test results. This reduces the risk of error and can be used to improve traceability of the tests. Consequently, a manual test should offer the possibility to automatically save the measured values in a report.

The analysis of the many different ways of manual testing shows these can be reduced to two basic patterns:

1. Determination of the value at which the device under test (DUT) shows a reaction

2. Time measurement from the stimulation of a DUT until its reaction

The first test is usually called pickup test. One parameter (current, voltage, frequency, impedance, etc.), which is measured by the protection device, is continuously varied until the relay picks up, while the other parameters are kept constant. If complex values are varied, such as impedances, a modification of more than one output parameters may take place. To fulfill this task, it is helpful if the values supervised by the protection device can be directly maintained.

During time measurement, it is important that a change between definite states can be simulated. For most relays, this means a switch from an operational-state to a fault-state. The measured times are then the pick-up-time, which gives information about the speed of the protection device itself, and the dead-time, which is part of the concept of the protection coordination.

The requirements of test solutions for manual testing can be summarized as follows:
• Simple, intuitive operation;
• Support of pick-up testing;
• Support of time measurement based on condition changes;
• Support of reporting; and
• Calculation of currents and voltages from quantities such as impedances, power and symmetrical components.

Beside the PC controlled testing solutions, which offer a maximum functionality for automated testing, front panel controls also can be used by protection technicians for manual testing. The main advantage of this control is its instant availability for quick manual testing with test sets without starting a PC.

Modern front panel controls should be simple to operate without requiring special training of protection technicians. To achieve this, new approaches should be adopted. The adjustment of test quantities, for example, can be made through a control wheel with innovative and modern control concepts combined. The use of Smartphone is a good example.

The control wheel has proven to be a good solution with its direct functionality and the ease of control. In a modernized version, one can configure it with an adaptive acceleration algorithm that allows a user to work quickly and precisely.

Devices with control concepts, such as train ticket machines, are mostly controlled intuitively with a touch screen interface. This is a good reference for a test set that should also have a quick and simple control. A good example for such a concept is the OMICRON CMControl.

One of the important criteria of a control is its ease of operation. The CMControl can either be attached to the CMC test set as a front panel control unit or be detached and used as a handheld control device. Magnetic elements at the rear allow it to be easily attached to standard racks while the built-in stand works on every table. With its design and a display that can be read even in the sunlight, this device is suitable for daily use.

Overcurrent protection is arguably the most common protection solution. If an overcurrent relay is to be tested, the first step after the connection of the test device to the relay is a wiring check. For that, it is advisable to apply an unbalanced system to the relay and see whether the values measured and displayed by the relay match those applied. See Figure 3. Often a quick fault is applied to the relay to see if the binary output commands (pick-up and trip) are correctly wired as well.

The pick-up value is then tested. For an overcurrent relay, this is the current. Different fault-models are available that allow testing of different overcurrent elements-phase, residual, negative sequence, etc.

In Figure 4, a three-phase test is selected. For a directional overcurrent relay, additional parameters such as phase voltages are needed to determine the fault direction.

Through slow variation of the test value-either semi-automated, which has proven useful for PC-controlled testing, or with the wheel for front-plate control-the pick-up value is determined.

The reactions of the DUT during the test should be recorded to be able to determine the pick-up value, the drop-off value and the calculated drop-off ratio.

For manual tests, it is often necessary to determine the time response-such as the steps of an overcurrent characteristic (see Figure 5), the Z/t diagram of a distance relay, or the characteristic of an overcurrent time relay. An optimal solution for manual testing can be simple but allow the necessary measurements because such tests consist of repeated time measurements at different test values.

Particularly with measurements such as this, the application of the fault model leads to results that can be easily interpreted.

The challenges of commissioning and routine testing are diverse, and there can be different test application concepts. Test sets can be used with a suitable PC-software for automated testing. An additional control unit also enables fast and efficient manual testing. New possibilities arise through innovative approaches in the control unit. User-friendliness minimizes the time and effort required and allows an intuitive procedure for many protection testing tasks.