Wind Farms Whirl With use of High-density Polyethylene Conduit

Some of the largest wind farms in the United States are using large diameter, solid wall high-density polyethylene (HDPE) conduit to protect electrical cables and the environment. While the conduit provides long life, it is also helping projects be cost-effective. 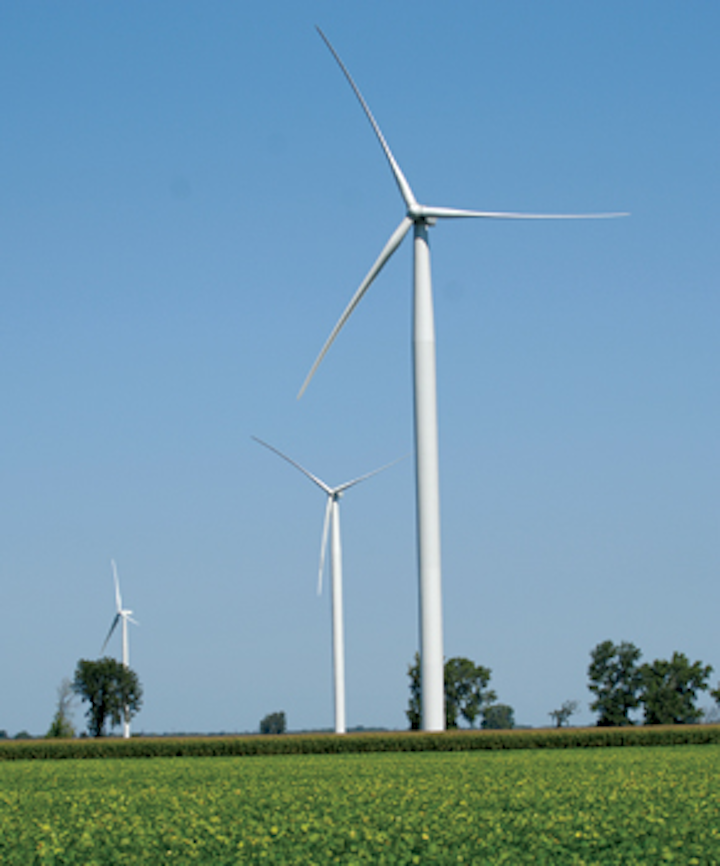 Some of the largest wind farms in the United States are using large diameter, solid wall high-density polyethylene (HDPE) conduit to protect electrical cables and the environment. While the conduit provides long life, it is also helping projects be cost-effective.

"HDPE conduit has the right cost-to-benefit ratio that includes the pipe stiffness necessary to withstand the weight of deep burial while being able to be flexible and strong enough to allow for horizontal directional drilling (HDD)," said Tony Radoszewski, executive director of the Plastics Pipe Institute Inc. (PPI), the major trade association representing all segments of the plastic pipe industry.

"It is ideal especially for projects where there is a need to reduce the amount of digging such as in a wetland or by going under roads to keep them intact. HDPE conduit can be 'snaked' underneath. Plus, the HDPE conduit is flexible enough to resist seismic shifts. The polyethylene itself is chemically resistant to high acidity or alkalinity from the soil as well as being waterproof-all of which protect the cable inside. The length of HDPE conduit in either long 'stick' sections or hundred-foot coils can reduce the number of mechanical joints necessary for the installation, which, in turn, reduces the overall project costs. 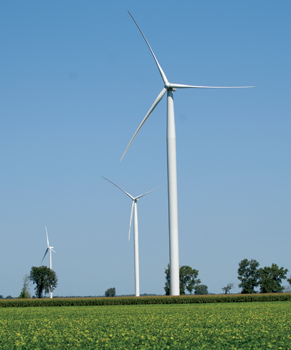 "What is especially important for electrical cable use is that HDPE conduit does not require any cathodic protection that would be needed to prevent corrosion of a pipe with a metal surface.

"These are just some of the reasons that the trend is very strong for the use of HDPE conduit in wind farm and solar farm projects whose basic premise is to protect the environment. This product adds to that charter."

One of the newest wind power operations, the Beebe Wind Farm in Breckenridge, Mich., has 34 operational turbines and another 16 came on-stream in 2013. The crew from M. J. Electric LLC in Iron Mountain, Mich., found the use of HDPE conduit also sped installation and enabled the crew to use either cut-and-cover trenching or horizontal directional drilling (HDD). The 34.5 kV lines are housed in the 8-inch diameter HDPE conduit and are buried as deep as 30 feet, with some runs 1,000 to 2,000 feet long. The land used for the Beebe Wind Farm is an agricultural farm.

"There are usually four or five turbines on a circuit, which are strung together with an underground collection cable out in the farmer's field, or the grasslands, depending on what part of the country we're in," said Rick Moore, director of purchasing for M. J. Electric. "Ultimately, each circuit collecting the energy generated by the wind turbine ends up at a substation. M. J. Electric was responsible for the underground collection system, substation and subsequent transmission lines at Beebe. We used HDPE conduit exclusively for underground boring operations for runs under roads, ditches, ponds, creeks and under environmentally-sensitive areas. We standardized on either SDR 11 or SDR 13.5-both these standard dimension ratios will provide the strength for the long bores." 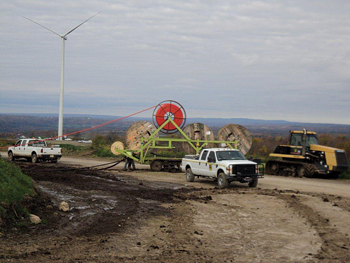 The large gauge collector circuits typically take 10-15,000 feet of conduit, which was provided for the Beebe project by Endot Industries Inc. in Rockaway, N.J., in 40-foot and 50-foot lengths. Called Enduct IDE 850, SDR 11, the side walls are 3/4-inch thick with a nominal outside diameter of 8.6 inches and complies with the American Society for Testing and Materials (ASTM) F2160 standard, Standard Specification for Solid Wall High Density Polyethylene (HDPE) Conduit Based on Controlled Outside Diameter (OD).

Rod Brossart, general foreman for M. J. Electric, said: "We'll start on a project with our directional boring crew about a month or so ahead of the trenching. If it's a longer bore shot it might take a couple of days to complete, and we want to make sure that our trenching crew doesn't get caught up. We generally have anywhere from eight to 11 on the crew.

"On a wind farm the only things you are directional boring is a road, a utility crossing or a wetland area. At Beebe, some of the drainage ditches were 12 to 15 feet deep and 25 to 30 feet wide. I think we were eight to nine feet below the bottom of the ditch, so in some parts that put us 25 feet deep if you were to dig straight down from the top of the ditch. For this, when we're in a farm field like Beebe where there wasn't any rock, we use a drain tile-type trencher."

According to PPI's Radoszewski, this is a significant situation where the use of HDPE conduit can provide labor savings as well as a safety advantage.

"When a crew is trenching down some 25 feet, using HDPE conduit sections that are put together on the surface or coming off a coil is quicker and safer than having the crew doing the work down in that trench," Radoszewski said. I've seen crews cut a trench, heat fuse a couple of hundred feet of 50-foot section HDPE conduit and cover it up in just a few hours. And with a maxi-coil, the process is really fast. That can't be done with any other material. 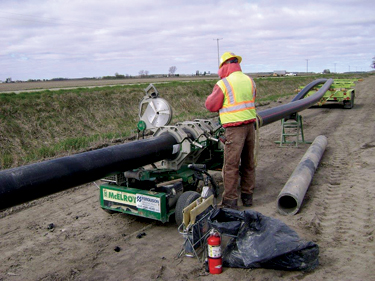 "When we directionally bore, we can steer it but can only angle it down about 10 percent-basically one foot every rod. So, if we're going across a drainage ditch that is 30 feet wide but 15 feet deep, we have to do our math so that we're far enough back to set up and be able to be at the depth needed at the middle of that ditch and be able to come back up. Brossart and his crew did the proper planning, which is critical to the success of any HDD job."

"For our runs, we trench up to a certain point-say 20 feet before we get to the bore," Brossart said. "The excavation is made, there's usually a splice on one side or the other of the bore, and the splice is made and the trenching crew begins operations on the opposite side and continues. It's easy to set up the fusing equipment, put the sections together, and pull it straight in through the directional bore.

"We'll backlash the cable. We do everything possible to minimize the number of splices. We just don't say 'you're starting at tower one, and heading to tower two and three'-we take a look, plan the cable runs and manage the number of splices. Between tower one and two there might be two or three directional bores and we'll figure out how we can do it with either no splices or just one splice. We may end up pulling 500, 600 or 800 feet of cable through a bore, and that will get us to where there's just one splice rather than every time you pull up to a bore there's a splice."

After the conduit is pulled or in the trench, the cable, which for the Beebe collector circuits was 35 kV Underground Residential Distribution (URD) aluminum power cable, was pulled through.

Distance between towers varies. "For the typical installation, we're seeing them 1,100 to 2,200 feet apart," Brossart said. "At Beebe, the way the layout was, it seemed that the county would allow only two turbines to be installed every square mile. There might have been 2,200 feet between them, but from either of those two turbines to the next one could have been 5,000 or 7,000 feet."

"In the past, it would be typical to use the same cast iron pipe found in water systems," Moore said. "This would certainly be a premium cost for conduit or galvanized rigid steel conduit, and use couplings to join sections just like in any industrial application. These products come in 10-foot lengths vs. the 50-foot lengths we get for the HDPE conduit, so there is certainly a cost savings with not having to deal with such great heavy small pieces; we can deal with longer, bigger sections. From our standpoint, HDPE is certainly the way to go."

Moore also agreed with PPI's Radoszewski's observation about the life of pipe. "Certainly corrosion is an issue. People put steel pipe underground all the time, whether it's a gas pipe or a water line. HDPE provides a high degree of protection regardless of the chemicals in the ground, especially around farms. HDPE certainly wins in that regard from a corrosion standpoint."

As for the industry perspective of the future, Radoszewski said, "The latest Department of Energy figures state that by 2030 wind power could account for approximately 20 percent of the United States' electric supply."

About PPI: The Plastics Pipe Institute Inc. (PPI) is the major trade association representing all segments of the plastic pipe industry and is dedicated to promoting plastics as the material of choice for pipe applications. PPI is a technical, engineering and industry knowledge resource, publishing data for use in development and design of plastic pipe systems. In addition, PPI collaborates with industry organizations that set standards for manufacturing practices and installation method.