This year marks the 50th anniversary of the Osmo-C-Truss wood pole restoration system. Installations of the C-Truss and C2-Truss have restored more than 1 million poles nationwide. 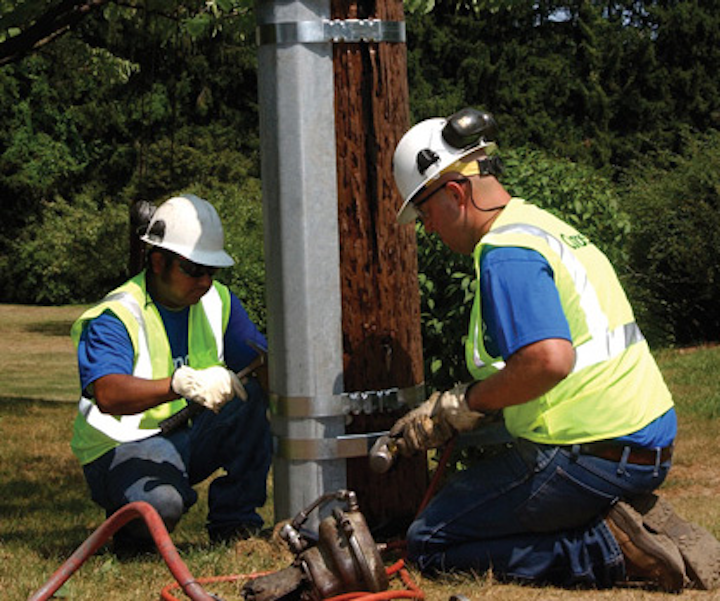 By Nelson Bingel and Chad Newton

By Nelson Bingel and Chad Newton 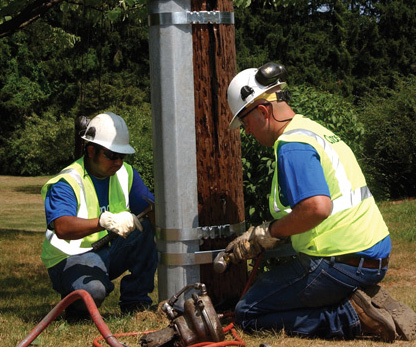 This year marks the 50th anniversary of the Osmo-C-Truss wood pole restoration system. Installations of the C-Truss and C2-Truss have restored more than 1 million poles nationwide. These restorations represent more than $2 billion in savings for pole owners when compared to pole replacement costs, and the life extension provided by these systems has been shown to rival the expected life of a pole replacement.

The first wood utility poles were installed more than 100 years ago, and now an estimated 150 million wood poles provide the support system for much of the electric grid. As poles age, the original preservative treatment becomes less effective at preventing decay in the groundline zone where the pole is most susceptible to decay. Inspection of the groundline zone, especially when excavation is included, monitors the condition of a pole and is recommended and sometimes required on a cyclical basis. The excavation also provides the opportunity to apply supplemental preservative treatment--a booster shot to the original treatment that helps prevent decay and extend the life of a pole.

Poles whose remaining bending strength at the groundline is below the requirements of the National Electrical Safety Code (NESC) are often referred to as rejected poles or rejects. The code requires pole owners to restore or replace these poles. Pole restoration with the Osmo-C-Truss system has provided pole owners with a cost-saving option to pole replacement for half a century.

The flexibility of the installation method makes it a good solution for poles with difficult access, those installed in concrete, or poles having various attachments. Because historical data validates the significant life extension provided by the C-Truss system, the cost can be capitalized and used to help optimize capital budgets.

The Origin of Pole Restoration

In 1965, the original C-Truss was a half-round channel that was driven alongside a pole and secured with steel banding. The first C-Truss systems were manufactured from lengths of pipes that were not acceptable for oil pipeline applications. These repurposed oil pipes were cut in half longitudinally, creating a C-shaped cross-section. In the early years, utility companies viewed this as a temporary solution that may only have extended the useful life of a pole for five to 10 years. Poles restored during this time, however, can still be found in service--providing evidence of a much longer life extension. Figure 1 shows photos of a repurposed oil pipe truss, the original C-Truss, still in service more than 45 years after installation.

The repurposed oil pipe restoration was awarded a patent entitled "Reinforced Pole Structure and Method of Banding a Reinforcing Stub to a Pole," issued to The Kamphausen Co. and purchased shortly thereafter by Osmose. Figure 2 includes some of the original patent drawings.

In the 1960's, utility companies often conducted their own testing of new products. Figure 3 is an example of full-scale testing of the early C-Truss system at a Midwestern utility company.

As demand for steel truss restorations increased, Osmose began manufacturing trusses from steel plates. The flat plates were formed to simulate the radial shape of the oil pipe trusses and tested to ensure the appropriate strength was achieved. Another enhancement included incorporating high strength low alloy steel plates, which provided more bending strength (60,000 psi) without an increase in weight.

In the mid 1980's, the C-Truss had its first large design overhaul. The general C-shape was maintained but was optimized by creating truss sizes that efficiently coincided with NESC code requirements. Higher strength steel (80,000 psi) was incorporated to achieve greater bending strength in lighter weight trusses, resulting in lower cost, higher value solutions.

As the capabilities of the steel truss improved, the banding system, used to secure the truss to the pole, was also enhanced. Industrial banding is protected against corrosion by a thin zinc coating applied through the electroplating process. This thin corrosion barrier is not adequate for long-term outdoor installations, so Osmose began manufacturing hot-dip galvanized banding for optimum protection. This banding provides high yield strength (138,000 psi) and provides three times the amount of corrosion protection over electroplating.

The redesigned C-Truss system was tested and evaluated throughout the latter 1980's and early 1990's. Full-scale load tests were independently witnessed to validate results, and several utility companies conducted their own on-site validations across the country. Utility companies in Florida, Ohio, Missouri, Texas and California performed successful load tests, which gave confidence to customers that the C-Truss was a reliable restoration solution. Figure 4 shows this improved system in service.

In the late 1990's, higher strength steel (100,000 psi) became more readily available. Osmose began to develop a new truss that could use this higher strength, lighter weight material. Higher yield strength steel trusses behave differently than trusses made with lower yield strength and should not be directly substituted without considering the impact on overall performance. For this reason, a new cross-sectional shape was developed for the higher yield steel to have an improved margin of performance over the C-shaped trusses.

Proposed truss shapes could now be tested using modeling software that employs finite element analysis (FEA). Engineers used FEA to evaluate multiple proposed cross-sectional forms before any physical prototypes were made, saving substantial development time. An example of a three-dimensional FEA model showing truss stress under load can be seen in Figure 5. Observing concentrated high stress areas and the behavior at failure in these models lead to improved iterations until an optimal design was determined.

After extensive research, development and testing, the Osmo-C2-Truss was introduced in the early 2000’s. The patent-protected C2-Truss provides a lighter, stronger and lower cost solution for restoration, providing pole owners with a greater incentive to restore rather than replace their rejected wood poles. Figure 6 shows an installed C2-Truss with a brown paint coating applied for aesthetics and additional corrosion protection.

Table 1 shows the data from inspection results of previously trussed poles between 2005 and 2008. These pole owners had large restoration programs paired with inspection and treatment programs that facilitated the collection of this data.

A majority of the 2 percent to 3 percent deemed no longer serviceable were caused by above ground defects. These conditions, which are outside the groundline area, no longer meet code even though the groundline portion of the pole still meets NESC requirements.

As the age of the restoration increases, the population inspected decreases because of the lower rate of steel truss installations in the early years of the C-Truss. Although the population decreases, high serviceable rates are still maintained. Overall, the data supports the claim that restoration is a long-term solution and can provide additional years of service comparable to the expected life of a new pole.

To ensure optimal life extension, all truss installations should be paired with remedial treatments--applied to the pole to arrest further pole decay. Pole owners should continue to include trussed poles on the same inspection and treatment cycle as the rest of the pole plant. This will enhance the original preservative treatment to inhibit decay through another cycle.

The Next 50 Years of Restoration

As technology evolves, engineers continue to evaluate designs, materials and processes to provide the best pole restoration solutions for pole owners. With 50 years of restoration experience, work will continue toward providing new innovations that safely, reliably and cost-effectively restore code-mandated strength for a fraction of the cost of pole replacement, without service interruptions.

About the authors: Nelson Bingel has 30 years of experience focused on structural issues related to overhead lines. He serves on several IEEE technical committees for overhead lines and is chairman of Strength & Loading in the NESC and chairman of the ASC O5 committee, which develops specifications for new wood poles. In his current role as vice president of Product Strategy, Bingel overseas research and development of improved structure inspection processes, preservatives and restoration systems.

Chad Newton is director of Product Strategy at Osmose. In Newton's current role, he oversees the design, development and implementation of Osmose's wood pole restoration products and services.