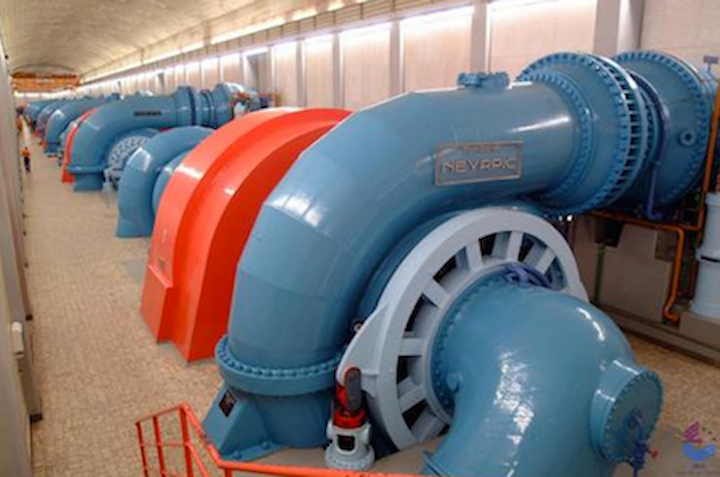 Pumped storage, as the most cost-effective form of large-capacity grid energy storage available, balances load and enhances reliability by time-shifting off-peak generated electrical power for use during peak demand. It pumps water from lower to higher elevation during off-peak use, and produces electric power during peak use by releasing the water to run through power generation turbines.

But many hydropower pumped storage facilities are decades old, requiring rehab to enhance life, capacity, efficiency, and resolve groundwater leaking in (infiltration) or out (exfiltration) due to leaks and cracks. Unresolved, such issues can lead to EPA, FERC, and community scrutiny or fines, as well as costly, time-consuming repairs.

To optimize hydropower pumped storage and resolve groundwater leakage issues such as infiltration and exfiltration, more facilities are turning to advanced waterproofing methods such as polyurea coatings and linings.

Polyurea is one of the few protective coating and lining systems that has the ability to release frozen ice. It also can be “matched” the closest to the expansion and contraction cycles of various substrates like asphalt, concrete, and steel to minimize or even avoid cracking, and disbondment. Some advanced polyurea coatings are designed not only to cure in as quickly as one hour, but also to last for decades with minimal maintenance.

Water leakage causing cracks can develop in aging pumped storage stations for various reasons ranging from earth movement to daily or seasonal temperature changes that cause expansion and contraction, often referred to as freeze-thaw.

Harsh winters can take a particular toll on asphalt, which can lead to repaving projects costing millions of dollars. On areas where the ice is directly attached to the asphalt, damage often occurs as it is released during thaw, taking chunks of the asphalt with it to the bottom. In addition to the surface damage and degradation of the structure, these large chunks and pieces of asphalt can cause major problems with the pumping equipment leading to more maintenance costs beyond the structure itself.

Regardless of the reason, pumped storage stations can lose hundreds of gallons of water per minute due to leakage, reducing their effective ability to store power and raising cost.

Traditionally, pumped storage station maintenance repairs were attempted with a number of different materials including tar, emulsified rubber, and various epoxies applied to the surface. However, these traditional coatings lack the flexibility to move and flex with concrete or asphalt and will crack. None, in fact, combine the ability to waterproof concrete and asphalt while bridging current and future cracks.

Instead, water facility managers are turning to polyurea coatings and linings, which are one of the few protective coatings that can stand up to the expansion and contraction cycles of substrates like concrete, asphalt, and steel. Some advanced polyurea coatings not only have high tensile strength, but also the flexibility to elongate 400% and bridge sizable cracks.

One coating material that is cost-effectively stopping pumped storage station leakage is an advanced pure polyurea by VersaFlex, a manufacturer of spray applied protective coatings and waterproof membranes for the U.S. reservoir, highway, rail, bridge and tunnel markets.

The spray-applied coating creates a seamless, waterproof, durable protective liner that stops leaks and strengthens the integrity of the entire storage structure. It is designed to withstand decades of freeze-thaw cycling, wide variations of temperature and humidity, and in the late 1990s was issued a 75-year lifespan by Parsons Brinckerhoff on the famed Boston Tunnel Project.

With minimal crack repair and surface preparation, the polyurea coatings can be thick film applied directly to the asphalt or similar substrate. An alternate application method is to pre-spray the polyurea to geotextile fabrics that are placed above the substrate around the site. The same material used to form the seamless waterproof membrane on the geotextile fabric is then used to fuse the panels together. The result is a strong, durable, flexible, seamless, monolithic liner.

The presprayed panel method can sometimes mitigate the need for certain surface or crack repairs, since the membrane can have different requirements and methods for adhesion to the structure.

With either method of application, the polyurea coatings exhibit superior physical properties such as high elongation, crack bridging, hardness, and tensile strength to create a robust industrial liner that protects, strengthens, and waterproofs pumped storage facilities.

“When the substrate moves or cracks, polyurea fills in and bridges over the cracks,” says Fillhart. “The polyurea moves with the substrate without affecting the liner, which extends its waterproof integrity.”

Pumped storage facilities also require a fast cure system with rapid return to service. The polyurea coating is among few products on the market capable of delivering such immediate use, with return to service in hours after installation.

When the application is direct to the concrete or asphalt substrate, only minimal surface preparation such as power washing is required. Other substrates may require preparation and primers. Because of the polyurea’s ability to set and cure quickly, it also minimizes pumped storage facility downtime, which can translate into thousands of dollars per hour savings.

“Where asphalt repair can take about a week to inspect, cut out, patch, seal, and cure, polyureas can applied and the area returned to service in as fast as one hour,” says Fillhart.

One pumped storage facility in the U.S. spent 15 million dollars 8 years ago to repave an asphalt-lined upper reservoir, yet was still losing hundreds of gallons of water per minute. The expected life of the asphalt resurfacing was supposed to be 15-20 years, but due to harsh environmental conditions lasted less than ten. Another repaving is scheduled for 2018 at an estimated 25 million dollars.

On the pumped storage reservoir test areas, of particular note was the success of the polyurea to naturally release the frozen ice from the rim of the reservoir’s surface. Observations during the test noted that even when ice was frozen to the entire perimeter of the 2.5-mile structure, no ice has been visible on the polyurea test areas going into a third winter season.

Due to the success of the polyurea test areas, the facility is planning to coat an additional 40,000 sq. ft. this spring.