The city's publicly traded utility is divesting from coal in favor of solar energy and plans to build solar farms at neighboring Fort Bliss to help the U.S. Army base consume only as much energy as it creates 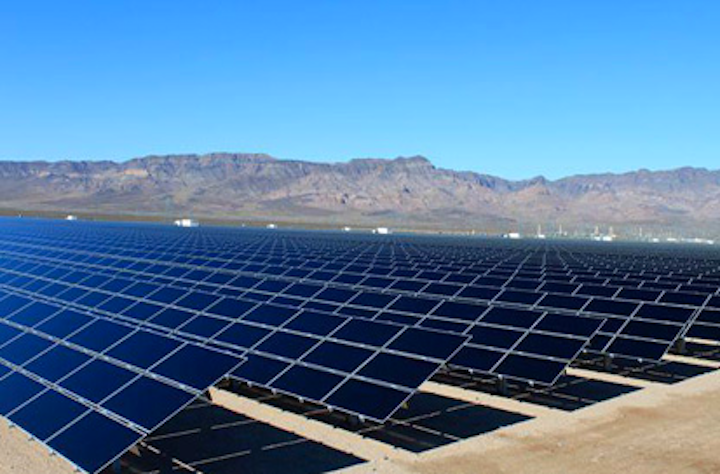 EL PASO, Texas (AP) — In the parched Chihuahua Desert, El Paso has pioneered a strategy of resource management that could set the standard for West Texas and arid regions worldwide.

The city's publicly traded utility is divesting from coal in favor of solar energy and plans to build solar farms at neighboring Fort Bliss to help the U.S. Army base consume only as much energy as it creates.

El Paso's Housing Authority is spending about $250 million to bring public housing units up to certified green building standards, and the city is making other environmentally friendly upgrades, such as converting parking lots and roads into green space and pedestrian-only malls.

Perhaps most significant, though, El Paso is embarking on the largest toilet-to-tap municipal water reuse program in the nation.

"In an area where it doesn't rain you have to explore every viable option, and that's a viable option," resident David Chicka said at a recent public forum on the city's toilet-water reuse project.

A spare ethos infuses El Paso, a mountainous border city of about 675,000 where public employees work 10-hour, four-day work weeks to save on weekly energy costs, the zoo's elephants' dung is used for compost and public charging stations with electrical outlets are powered with solar panels. This do-or-die mindset has paved the way for big investments in resource management, and some urban planners are studying how El Paso survives global shocks, including climate change.

"We embrace our adversity and wear our ability to withstand it like a badge. That's an important piece of our culture," said Nicole Ferrini, El Paso's first chief resilience officer, a post supported by the Rockefeller Foundation's 100 Resilient Cities program.

As water sources grow scarce in West Texas, some cities have started treating wastewater for human consumption, either filtering purified wastewater through an environmental buffer, such as a lake or an aquifer, before putting it into a drinking water distribution system, or by redirecting treated wastewater straight into potable water supplies.

El Paso's advanced purification plant will be the largest direct water reuse project in the U.S. when it begins operating in 2018. Two other Texas cities, Big Spring and Wichita Falls, have smaller direct reuse operations.

The El Paso plant will take treated sewage water through a four-step purification process that includes ultraviolet light and disinfection before feeding it into the city's drinking water supply. A pilot program will be monitored by the Texas Commission on Environmental Quality. The state agency must sign off before the $82 million plant can begin construction and operation.

When El Paso initially broached the topic of toilet water reuse with residents — in a 2013 telephone survey involving about 1,200 English- and Spanish-speaking residents — 84 percent responded favorably, said Christina Montoya of the city's water utilities department. Some residents said they were concerned about the city running out of water, she said, and were pleased at proactive measures to address possible shortages.

"We can laugh about the toilet water but look what we can do to this water," said Ellen McDonald, president of the Texas section of the WateReuse Association.

Paisano Green, which opened in 2012, is a complex of multistory buildings powered by wind turbines and solar panels. Energy-saving features like air-tight windows facing away from the sun and a western canopy wall that shields units from afternoon summer heat and cold winter winds mean that residents in the 73-unit compound paid about $8 per month per unit for electricity last year. Excess electricity is sold back to the grid.

Drought-tolerant native plants dot the grounds, and an electric car charging station is free to residents, and available to the public for a small fee.

In five or six years, all of the city's 6,100 public housing units will be upgraded to LEED standards, said Shane Griffith, former spokesman for the Housing Authority. "It's truly revolutionary," he said. "It's going to make a massive difference to the city's energy use."

For the regional utility El Paso Electric, divesting from coal in favor of solar farms was an obvious business decision.

"We live in a desert climate and water is always at the forefront of our minds. One of the reasons we love solar is because solar panels don't use water," said Mary Kipp, the utility's president.

Indeed, Texas' fourth-largest city is among the sunniest in North America, making it a "goldilocks" for solar farms, said the utility's chief executive, Tom Shockley.

El Paso Electric has already doubled its solar sources, which now constitute 6 percent of the overall energy mix and power 38,000 homes. By 2016, the utility will not rely on any coal-powered plants — a bold step in a state whose governor, while attorney general, sued the EPA over federal emissions rules.

The utility has also partnered with Fort Bliss, the Army's sprawling 1,750-square-mile base in El Paso, to develop a 200-acre solar farm. Once complete, solar will generate 15 percent of the base's energy needs.

"The idea is that cities frequently face the same threats," said Young. "A place like Amman, Jordan, with increasingly frequent water shortages, can learn from El Paso."