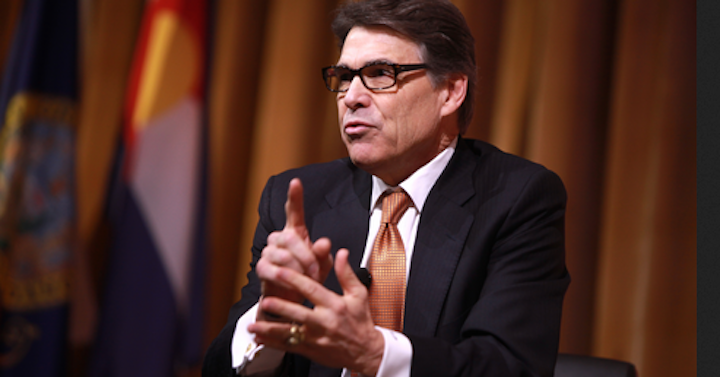 Experts disagree and say Trump is attempting to solve a problem that doesn't exist.

In a speech in Austin, Texas, Perry said coal and nuclear plants "are retiring at an alarming rate that, if unchecked, will threaten our ability to recover from intentional attacks and natural disasters."

"The president is right to view grid resilience as a serious national security issue," Perry said at a conference on cybersecurity. He's taking steps as directed by Trump to keep coal and nuclear plants open.

A regional transmission organization that oversees the power grid in 13 Eastern and Midwestern states said there's no immediate threat to system reliability. Pennsylvania-based PJM Interconnection said Trump's proposal to force electricity sales from coal and nuclear plants would damage markets and be "costly to consumers."

"There is no need for any such drastic action," the group said, calling the electrical grid in a region that stretches from Illinois to Virginia "more reliable than ever, with 23 percent reserve and billions of dollars of new investment" in a range of power sources.

"Fuel security and resilience are phony issues," Hughes said, calling concerns about national security a "pretext" that allows the federal government "to pick winners and losers in the energy markets" by propping up uneconomic power plants that have struggled to compete against cheap, abundant natural gas and renewable energy such as wind and solar power.

Hayes, a former deputy Interior secretary under President Barack Obama, said, "It would be a fool's errand for the Department of Energy to try to concoct a national security argument as a solution to a problem that does not exist."

"Donald Trump is ginning up a fake grid emergency to bail out donors in the coal industry while ignoring a real grid emergency that has killed thousands of Americans in Puerto Rico," Beyer said, citing a recent report that more than 4,000 people may have died in Puerto Rico in the wake of Hurricane Maria, a significantly higher death toll than previously estimated.

Beyer called Trump's directive "blatantly corrupt" and said the president was acting on behalf of coal industry executives such as Murray Energy CEO Robert Murray and others who made major donations to Trump's presidential campaign.

Murray and other coal executives were being "rewarded" for their investment in Trump, Beyer said.

Trump on Friday directed Perry to take "immediate steps" to bolster struggling coal-fired and nuclear power plants to keep them open, calling it a matter of national and economic security.

Trump, who has frequently promised to bring back coal jobs, believes that impending retirements of coal and nuclear plants are harming the nation's electric grid and reducing its resilience, the White House said.

A plan being considered by the Energy Department would direct PJM and other regional transmission operators to buy power from coal and nuclear plants for two years to ensure grid reliability while promoting national defense and maximizing domestic energy supplies, the Energy Department said in a draft memo.

If ordered, the action would represent an unprecedented intervention into U.S. energy markets.