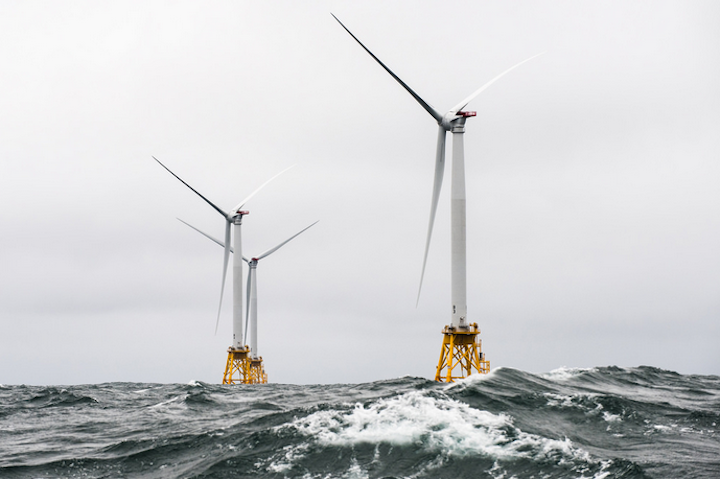 PROVIDENCE, R.I. (AP) — A Rhode Island company is going to build a wind farm that will be 10 times the size of the nation's first offshore wind farm.

Deepwater Wind says the new 400 MW wind farm will also create more than 800 jobs and result in $250 million in investments in Rhode Island.

Democratic Gov. Gina Raimondo and other officials visited the Port of Providence on Wednesday for the announcement.

Deepwater Wind also built the nation's first offshore wind farm off Block Island, Rhode Island. It has five wind turbines. With this latest project, the company plans to build up to 50 turbines south of Martha's Vineyard.

"It is an enormous clean energy machine," Deepwater Wind CEO Jeff Grybowski said. "It will displace about 650,000 metric tons of carbon dioxide every year. It is one of the most consequential clean energy projects in the history of the northeast United States. And we're going to build it and deliver that at low cost."

Grybowski said he couldn't say exactly what the price of the energy will be because Deepwater Wind must negotiate a contract with utility company National Grid. He said it would be competitive with traditional sources of fuel and a "game changer" in replacing those sources.

The company says it will take about 800 people and roughly $1 billion to build the wind farm. Another 50 permanent jobs will be created.

Raimondo called it a fantastic day for Rhode Island because of the amount of clean energy that will be produced and the number jobs created. She said Rhode Island can be an epicenter for the offshore wind industry. She said she thinks some of the companies that make turbines will eventually move to the state.

"This is big. This is about as big as it gets," she said.

Both the Rhode Island and Massachusetts wind farms, which the states describe as a collaborative effort, will be located south of Martha's Vineyard. The Vineyard Wind project will be Massachusetts' first offshore wind farm.

Local construction on the Revolution Wind project could start in Rhode Island in 2020 with commercial operations by 2023. The turbines are expected to generate enough energy to power more than 200,000 homes, or about half the homes in Rhode Island.

The wind farm will be in a 256-square-mile federal lease area. Deepwater Wind plans to build 15 turbines in that same area to supply renewable energy to Long Island, New York.