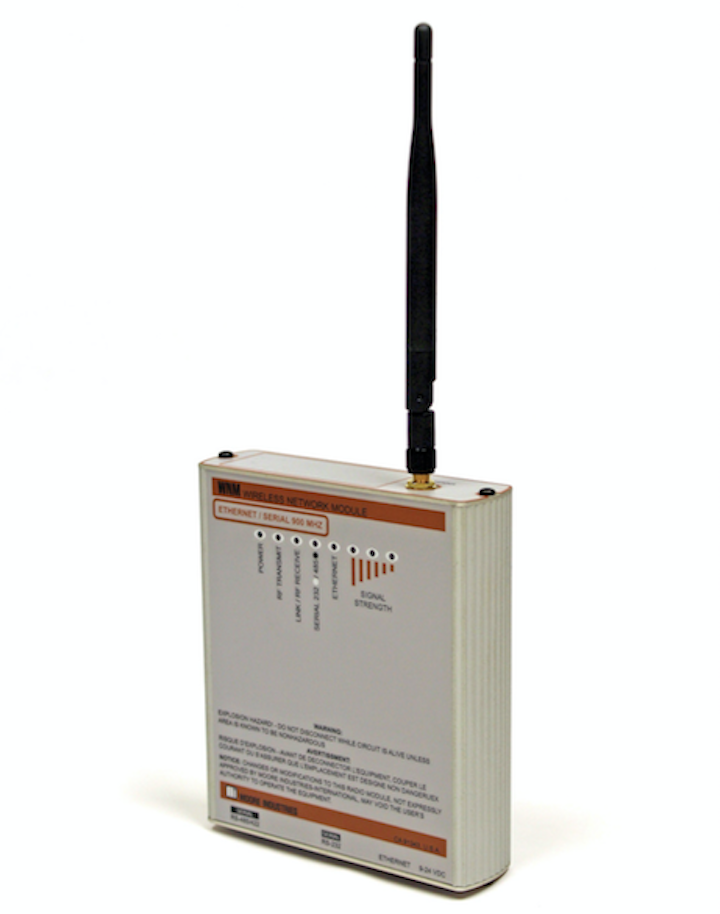 Energy management: The WNM Wireless Network Module from Moore Industries has been redesigned with a new, sleeker housing and now incorporates both Serial and Ethernet communications in one model. The WNM, originally released in 2011, has been an accurate and reliable solution for sending process signals between remote field sites. The WNM provides a low-cost wireless communications link between field sites that are in rugged or impassable terrain, with a single unit transmitting for up to 30 miles and the ability to act as a repeater for a virtually unlimited transmission range.

The bi-directional WNM employs Spread Spectrum Frequency Hopping technology to avoid interference problems caused by crowded radio spectrums. This technology allows multiple radio networks to use the same band while in close proximity. Operating at standard operating frequencies of 902-928MHz or 2.4-2.4835GHz, the WNM does not require a regulatory license and can typically be installed without performing costly RF site surveys.

When it is set in the Smart Switch Ethernet (SSE) mode, the WNM enhances the speed and reliability of data packet transmission by determining the most efficient path of broadcast (including direct to a single radio or to some or all radios in a network) on a packet-by-packet basis.

The WNM is ideal for use with the Moore Industries NCS NET Concentrator System®, as well as other SCADA and distributed I/O systems. As a result of its redesign, the WNM now supports data communications networks that use Ethernet and serial (RS-485) communications in one model. In each WNM network, one module is set as a Master. This can be set to communicate with a single WNM remote unit in a Point-to-Point architecture or multiple WNM remote units in a Point-to-Multipoint architecture.

WNM modules are designed for long-distance data transmission; 902-928MHz units can transmit up to 30 miles, while 2.4-2.4835GHz units have a transmission range of up to 15 miles. The range can be extended indefinitely by using multiple WNM units as repeaters to relay signals. This also allows for the creation of WNM networks when a direct line of sight cannot be established.

The WNM is easy to install and use, as it can be factory-configured to fit user specifications before being shipped. In addition, free PC configuration software allows end users to perform on-site configuration, parameter changes and add WNM modules to a network.

About Moore Industries-International Inc.:
Based in North Hills, CA, Moore Industries is a world leader in the design and manufacture of rail, panel and field instruments for industrial process control and monitoring, system integration and factory automation. The company has direct sales offices in the United States and additional strategic worldwide locations in Australia, Belgium, the Netherlands, the People's Republic of China and the United Kingdom. The company serves a variety of industries such as chemical and petrochemical; power generation and transmission; petroleum extraction, refining and transport; pulp and paper; food and beverage; mining and metal refining; pharmaceuticals and biotechnology; industrial machinery and equipment; water and wastewater; and environmental and pollution monitoring.

For more information about Moore Industries or other products, click here to go to Utility Products’ Buyers Guide.