In the wake of the storm of the century, Entergy New Orleans had no choice but to rebuild itself 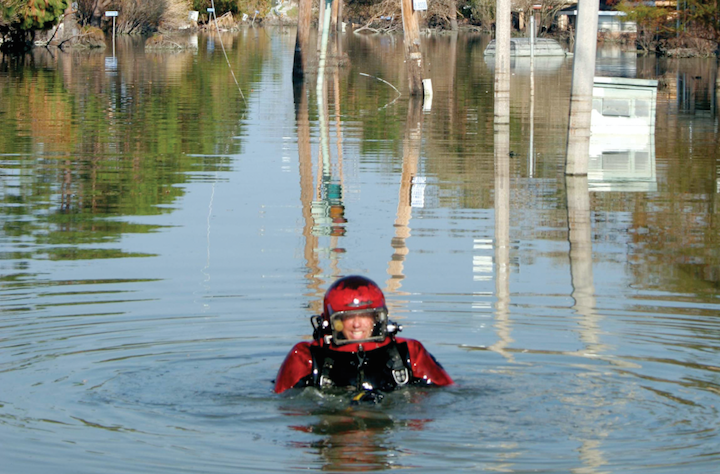 Entergy New Orleans employees and customers could be forgiven for wondering if they would ever wake up from the logistical and personal nightmare that was Hurricane Katrina. Even 10 years later, the memories are thick and the emotions close to the heart for those who endured the storm that killed nearly 2,000 people, drove the utility into bankruptcy and disrupted power for more than a year in some places.

“Just talking about this takes me right back there,” said Toni Green-Brown, public affairs manager for Entergy New Orleans.

Katrina hit land on Aug. 29, 2005, with unrestrained fury and yet a misleading softer front edge. In fact, Entergy had mobilized a response team in advance and was getting immediate word back that it wasn’t as bad as originally feared.

“We had boots on the ground,” said Melonie Stewart, director of customer service for Entergy New Orleans, which provides electric power and natural gas to more than 200,000 customers combined. “Afterward (once the storm made landfall) they were reporting back to us that things looked pretty good out in the field. We had dodged a bullet.”

The real trigger, however, was pulled when some of New Orleans’ levees failed, sending what looked like Biblical volumes of water pouring into large parts of the city. Many sections of the city filled up like a bowl, and the Lakeview, Lower Ninth Ward and eastern sections of the city were devastated. Entergy New Orleans could not even send crews back for restoration until the water was pumped out two weeks later.

The priceless human and $100 billion-plus financial toll of Katrina upon New Orleans is well known. First, there were those who died, those who were forced to move and those who never came back. The Lower Ninth is still vastly diminished. Even today, the citywide population is not yet 90 percent of what it was in early August 2005, although the tourism industry is vibrant once again.

“What we’re seeing, which is so exciting, is the wonderful economic development rebuild that’s occurred since Katrina,” said Stewart, noting that parent company Entergy Corp. chose to keep its headquarters based in downtown. “A lot has happened since then.”

In pure utility terms, Entergy New Orleans basically was forced to rebuild itself, too. Just within the city, Entergy lost 1,763 distribution poles, 12 out of 22 substations were flooded and 95 of 125 miles of transmission lines went out of service. Some 123,000 of the utility’s then 189,000 electric customers were unable to accept service for months because of extensive damage to their homes or businesses; Entergy New Orleans also lost more than half of its natural gas customers in the region.

A story in the January/February 2006 edition of Utility Automation and Engineering T&D (now POWERGRID International) magazine about Entergy Corp.’s losses from Hurricane Katrina indicated that the storm created “the largest number of power disruptions from a single event in Entergy’s history.” Overall, the massive storm knocked out about 263 substations and 1,550 feeders.

Polly Rosemond, who is manager of regulatory affairs for Entergy New Orleans, remembered that she did not get to turn the lights on in her home, in the eastern part of the city, until October 2006—14 months after Katrina. And she was one of the first three neighbors back in her neighborhood.

“I was very happy,” Rosemond said about that day, noting that she knew that the 14,000 workers, deployed to repair Katrina damage not only in New Orleans but throughout the Entergy system, were hard-pressed to keep up with their unrelenting workload. “We were in the streets celebrating.”

In September 2005, only one month after Katrina made landfall and 13 months before power was restored to Rosemond’s home, Entergy New Orleans was forced into Chapter 11 bankruptcy. The parent Entergy Corp. was dealing with more than $1 billion in restoration costs—half of which was falling on the shoulders of the New Orleans subsidiary—while the utility virtually had no revenue base from which to recover costs. 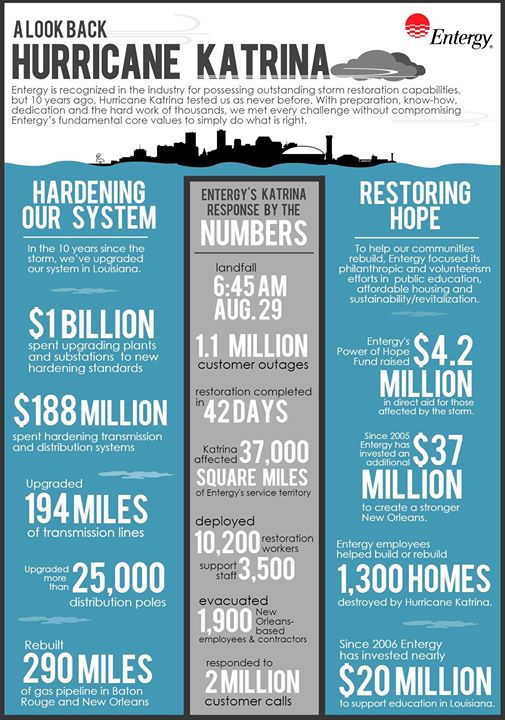 Entergy New Orleans received loans from parent Entergy Corp. just to continue utility operations and keep paying wages and benefits to its employees, many of whom were living in temporary or borrowed housing and also commuting from other locations. Entergy Corp. had to move its financial offices to the Houston suburb of The Woodlands temporarily, while the transmission sector’s headquarters was shifted to Jackson, Miss.

Stewart’s commute turned into a three-hour daily ordeal from her home north of Lake Pontchartrain. Green-Brown rode with five others in a carpool every day from Baton Rouge to work in a single-wide customer-service trailer within the damaged area.

“The therapeutic part of it was you got to share your stories,” she said. “We got excited every day when the American Red Cross truck came by with lunch. We got to know the customers very well. Many of the employees in customer service had lost a home or had a family member who lost a home.”

The bankruptcy proceeding eventually allowed Entergy New Orleans to emerge from Chapter 11 in May 2007, clearing its books and benefitting from some inside and outside financial assistance. The New Orleans City Council granted a rate increase that raised customers’ bills about 8 percent. The utility also gained $200 million in Community Development Block Grants and received insurance claim payments totaling about $250 million, which helped keep the rate increase as low as possible, according to Entergy.

Stewart pointed out that Entergy New Orleans focused on reinvesting its new-found funds right back into the electric grid in and around the battered landscape. In addition, Entergy Corp. has spent about $1 billion since 2008 on “hardening” the plants, substations, transmission and distribution assets within its service territory to withstand something like another Katrina.

“After the storm we looked at what we could do to improve the resilience of our system,” Stewart said. “We hardened 25 critical substations across south Louisiana. We now use concrete and steel structures for transmission lines, constructing them to extreme wind-load criteria.

“On the distribution side, we use larger poles now—Class 3 or larger—and selectively use storm guy wires to stabilize them,” she added

Entergy Corp. returned to its headquarters in New Orleans’ central business district about eight months after the hurricane. It needed temporary homes for critical payroll and logistical functions, but no thought was ever given to abandoning the city, these employees say.

Stewart said even the bankruptcy organization did not force it to cut the workforce. The company has about 6,000 direct and indirect employees in the New Orleans area. Many of those are holdovers who chose to stay.

Green-Brown transferred with Entergy to the office in West Monroe, Louisiana, for about a year. She was glad for the time away, she said, giving her perspective on the storm and eventually sharpening her desire to return.

Rosemond also came home to eastern New Orleans, reclaiming the house from the nine feet of water that poured into it on Aug. 29, 2005, after the levees failed.

“To me it was no doubt,” Rosemond said. “I wanted to be here. I wanted to be with my company where I’d worked for almost 30 years, which was going into bankruptcy. I wanted to see the power restored.”

They all did, both to the company and the city it supplied.