Portion of Eversource transmission line to be underground 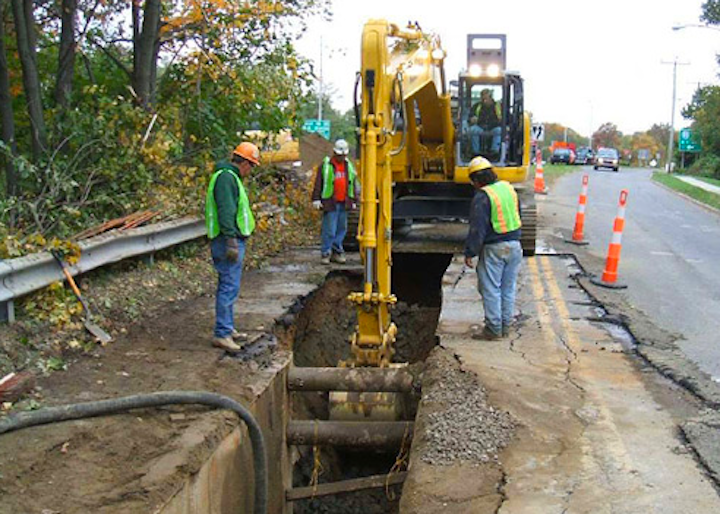 “We have made the decision to scale down the project to 1,000 MW,” Quinlan said. “In so doing, we are changing the cable technology, so the actual line carrying the power from Canada will be a different type of cable. It will be a cable that allows us to underground more of the line.”

He later noted that the project is using “advanced cable technology, so not only does that allow us to underground more, it also allows us to lower the average structure height for the aboveground sections by five to 10 feet, on average.”

According to the project’s website, Northern Pass is a 192-mile transmission line project that will bring 1,000 MW of energy from Hydro-Quebec’s hydroelectric plants in Canada to New Hampshire and to the rest of New England. The project has the potential to deliver up to 1,090 MW of electricity.

To bring that energy to the region, the project will build a new direct current transmission line from the Canadian border to Franklin, N.H., where a converter terminal will be built to convert the electricity from DC to alternating current. From there, the website added, a new AC transmission line will carry the energy to an existing substation in Deerfield, N.H., and into New England’s electric grid.

The project route was designed to address concerns that the company heard from New Hampshire residents about the possible impact the project could have on key scenic areas, according to the website.

“The route today eliminates potential visual impacts in the White Mountain National Forest, the Franconia Notch area, the Rocks Estates area, and along the Appalachian Trail by placing an additional 52 miles of the route underground, for a total of 60 miles underground,” the website said.

“This improved route strikes a balance between avoiding and minimizing potential impacts to scenic landscapes and providing unique economic and clean energy benefits to New Hampshire,” the website said.

Further discussing the project route, the website noted that the proposed line crosses the Canadian border in Pittsburg and heads south into Clarksville, as was previously proposed. The line travels underground in two separate areas of Clarksville and Stewartstown for a total of eight miles. The line then travels overhead into Grafton County where it again goes underground in Bethlehem where the transmission corridor meets Route 302 near Miller Pond.

It travels underground to Route 18 into Sugar Hill and heads underground along that road, as well as portions of Route 116, Route 112 and Route 3 into Bridgewater, where the line returns to overhead. From there, the website added, the line travels to Franklin, where it is converted from DC to AC. The line continues overhead into Deerfield, where it enters the New England electric grid at a substation on Cate Road, the website said.

During the media briefing, Quinlan said, “We are making changes up and down this route to address the local impact” concerns, adding, “These changes make this a far better project for New Hampshire from a view impact perspective.”

As noted on the website, and as Quinlan discussed, the changes are part of the new “Forward New Hampshire Plan,” which beyond additional burial, will deliver more than $3 billion in direct economic benefit to New Hampshire, including 2,400 jobs during construction, $80 million annually in lower energy costs for the state – as well as additional energy costs savings from a power purchase agreement (PPA) for Eversource New Hampshire customers – $30 million in annual tax benefits and a more than $2 billion increase in the state’s economic activity. The project will also create a $200 million “Forward NH Fund,” which will be dedicated to supporting initiatives in tourism, economic development, community investment and clean energy innovations, with an emphasis on North Country opportunities, the website said.

Of the PPA, Quinlan noted that the company is entering into a PPA specifically for New Hampshire customers with Hydro-Quebec, ensuring that 10 percent of the power of the line is used in New Hampshire for the benefit of customers in the state.

Discussing the $200 million fund, Quinlan said that the constituent groups involving business, labor, environmental groups, the North Country groups and municipalities are going to be represented on an advisory board that will help determine where those funds are invested.

He also noted that the project’s environmental benefits from a renewable generation perspective are “unparallel.”