Energy issues such as energy efficiency, renewable energy, cybersecurity, smart grids and infrastructure investment were mentioned higher up in the president's speech than education or immigration 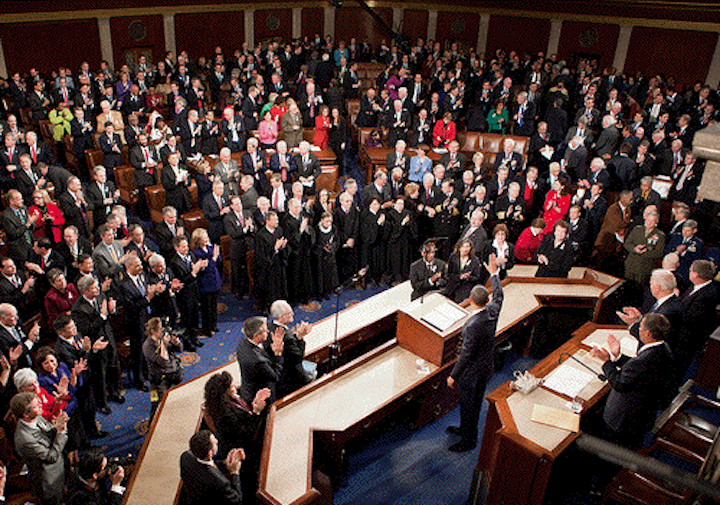 While prominent mentions of immigration reform, gun violence prevention, jobs legislation and the Afghanistan drawdown will likely draw the largest number of headlines, President Barack Obama's talk of energy policy in his 2013 State of the Union address was extensive.

Energy issues such as energy efficiency, renewable energy, cybersecurity, smart grids and infrastructure investment were mentioned higher up in the president's speech than education or immigration.

As he laid out his plan for a second term, Obama said the U.S. has already seen much benefit from investing in renewable energy technologies.

"After years of talking about it, we are finally poised to control our own energy future," Obama said before Congress, referencing the rising share of U.S. power generation that comes from renewable sources, such as wind and solar energy.

"We produce more oil at home than we have in 15 years. We have doubled the distance our cars will go on a gallon of gas, and the amount of renewable energy we generate from sources like wind and solar — with tens of thousands of good, American jobs to show for it," he said. 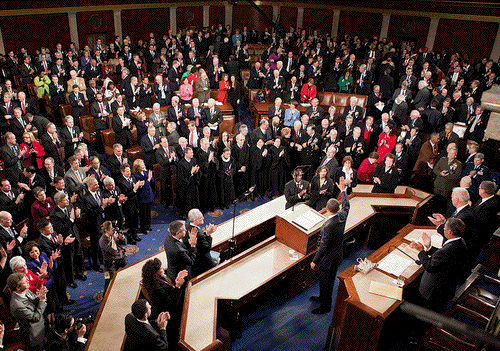 Natural gas, which new extraction technologies have unlocked new supplies of in the U.S., was mentioned at several points throughout the president's speech.

"We produce more natural gas than ever before — and nearly everyone's energy bill is lower because of it. And over the last four years, our emissions of the dangerous carbon pollution that threatens our planet have actually fallen," he said.

The U.S. should continue to take advantage of the natural gas boom in any way it can, he said, adding that environmental protections must still be respected.

"In the meantime, the natural gas boom has led to cleaner power and greater energy independence. That's why my Administration will keep cutting red tape and speeding up new oil and gas permits. But I also want to work with this Congress to encourage the research and technology that helps natural gas burn even cleaner and protects our air and water," he said.

The president also introduced a new program that he called an Energy Security Trust, which he said would drive alternative energy transportation.

"I propose we use some of our oil and gas revenues to fund an Energy Security Trust that will drive new research and technology to shift our cars and trucks off oil for good," he said.

In a part of the speech that drew bipartisan applause, the president called for the country to increase its energy efficiency and waste less power.

"I'm also issuing a new goal for America: let's cut in half the energy wasted by our homes and businesses over the next twenty years. The states with the best ideas to create jobs and lower energy bills by constructing more efficient buildings will receive federal support to help make it happen," he said.

The president also announced a program he called "Fix-it First" that he said would repair the country's aging or obsolete infrastructure. Electric transmission and smart grid technology was specifically mentioned, alongside high-speed rail, roads and bridges, and broadband Internet.

"America's energy sector is just one part of an aging infrastructure badly in need of repair. Ask any CEO where they'd rather locate and hire: a country with deteriorating roads and bridges, or one with high-speed rail and internet; high-tech schools and self-healing power grids," he said.

The president said companies like Siemens America, which has already brought energy jobs to North Carolina, would be encouraged to invest in the U.S. if we upgrade our infrastructure.

As he did previously in his second inaugural address, the president said the country and the world must fight climate change by using resources carefully and cutting harmful emissions.

"But for the sake of our children and our future, we must do more to combat climate change. Yes, it's true that no single event makes a trend. But the fact is, the 12 hottest years on record have all come in the last 15. Heat waves, droughts, wildfires, and floods — all are now more frequent and intense. We can choose to believe that Superstorm Sandy, and the most severe drought in decades, and the worst wildfires some states have ever seen were all just a freak coincidence. Or we can choose to believe in the overwhelming judgment of science — and act before it's too late," he said.

"The good news is, we can make meaningful progress on this issue while driving strong economic growth. I urge this Congress to pursue a bipartisan, market-based solution to climate change, like the one John McCain and Joe Lieberman worked on together a few years ago," he said, referring to a cap-and-trade bill the two senators produced.

"But if Congress won't act soon to protect future generations, I will. I will direct my Cabinet to come up with executive actions we can take, now and in the future, to reduce pollution, prepare our communities for the consequences of climate change, and speed the transition to more sustainable sources of energy," he said.

Specifically mentioning the Department of Energy, Obama said this department would again be called upon to helping create jobs and research new technology.

"So tonight, I'm announcing the launch of three more of these manufacturing hubs, where businesses will partner with the Departments of Defense and Energy to turn regions left behind by globalization into global centers of high-tech jobs. And I ask this Congress to help create a network of fifteen of these hubs and guarantee that the next revolution in manufacturing is Made in America," he said.

In past addresses, the president said he regretted that energy technologies that the U.S. originally developed have gone on to become thriving industries in other countries, such as Chinese-made solar panels or European-made wind turbines. This trend is beginning to reverse, he said.

"Last year, wind energy added nearly half of all new power capacity in America. So let's generate even more. Solar energy gets cheaper by the year — so let's drive costs down even further. As long as countries like China keep going all-in on clean energy, so must we," he said.

Amid mentions of national security issues, the president also brought up cybersecurity and the vulnerability of the power grid's critical assets.

"America must also face the rapidly growing threat from cyber-attacks. We know hackers steal people's identities and infiltrate private e-mail. We know foreign countries and companies swipe our corporate secrets. Now our enemies are also seeking the ability to sabotage our power grid, our financial institutions, and our air traffic control systems. We cannot look back years from now and wonder why we did nothing in the face of real threats to our security and our economy," he said.