Northeast US digs out, fights outages after latest storm

With many schools closed for a second consecutive day Thursday, forecasters tracked the possibility of yet another late-season snowstorm to run up the coast early next week 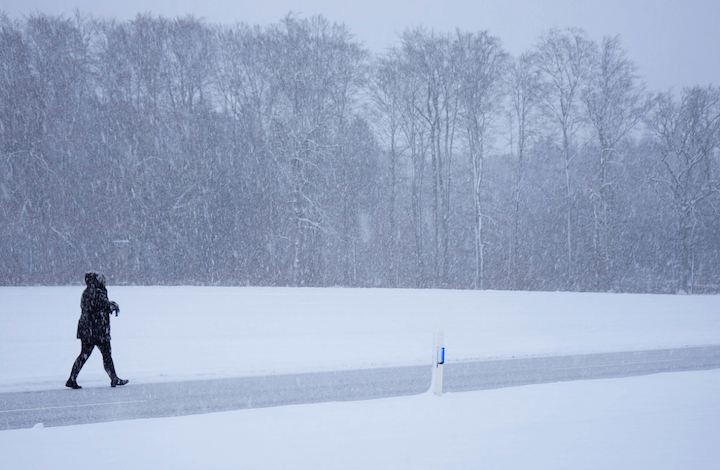 HARTFORD, Conn. (AP) — Residents in the Northeast dug out from as much as 2 feet of wet, heavy snow Thursday, while utilities dealt with downed trees and power lines that snarled traffic and left hundreds of thousands without power after two strong nor'easters in less than a week — all with possibility of another storm in the wings.

With many schools closed for a second consecutive day Thursday, forecasters tracked the possibility of yet another late-season snowstorm to run up the coast early next week.

"The strength of it and how close it comes to the coast will make all the difference. At this point it's too early to say," said Jim Nodchey, a National Weather Service meteorologist. "We're just looking at a chance."

Snow was still falling Thursday in southern Maine, where the storm was expected to move on by midday.

More than 800,000 customers were without power in the Northeast, including some who have been without electricity since last Friday's destructive nor'easter. Thousands of flights across the region were canceled and traveling on the ground was treacherous.

There were multiple storm-related delays on Massachusetts Bay Transportation Authority's commuter rail, light rail and bus lines, and authorities were investigating after a train with more than 100 passengers on board derailed in Wilmington, Massachusetts. Nobody was hurt. The low-speed derailment was under investigation to determine if it was weather related.

In New Hampshire, Interstate 95 in Portsmouth was closed in both directions because of downed power lines.

Members of the Northeastern University women's basketball team pushed their bus back on course Thursday after it was stuck in the snow outside a practice facility in Philadelphia. The Huskies were in the city to compete in the 2018 CAA Women's Basketball Tournament. The team posted a video of the feat on its Twitter account.

Steve Marchillo, a finance director at the University of Connecticut's Hartford branch, said he enjoyed the sight of heavily snow-laden trees on his way into work Thursday but they also made him nervous.

"It looks cool as long as they don't fall down on you and you don't lose power," he said.

The storm was not as severe as the nor'easter that toppled trees, flooded coastal communities and caused more than 2 million power outages from Virginia to Maine last Friday.

It still proved to be a headache for the tens of thousands of customers still in the dark from the earlier storm — and for the crews trying to restore power to them.

Massachusetts was hardest hit by outages, with more than 345,000 without service Thursday and Republican Gov. Charlie Baker closing all non-essential state offices. Republican Maine Gov. Paul LePage also closed state offices and encouraged residents to stay off roads "unless it is an absolute emergency."

In New Jersey, the state's major utilities reported more than 247,000 customers without power a day after the storm.

In North White Plains, New York, 10 people were taken to hospitals with symptoms of carbon monoxide poisoning after running a generator inside a home, police said. All were expected to survive.

In Manchester Township, New Jersey, police said a teacher was struck by lightning while holding an umbrella on bus duty outside a school. The woman felt a tingling sensation but didn't lose consciousness. She was taken to a hospital with minor injuries.