The pylon stands 155 feet tall and weighs just over 27.5 tons 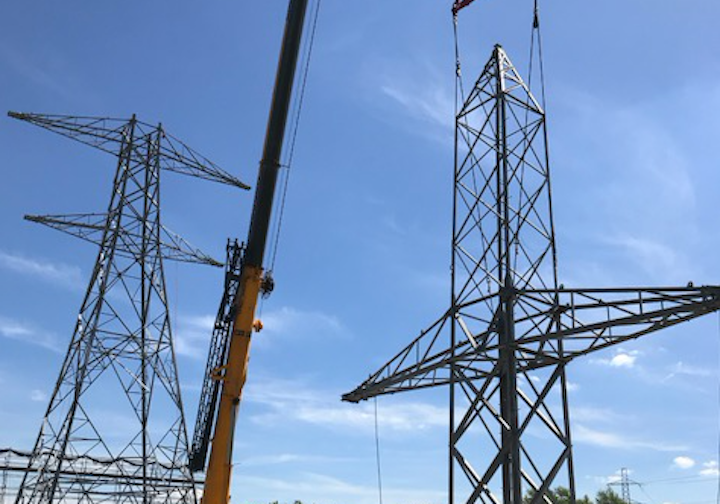 National Grid UK has completed the first of its pylons for a new 400-kV transmission line that will connect electricity flow between the United Kingdom and Continental Europe, the company reported this week.

The nearly 12.5 mile line between Richborough and Canterbury ultimately will connect into the NemoLink electricity link near Bruges in Belgium to the UK. The interconnector will allow the UK to import electricity as a supplement to its power generation needs.

The first pylon has been built at the junction of Broad Oak Road and Vauxhall Road just outside Canterbury. Engineers from Murphy Ethel Joint Venture, used more 5,000 steel parts and 66 bags of bolts to construct it with the aid of a 165-ton crane. The pylon stands 155 feet tall and weighs just over 27.5 tons.

“This is the first step in what is a significant project for Kent and for the UK as a whole,” Graham Dolamore, National Grid project director, said in a statement. “This is the first major new power line to be built in the county since the UK electricity transmission system was built in 1961 and it will play a vital role in helping us supply the electricity needed by homes across the county, the region and beyond.”

Some existing lower-voltage overhead lines will be diverted due to the work, but power will not be interrupted to current supplies for local customers, he added. The pylon work is the first of 60 that will support the line.

In addition to the new line, construction is also taking place at Canterbury North substation and Richborough substation, to install new equipment, upgrade the existing technology and extend the substation buildings, ready for the new connection.