Physical protection of electrical substations is more critical than guarding against copper theft. Recent terrorist attacks on substations and the potential for simultaneous attacks across the US puts the entire country at risk for power interruption. 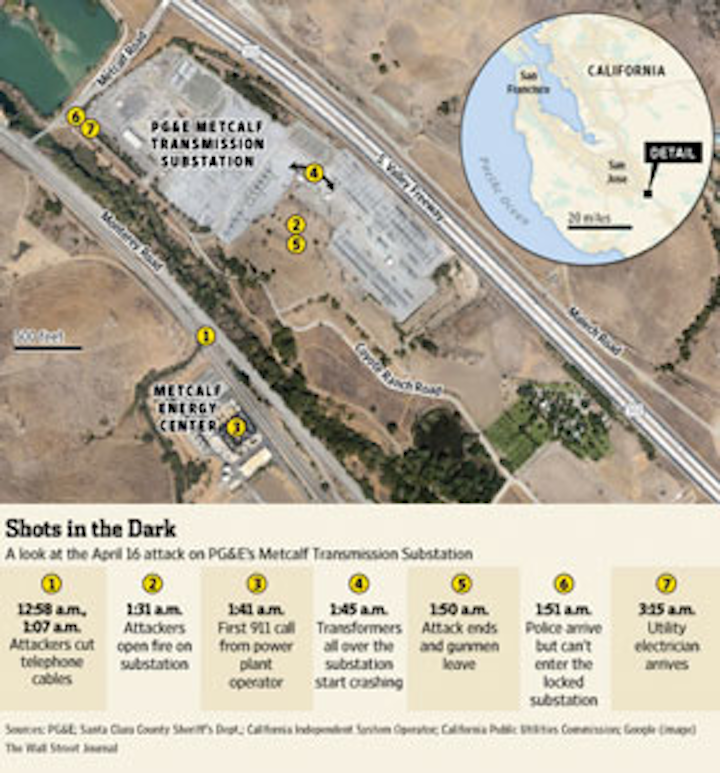 Physical protection of electrical substations is more critical than guarding against copper theft. Recent terrorist attacks on substations and the potential for simultaneous attacks across the US puts the entire country at risk for power interruption. Detection devices such as fence sensors, thermal cameras, microwave and passive infrared (PIR) motion sensors provide some warning against such attacks but are all limited in their ability to detect threats outside the fence line.

For power utility substations, SpotterRF Compact Surveillance Radar (CSR), integrated with pan–tilt–zoom (PTZ) cameras, provides early warning detection and identification of threats inside and outside the fence line. This is achieved at a price point comparable to fence only solutions and is feasible for electrical utilities.

"Snipers opened fire on the substation for 10 minutes before a plant operator heard the sound and called 911. The attack continued for another 10 minutes before the attackers slipped into the night, just before police arrived but not before 17 giant transformers were knocked out."

A recent report from the Federal Energy Regulatory Commission captures the gravity of this and potentially future events such as this:

"Destroy nine interconnection substations and a transformer manufacturer, and the entire United States grid would be down for at least 18 months, probably longer."

Until this attack occurred, physical substation security was focused almost exclusively on fence line detection and security of the control house. This attack revealed a critical weakness in this approach because the attackers never entered the substation, but simply shot at transformers from outside the fence. The attackers, therefore, were never detected by any of the existing security equipment. Only the sparks caused by the fence being repeatedly hit triggered the alarm 10 minutes into the shooting. It is evident that outside-the-fence detection and event recording is required to reliably detect and record an attack on a substation.

The SpotterRF Shield System provides reliable outside-the-fence detection and recording of such events. It is a robotic perimeter security system that features Compact Surveillance Radar (CSR) integrated with a PTZ Camera (either EO/IR or thermal). The two are integrated through NetworkedIO, a powerful integration platform that applies behavioral filters and automatically slews cameras to the target being tracked by the CSRs. NetworkedIO also allows the user to set parameters to alert operators only when there is activity they are concerned about.

Turnkey Shield Systems easily integrate into existing security systems as well as operate as stand alone systems. Shield Systems detect moving people and vehicles over wide areas, cue cameras directly to the intruder, notify an operator of the intrusion in real time, record it and then respond automatically to a threat. In this fashion, Shield provides robotic perimeter surveillance and deterrence.

There are four levels of Shield packages designed for short, medium, long range and mobile applications.

Key capabilities of the Shield include:

The Shield System adds particular value around large remote substations where detection of an intruder prior to entering the perimeter is critical. In the attack previously outlined, fence line detectors or cameras looking down the fence line did not detect the event because the attackers never entered the substation or touched the fence. Outside-the-fence detection is required to defend against this type of attack.

Figure 2 gives an example layout for a substation using four Shield Systems, one in each corner, and two cameras mounted high up in the middle of the substation. Alert zones are configured to alert on any movers that are not on the roads, eliminating alerts on normal road traffic. The cameras are positioned to provide complete coverage of the entire perimeter, cueing off any of the four radars. Each red ellipse shows the coverage area of one CSR. This configuration provides complete outside-the-fence coverage of the perimeter out to a minimum of 328 feet around the entire perimeter and significant coverage inside the fence line.

Figure 3 shows the system diagram for a NetworkedIO device. It is able to network multiple shield systems and cameras together through any type of TCP/IP network back to an operation center or control room.

The cost of a complete system including all four Shield stations is comparable to the cost of purchase and installation of a fiber-based fence detection system for a 3,000-foot perimeter. The Shield System would provide complete detection, tracking, recording and alerting of intruders in and around the substation. Recording would only be triggered by events of interest, significantly reducing the amount of space needed to record and time required to review events.

Shield stations are modular in design, allowing for site-specific layouts and configurations. Some of the common devices tied to the Shield are:

One electrical utility company that used the Shield System was in a yard surrounded by a chain link fence. The yard, shown in Figure 3, housed assets and was surrounded by a fence with fiber based vibration detection installed on it. The fiber alarm was frequently set off by trains passing by on the nearby tracks, resulting in dozens of daily nuisance alarms.

To resolve the issue, a SpotterRF C40 was mounted inside the plant fence line, pointed out over the yard, and a SpotterRF NetworkedIO CC8A was installed on the same network in a different location. Two alert zones were drawn, one covering the yard with the other covering the interior of the plant, and filters were applied to minimize nuisance alarms.

The result was that no more alerts were caused by the trains, and the utility was able to track intruder movements throughout the yard with cameras cued directly to their locations. In addition, they had interior coverage to their plant that they did not have with the fiber on the fence.

The advantage of the Shield System for this customer was a perimeter security solution that was deployed in a few hours, required no trenching, eliminated nuisance alarms caused by passing trains, and coverage provided inside and outside the fence line from all-weather threat detection with automatic camera cueing.

In the following section, Compact Surveillance Radar is compared against different sensor technologies.

Shot Detection is a technology that uses an array of microphones that are used to detect the firing of a weapon. Some can determine the direction and spot of origin of the shot. While this type of technology is effective in detecting shots, it is unable to detect any potential threats prior to actual shots being fired. With the Metcalf incident previously mentioned, there were signs the attackers had been to the site prior to the actual attack, planning what they would do. Shot detection has no possibility of detecting or deterring this type of behavior. There are other threats to a substation, including theft that is not detected by shot detection. The best way to detect a threat outside the perimeter prior to shots being fired is to use a wide area surveillance technology that is not affected by lighting, temperature, fog, rain or snow. The only type of technology that meets that requirement is radar.

Using CSR in and around wide areas can reduce system and installation costs as well as operational costs by as much as 88 percent over purely camera-based detection systems. For smaller, well lit areas, CCTV camera systems with video analytics have proven to be effective. Using cameras to detect threats in wide open outdoor areas, however, has proven to be problematic because cameras (including thermal) are severely affected by environmental conditions and the field of view is limited when increased range is needed. A technical note on thermal imaging from FLIR describes the effective range of thermal cameras: "Although thermal imaging cameras can see through total darkness, light fog, light rain and snow, the distance they can see is affected by these atmospheric conditions… Rain and fog can severely limit the range of thermal imaging systems due to scattering of light off of droplets of water…"

For automated detection using video analytic systems, 15 pixels or greater is needed for better than 80 percent detection rates instead of 1.5 pixels on target that is typically required for the human eye to detect a target. Fifteen pixels on target can be difficult to achieve at ranges farther than 328 feet because of the reduction of the field of view (FOV) of the camera when zooming. This has been described as the soda straw effect. As you zoom in, your FOV narrows, leaving the operator unaware of what is happening outside that small and narrow area. Because of this and other limitations of thermal imaging through changing environmental conditions, even FLIR, a leading manufacturer of thermal cameras, states on their website, "A more effective and strategic solution combines ground-based radars, pan and tilt imagers (visible CCD and thermal) and software technology to automate many of the critical challenges that the security guard faces."

In addition, the following limitations must also be considered before choosing analytics:

Both fence sensors and break beam sensors provide the same basic functionality of point detection on touching or "breaking" the line. These systems work well for point detection in and around perimeters but have a couple of drawbacks compared to radar based security:

Electrical substation security is critical to the security of any nation. As we have learned from recent terrorist attacks on substations, to effectively secure a substation requires more than detection of unauthorized entry. It requires detection and protection beyond fences. Proven in military and critical infrastructure environments by companies such as Exxon, Honeywell and SAIC, the SpotterRF Shield System provides a cost-effective means of providing early warning in remote medium to large scale substations.

For more information about the SpotterRF Shield System, please contact a SpotterRF Field Application Engineer by phone at (801) 742-5849 or by email at sales@spotterrf.com.