Selecting the proper friction is vital for maintaining the performance, service life, and safe operation of drum brakes, especially in severe-duty applications. Familiarity with proven industry standards, as well as the science and reasons behind friction design and recommendations will keep trucks on the road and operating safely. 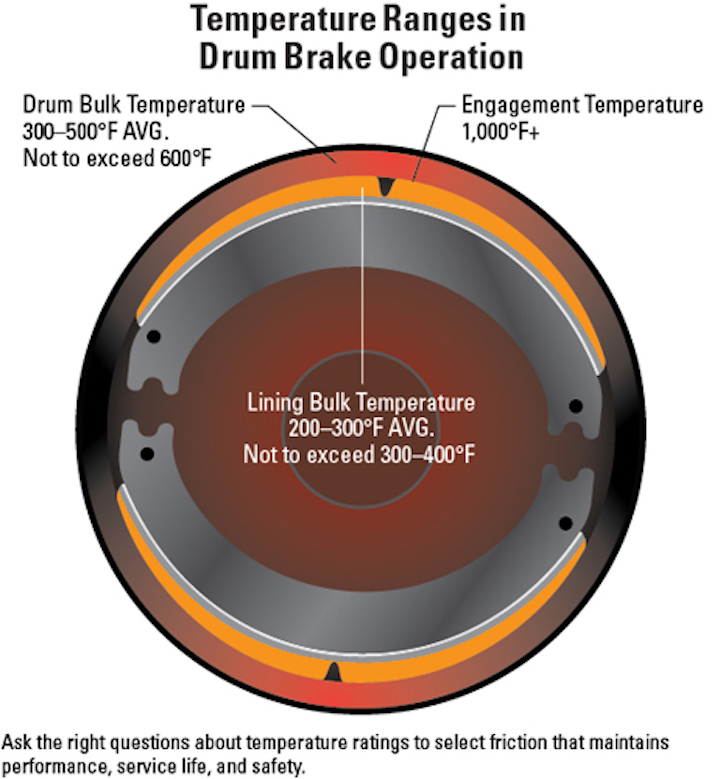 Utility vehicle fleets and drivers are no strangers to downhill brake applications or heavy stop-and-go usage, so it’s no surprise that many utility trucks are equipped with today’s high-performance and severe-duty drum brakes. The more demanding the condition, the more heat these brakes generate — and when it comes to brakes, heat is the enemy of braking performance.

In brakes engineered for shorter stopping distances and regulatory compliance, heat generation and its potential effects are strongly tied to the friction material that provides stopping power. That means equipping and relining with the right brake friction is integral to maintaining vehicle safety and performance.

To better understand the connection between temperature and brake friction, it helps to look at some of the science behind heat transfer in braking, temperature ratings, and other factors that should be considered when choosing friction. 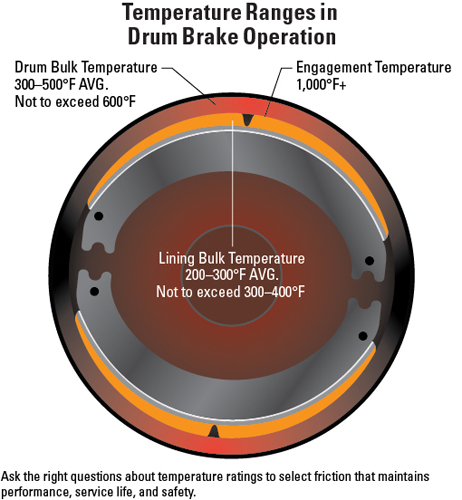 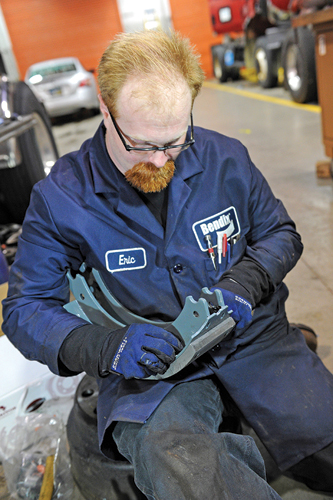 Many utility trucks are equipped with today’s high-performance and severe-duty drum brakes.

These three temperature points represent the full temperature range experienced by the major components within drum brake applications. It’s important to establish a point of reference when discussing friction and temperature. A brake system has a wide variety of components — each with unique thermal properties — that make it nearly impossible to identify one temperature as the most critical for the entire system.

Understanding the brake system’s temperature during a brake application begins at the engagement point, where temperatures can briefly surpass 1,000°F. The large amount of heat that is generated at engagement begins to dissipate as heat is transferred into the drum, with the drum acting as a heat sink. Without that dissipation, the cast-iron drum would be red hot, creating an extreme environment difficult for any type of friction material to withstand. 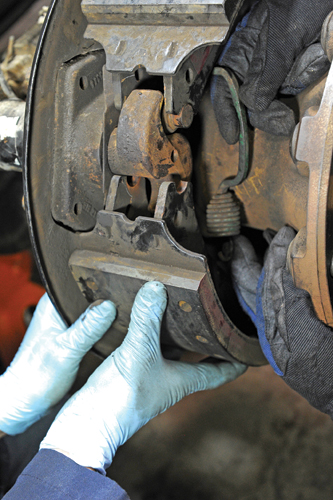 The goal of brake and friction design is to maintain the lowest possible braking temperatures.

As stops get more frequent, heat continues to transfer into the drum, raising the drum bulk and lining bulk temperatures. These bulk temperatures can reach up to 600°F in drums and approximately 300–400°F in linings.

Braking temperatures can increase in some conditions such as severe-duty use, in applications requiring more frequent or harder stops, or in situations in which cooling air to the brake is restricted. Sometimes these two factors go hand in hand, where more frequent stops tend to mean less air flow or cooling. These severe-duty applications may require a higher-grade friction to better withstand the increased levels of heat.

The goal of brake and friction design is to maintain the lowest possible braking temperatures. Reduced temperatures lower the risk of loss of stopping power, known as brake fade, while also extending the life of your brake friction.

It’s important to remember that the elevated temperatures at the engagement point of the friction and drum dissipate almost immediately. Although it may be acceptable to measure 1,000°F on the drum surface during engagement, prolonged exposure at this temperature will lead to the failure of any NAO (non-asbestos organic) friction.

Placing too much emphasis on keeping brake temperatures low, however, can lead to a misplaced reliance on brake-lining temperature ratings, particularly those that claim ratings of 950–1,000°F. 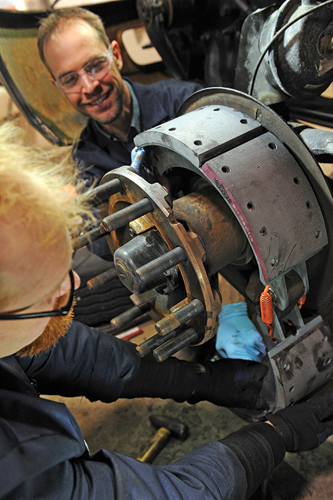 Equipping and relining with the right brake friction is integral to maintaining vehicle safety and performance.

The most valuable and accepted industry tests in the OE and aftermarket friction certification process are the FMVSS 121 and the Society of Automotive Engineers (SAE) J2115 tests, used by Bendix and other leading brake and friction suppliers. These two tests — which all commercial vehicle drum brake friction materials must adhere to — establish the following drum bulk temperature guidelines:

The results of both the FMVSS 121 and SAE J2115 tests should be requested from any potential supplier when considering friction for severe-duty applications — even if that supplier has provided “temperature ratings” far exceeding normal system operating temperatures. Regarding specific temperature claims, ask whether they’re measuring drum bulk or engagement heat, and where it’s being measured.

Selecting the proper friction is vital for maintaining the performance, service life, and safe operation of drum brakes, especially in severe-duty applications. Familiarity with proven industry standards, as well as the science and reasons behind friction design and recommendations, goes a long way toward making the right choices to meet fleets’ needs and keep trucks on the road and operating safely. UP

the Author: Keith McComsey is director of wheel-end marketing and customer solutions at Bendix Spicer Foundation Brake LLC, a joint venture of Bendix Commercial Vehicle Systems LLC and Dana Commercial Vehicle Products LLC formed in July 2004. He has been involved in the commercial trucking industry for 25 years in engineering and product management roles at both the truck OE and supplier levels. He works closely with customers regarding current and future Bendix brake technologies. For more information, visit foundationbrakes.com.

Welcome to the February 2019 edition of Utility Products. Topics this month include: safety clothing; vehicles and accessories; asset tracking and management; safety and security; and much more.
Feb 1st, 2019
Vehicles & Accessories

It’s important for technicians to have the tools they need on their trucks, but carrying extra equipment can easily make a truck overweight and less efficient.
Nov 1st, 2018