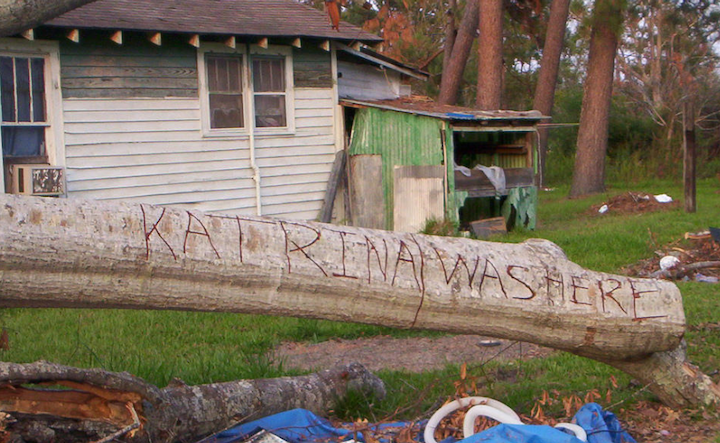 In the midst of this tragedy, many utilities, including Duke Energy and Progress Energy (now Duke Energy Carolinas and Duke Energy Progress after their merger in 2012), sent assistance.

The companies sent a combined total of about 1,800 workers from North Carolina and South Carolina as well as Florida.

From the beginning, officials said it was apparent this outage restoration would be like no other that personnel had ever experienced. Louisiana's electrical system was so severely damaged that it needed to be rebuilt, rather than repaired.

Washington Parish Director Of Homeland Security And Emergency Preparedness Thomas Thiebaud recalled the damage in his area. "We had so many power lines totally down. You had first responders that had to move about and they actually had to cut lines to clear the roadway," he said.

Because of the extensive devastation in the area, crews were sent as self-contained units to assist Entergy and Cleco Corp. (the host utilities). System storm response teams were mobilized in Charlotte and Florida. They were a lifeline in providing the strike teams things that they could not get in Louisiana, such as washbasins, tents and sleeping bag.

Self-contained strike teams include not only the crewmembers who restore power but also the support personnel responsible for all of the crews' logistical needs. Staging and logistics storm teams met those needs, including housing, food, transportation, fuel, laundry services, medical services and shower and restroom facilities.

"Other than a spot to house their people, they said, 'We have what we need,' and that's really a relief to the emergency operations center," Thiebaud said. "It takes one more burden off your shoulders. They're there to help. It was just invaluable."

"Electrical power, we're so dependent on it. It drives everything. It's everything that you're used to," said Dawson Primes, Tangipahoa Parish Emergency services and Homeland Security. "It means so much for the community because that's when they see, okay, we're going to be okay. It's really the key to recovery."

Here are some of the stories from those who worked to restore power in Louisiana:

Mason Hattaway, a distribution service technician from South Carolina, rode to Bogalusa, La., on a bus Duke Energy had chartered after storm. He slept on an air mattress in the library at Bogalusa High School, along with others who had come to help restore power. Hattaway's team drove as far as 75 miles away from home base each day to help restore electricity to areas that were devastated – and nearly simply wiped off the map.

"We worked all over the place," he said. "One thing I'll always remember is the poles. The poles were so fresh that the creosote (used as a preservative) dripped off like water from a wet sponge." They were bringing them straight from the lumber mills for us to work with."

In his 23 years of work before Hurricane Katrina, C&M Technical Skills Specialist Edward Thompson had seen his share of storm-related destruction. Nothing compared to what he saw as part of a power restoration group traveling from Traveler's Rest, South Carolina to post-Katrina Louisiana.

"They told us it was going to be bad," he said. "I'd never been on a storm restoration effort before that required us to update our tetanus shot."

What he saw exceeded his imagination.

"You could see pole after pole after pole just broken and wires down," he said. "I think everybody was just in shock and awe of the devastation that we were witnessing."

"The community, you could tell it wasn't the privileged," Thompson said. "They were working-class people and you felt for them and what they had to go through. When you're out working and you see the places where they would have the big ice trucks come and these long lines of residents just to get ice and bottled water, you feel for them."

"You'd see coffins floating up in the graveyards. Also the Xs, the red Xs on homes where there were fatalities. You saw that and knew what that meant then. All the homeless. They'd lost their homes and they were everywhere."

"What stands out is trying to help the residents out. Every time we got somebody's lights on they cheered and they were so excited. They really appreciated what we did. But what really sticks out in my mind is we had to come back because one [a storm] hit in Wilmington. We weren't finished, but we had to come back."

Rick Jiran was a public relations liaison between Duke and the media in the Carolinas when Katrina struck. He traveled to Louisiana to help inform Duke customers about what was happening and offer communication assistance to the local utilities. As soon as he drove into the state, he got a sense of the devastation.

"There was no gas to get. No money to get. No stores to shop in," he said. "It was almost like one of those cheesy sci-fi movie-of-the-week kind of moments. We were going into towns where nothing was happening. It was very eerie."

When a local store was set to reopen, Jiran recalled an encounter with a mother of two walking down the street. She was miles away from the store but she'd heard a rumor about it reopening. The wheel had fallen off her stroller, and the mother needed supplies for her children.

For the first two nights, the crew had no accommodations, so they slept in their vehicles. After that, the staging and logistics crew came to the rescue, hooking up electricity, adding air- conditioning and creating makeshift showers.

"What touched me was how our employees reached out to the local citizens who had lost so much," Spilman said. "From simple acts of kindness, such as giving away their lunches to collecting funds for two families who were essentially homeless, employees showed genuine concern for others. The last night in town, one of the families, in tears and with their children, visited our staging site to personally thank us for caring enough to share."

Getting to Louisiana was problematic enough for Sameer Baker and the Florida staging and logistics employees traveling to aid the power restoration teams in Louisiana. Road signs were washed or blown away. They saw boats on trees, barges on land and shipyards in disarray.

So, when they arrived and found less-than-ideal accommodations, Sameer Baker and his colleagues devised a creative contraption that allowed the crews one minor comfort that turned into a major discussion point.

The crews had been using bottled water to clean up at the end of the workday. After locating a water source, the staging and logistics team developed the idea of constructing hard-piped showers plumbed with PVC pipe. Shower nozzles were made out of PVC caps and tarps provided privacy. They found pallets to use for shower floors.

"When the guys showed up, they just loved it," Baker said. "We had showers; it wasn't hot and cold water, but we had showers."

The next day, they worked with the local utility to use two large, discarded water heaters to run hot and cold water.

"Everyone was ecstatic," he said. "Morale got a lot better. It became like our little town."

Senior Communications Consultant Heather Danenhower was the lead spokesperson for Marion County Fire Rescue, the second largest fire department north of Orlando, Fla. when Katrina hit the Gulf Coast. She was part of a three-person team of public information officers from the Florida State Emergency Response Team. The Jackson County, Miss. government needed to re-establish its public information office, which was eight feet under water during the height of the storm.

"We worked 16-hour days, slept on an air mattress in a classroom at a local school, bathed outdoors in portable showers, only had access to Porta Potties, ate all meals from portable kitchens and used lots of hand sanitizer," she said.

Ken Flanagan, the county's public information officer at the time said he'd been hand-writing news releases on loose-leaf paper and making copies before the team arrived. He called Danenhower "an absolute godsend."

"I used the model she gave me for public information for the next few months," he added. "Her insights and training were absolutely a difference maker for me and all of Jackson County."

After Hurricane Katrina, John Perkins with Duke Energy's pipeline engineering and drafting in Cincinnati volunteered a week of his year for six years to help rebuild.

"I went with an organization named Give Back Cincinnati," he said. The organization's first trip occurred on the one-year anniversary of Hurricane Katrina. They brought about 45 volunteers. Perkin's first year was two years after Katrina hit.

"We started building in Musician's Village and then spread to other neighborhoods," he said.