In his fourth inaugural speech, Brown called for California to increase renewable energy use to 50 percent in the next 15 years 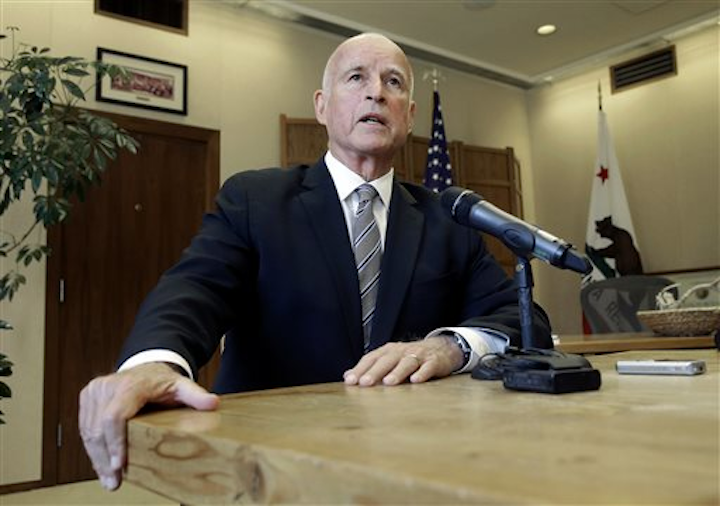 SACRAMENTO, Calif. (AP) — As he was sworn in for a record fourth term, Gov. Jerry Brown charted a new goal on Monday for California in its fight against climate change, challenging the nation's most populous state to increase renewable energy use to 50 percent in the next 15 years.

Brown, a Democrat, specifically called for the state to increase renewable electricity sources, reduce petroleum use in vehicles, double the energy efficiency of existing buildings and make heating fuels cleaner by 2030.

California already is known as a leader in far-reaching environmental laws, but Brown said existing efforts were not enough.

The current state goal calls for 33 percent of energy use to come from renewable sources by 2020. As of last year, nearly 25 percent of California's retail electricity came from renewable energy, not including hydroelectric dams, the state energy commission said. 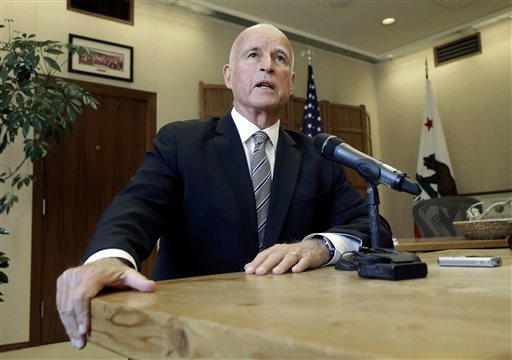 "We must demonstrate that reducing carbon is compatible with an abundant economy and human well-being," Brown said during his inauguration speech. "So far, we have been able to do that."

Former Democratic Gov. Gray Davis, who attended the ceremony, called Brown a visionary who knows how to balance the books. He praised the environmental goals and said Brown likely based the targets on achievable science.

"Even if the rhetoric is slightly ahead of reality, he's always believed that our reach should exceed our grasp," Davis said.

At 76, Brown is the state's longest-serving and the nation's oldest governor. He served from 1975 to 1983 before term limits were implemented and returned for his third term in 2011. He defeated Republican challenger Neel Kashkari in a landslide re-election victory in November.

Since his return as governor, Brown has been credited with helping stabilize state finances. California's general fund spending has grown 25 percent in the past four years, fueled by a statewide economic recovery and the passage of a temporary tax increase.

Brown told the audience at his inauguration in the Assembly chamber that California is at a crossroads for keeping its future golden. He explained that he wants to reduce methane, black carbon and other pollutants as well as manage farms, forests and wetlands to absorb more carbon dioxide.

"All of this is a very tall order," he said. "It means that we continue to transform our electrical grid, our transportation system and even our communities."

Brown recalled his father's first inauguration in 1959 and said many issues that Gov. Pat Brown raised haven't gone away, including discrimination; quality of education and the challenge of recruiting and training teachers; and a realistic water program.

Brown's wife, Anne Gust Brown, introduced her husband at the inauguration, saying his expansive mind and committed heart make him an ideal leader.

"He's someone that we know will enthusiastically and creatively forge a new and bold future for us," she said. "And yet, he will do so grounded enough in wisdom of the past that we won't drive off a cliff."

After the ceremony, the two shared a plate of hot dogs at a celebration hosted by labor outside the building.

During his speech, Brown strengthened his push for a $68 billion high-speed rail project even though it remains controversial. The project faces a blackout from the Republican-dominated House of Representatives, but Brown has secured a source of ongoing state funds from the state's cap-and-trade pollution fees.

Brown pledged to fight a vote by the University of California Board of Regents for tuition increases of as much as 5 percent during each of the next five years unless the state approves more money for the 10-campus system.

"I will not make the students of California the default financiers of our colleges and universities," he said.

Brown made no mention of one of his showcase proposals, a plan to run two giant tunnels under Central California's San Joaquin Delta to ferry water south to densely populated cities such as Los Angeles.

Assembly Minority Leader Kristin Olsen, R-Modesto, said she was disappointed that in his fifth year as governor, Brown had not yet put forward a plan to spur economic growth in California or to ensure schools are preparing students for a 21st century economy.

Assembly Speaker Toni Atkins said majority Democrats would like to see Brown add funding for social services, a comment that appeared to set up some budget friction in the coming months with members of his own party.

Brown indicated he will continue to focus on paying down billions of dollars in debt that was accrued during the recession and depositing money into the state's newly reinforced rainy day fund.

"Not all Californians have come back from the recession," Atkins said after Brown's speech.