Many of the outages were brief, but some were longer and forced evacuations 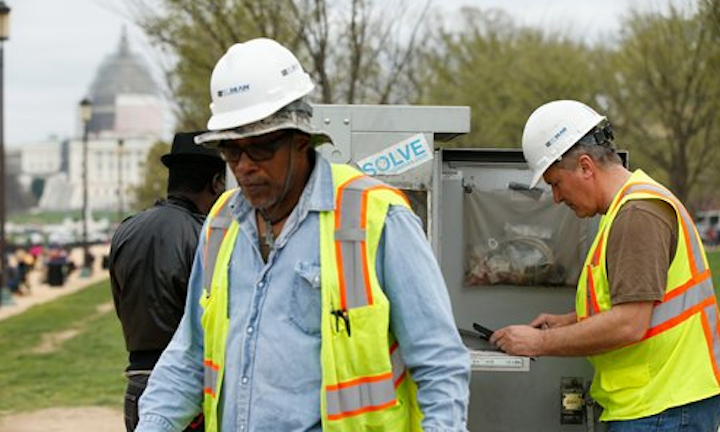 WASHINGTON (AP) — Widespread power outages affected the White House, the Capitol, museums, train stations and other sites across Washington and its suburbs Tuesday — all because of an explosion at a power plant in the adjoining state of Maryland, an official said.

Many of the outages were brief, but some were longer and forced evacuations.

At the White House, backup generators kicked on when the power went out, so the interruption lasted only a few seconds. The complex quickly went back onto regular power. Electricity in the press briefing room dipped around lunchtime, briefly darkening cubicles and blackening TV screens.

Power also went out at the State Department during the daily press briefing, forcing spokeswoman Marie Harf to finish her comments in the dark.

Power in the U.S. Capitol building twice shut down briefly, then came back on by way of a generator.

Some traffic lights were out, and Metro, the city's public transport operator, said 14 of its 91 public transit stations were affected. Power to the trains remained on and trains were moving system-wide Metro spokesman Dan Stessel said, but the affected stations were on emergency power, with dimmer lighting and nonworking elevators and escalators.

University of Maryland officials said their entire campus was affected.

Some Smithsonian museums were affected. The National Air and Space Museum, the National Museum of the American Indian, the National Portrait Gallery, Smithsonian American Art Museum and the Anacostia Community Museum were evacuated and closed to the public, a spokeswoman said.

Jenni Swan, who was visiting from Savannah, Georgia, with her husband and two children, said they were eating in the atrium of the Air and Space Museum around 1 p.m. when security officers said the building was being evacuated. Almost an hour later, they were not yet let back in.

"Honestly I think my kids are excited because of all the fire trucks and people leaving the building quickly," she said. "I think Daddy's a little annoyed."

D.C. Department of Homeland Security and Emergency Management spokeswoman Robyn Johnson cited the explosion at the power plant in Charles County, which is run by the Southern Maryland Electric Cooperative.

About 8,000 customers in Washington were affected, Johnson said.

Utility company Pepco said it was investigating. Spokesman Sean Kelly said he didn't have details about locations or how many customers were affected overall.