Chris Christie, Jeb Bush, Carly Fiorina, Ben Carson and other candidates sound off on energy policy at an Oklahoma gathering of Republicans 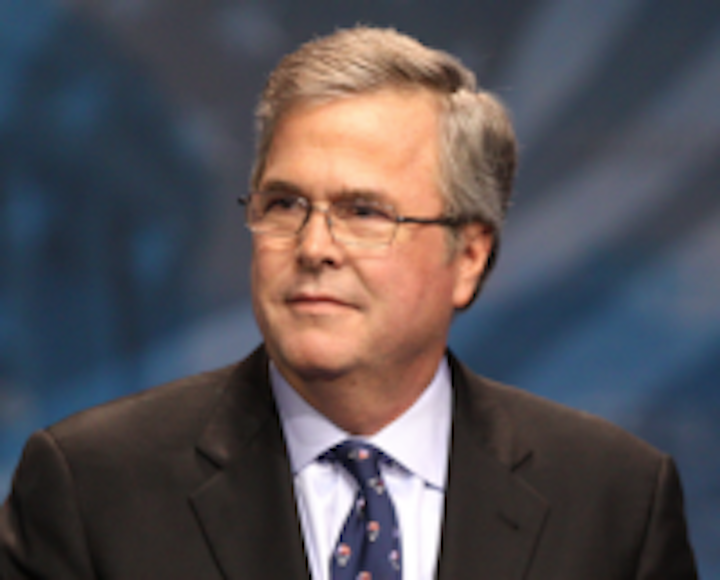 More than a year out from the 2016 U.S. presidential election, more than a dozen Republican hopefuls reached out to the base May 21-23 during the Southern Republican Leadership Conference (SRLC) in Oklahoma City, the self-proclaimed “Energy Capital of America."

Because I live in Tulsa—which is the former “Oil Capital of the World”—I drove 100 turnpike miles to see whether any of the candidates had more than preliminary sound bites on energy policy.

Kentucky Sen. Rand Paul, a 2016 presidential candidate who was not scheduled to appear at the SRLC, derailed planned appearances by Republican Sens. Ted Cruz of Texas, Marco Rubio of Florida and Lindsey Graham of South Carolina with his 10-hour congressional filibuster on National Security Agency surveillance tactics.

Cruz, Rubio and Graham addressed the SRLC audience via video instead. Cruz, who was booked to keynote the event’s sold-out $100-a-ticket gala fundraiser on Friday, sent a proxy: his father, Raphael Cruz. Dr. Ben Carson, the famed neurosurgeon and 2008 Presidential Medal of Freedom recipient, anchored the evening.

Cruz, Rubio and Graham made only minor mentions on energy policy, likely because their appearances were brief tapings from Washington, D.C. Louisiana Gov. Bobby Jindal, although appearing in person, focused on national security and religious freedom rather than energy policy. During my two days in Oklahoma City, the following speakers made noteworthy comments related to energy, power, security and jobs.

“He says we should have ‘all of the above,’ but he doesn’t believe it,’” Christie said.

Such an energy policy is not only bad for the U.S. economy, but it’s bad for the rest of the world, he said. If the U.S. would work with domestic energy companies and those in Canada and Mexico, he said, Europe could rely on a North American energy supply instead of its current supply from Russia.

Christie also said the U.S. needs to partner with its neighbors; not fight them as it’s doing on the Keystone Pipeline. That, he said, would lead to a more peaceful and stable world.

“The rest of the world wants America to lead,” Christie said. “That does not mean being the world’s policeman.”

Former Florida Gov. Jeb Bush said the U.S. needs to change how it regulates and taxes. The country also needs to fix its energy policy, he said.

Pulling back government regulations and taxes, he said, would propel the growth rate to 4 percent from its current 2 percent. Bush called the current growth rate the worst economic recovery in U.S. history, and he blamed big government.

“We can’t have a government that we can’t afford,” he said.

“There is a path out of the mess we have in Washington, D.C. It requires two things: Republican principles and leadership.”

Bush said it is the responsibility of the U.S. to “create a safe and secure world.”

“Leading from behind is not a foreign policy,” he said. “Our enemies need to twitch a little bit.”

Under current U.S. policies, Bush said, “The whole world wonders where the United States is.”

Former HP Chairwoman and CEO Carly Fiorina echoed a familiar Republican cheer: Government has gotten so large, so costly, so complex, so inept and so corrupt that the potential of the people is being crushed by the weight of the government.

Fiorina said that when she was CEO of a $90 billion firm, she could hire big lobbyists. Small U.S. businesses, however, can’t handle the weight.

“We are now destroying more businesses than we are creating,” she said. “Why does that matter? Because most Americans get their start the way I did.”

She said small business drives the U.S., but it’s being overtaxed in many ways.

“The truth is we need to talk about radical simplification of that tax code.”

Fiorina said government is “tangling peoples’ lives up in webs of dependence.”

She gave Dodd-Frank as an example, where instead of the intended reform, the result is one new big bureaucracy: five banks that are too big to fail, and 3,000 small banks that have gone out of business.

Fiorina swung at Republicans and Democrats alike. Every government agency has gotten bigger during the past 40 years under both parties, she said.

“Hundreds and hundreds of billions of dollars of weight, crushing this nation, and nothing happens. Why are we settling for this?” she said.

She said the world is a dangerous place when the U.S. is not leading. Fiorina said the first day of a Fiorina presidency would involve two phone calls.

“First thing, call Bibi Netanyahu,” she said. “My No. 2 would be to the supreme leader of Iran—and he might not take the phone call.”

Fiorina also said she often gets questions about how a woman’s hormones might affect her decisions as president.

“Can you think of a single instance in which a man’s judgment was clouded by his hormones?” she said. “And in the Oval Office?”

Another thing Fiorina said she hears is that Hillary Clinton cannot be elected president because she is a woman.

“She cannot be president of the United States because she is untrustworthy,” Fiorina said.

“I personally don’t have any ties with those people,” Carson said.

Like several Republican candidates, Carson said one of his goals is to shrink the federal government. He suggested attrition through the retirements of thousands of government employees each year.

“Just don’t replace them,” Carson said. “Do that for about four or five years.”

He said most issues are not political but are pro- and anti-American issues.

For example, he said, the U.S. needs to be able to export its domestic energy.

“Our oil, our natural gas—we have these crazy exportation limits from the 70s. Get rid of those,” Carson said. “We can use our economic power, our brain power, as well as our military power.”

“Our friends need to know we are their friends, and our enemies need to fear us. Right now they’re just thumbing their noses at us,” he said. “We can do this.”

The SRLC also included several panels on energy policy that included speakers who are not running for president. The following are notable conversations from those sessions.

Oklahoma Attorney General Scott Pruitt said states do a better job of balancing environmental and economic factors than the federal government does.

He said if the EPA finalizes its rule, “We’re going to sue.”

“When I served as secretary of energy in Oklahoma, I wrote the first energy policy for the state. I was for ‘all of the above,’” he said.

Sullivan also ran in the 2006 GOP primary for Oklahoma governor.

“So leave the states alone, get out of the way and let us solve the problem,” Sullivan said.

Federal employees dealing with the states don’t understand the energy terminology, and the states end up having to do overkill, Sullivan said.

He said the federal government is trying to hurt coal in every way possible while it’s giving subsidies to renewables. He called Obama’s “all-of-the-above” energy policy rhetoric.

“The biggest problem is something that the EPA has misnamed the Clean Power Plan,” Rivkin said. “It’s really the no power plan.”

Rivkin explained that the states remain dominant in regulating electricity, but the EPA for the first time is misconstruing the Clean Air Act to change the generation mix to reduce by 30 percent the carbon intensity. The main target is coal.

“They do it so blatantly,” he said.

“The state and local governments are far more competent,” he said.

He further explained to potential Republican primary voters that states are responsible for the generation and distribution of electricity, and the typical business model relies on the least-cost dispatch. The EPA, he said, wants to disrupt all that equilibrium and force the retirement of 30 percent of coal plants. And coal, he said, is responsible for 40 percent of capacity.

“Once that happens, you gravely disrupt the grid. The very fact that’s it’s been proposed has effects,” Rivkin said. “It’s tied up the capital.”

Constitutional law attorney Tristan Duncan, of Shook Hardy and Bacon, said the EPA’s rule is based on section 111d: It explicitly says that if the EPA has already regulated a plant under a different law, it cannot double regulate for burdensome costs, she said.

“But it doesn’t stop there.”

“We believe the EPA has multiple problems, both at the statutory and constitutional level,” she said.

And that confuses voters. When the federal government creates policies and makes states implement them, people don’t know who is behind the policies that stifle jobs, Duncan said. It makes local and state politicians and regulators suffer at the ballot box, she said.

Traditionally, she said, the EPA has regulated emissions at the plant, or “inside the fence.”

That’s not the case now, when the EPA wants to regulate outside the fence, Duncan said.

West Virginia Attorney General Patrick Morrisey has led more than a dozen states in a lawsuit against the proposed rules in the Clean Power Plan.

“Let’s be clear,” he said. “The Clean Power Plan is a clear power grab.”

Morrisey’s state is the second-largest coal producer in the U.S. He said there are three main effects of the Clean Power Plan: lost jobs, higher electricity prices, diminished reliability and wrongful rule of law.

Morrisey likened the legislation to regulating from plant to plot, which is your house. The EPA’s claim, he said, is analogous to regulating automobiles—it would be like forcing people to ride the bus or to buy electric vehicles.

He said when the EPA and Obama announce the decision this summer, massive changes will become apparent:

1. States will have sweeping new laws.

2. Huge questions will be asked about federal and state government roles.

3. The federal government will be allowed to reach down and affect consumer demand for energy.

“I don’t think this administration thinks there are any limits on its authority,” Morrisey said.

The SRLC ended with a 2016 Presidential Straw Poll. Thirteen possible presidential contenders were represented on the main stage of the event, as well as several other governors, congressional leaders and other Republicans.

One of the first straw polls of the 2016 cycle, the SRLC straw poll is an indicator of Southern primary voter support.

Some 1,500 eligible voters from more than 25 states attended the SRLC, with 958 having voted in the straw poll. Voting was conducted on-site and online only by registered attendees who physically attended the conference.

Oklahomans, the largest voting block at the conference, gave Walker the plurality of their votes. Carson edged out Walker with Texas and Arkansas voters, providing him with a win in the straw poll.

A complete copy of the poll results is available at http://www.srlc.gop.