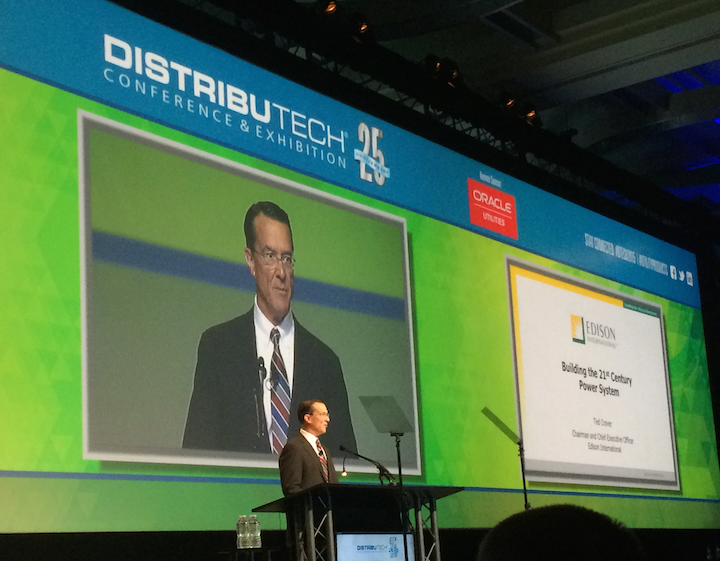 Leveraging technology to deliver value to utility customers was a common thread throughout comments delivered at the DistribuTECH Conference and Exhibition Keynote Address.

Martin said this moment is actually one of the most exciting moments in energy history.

“Literally a whole new world is opening up in front of us. This is the age of discovery for our energy industry, and I would submit, for our country,” he said. “There will be more change in the way we use electricity in the next 10 years as there has been in the past 100.”

All of us have a responsibility to dispel the myth that our industry is resistant to change, he said.

Over the last few decades, the U.S. has embarked upon a series of new rules to clean up the environment and foster sustainable energy, he said, adding that in many ways, California is at the forefront of this movement.

“Our customers are installing more rooftop solar than ever before,” he said.

To help promote solar adoption, SDG&E came up with an online fast-track process that can provide a same-day connection for residential solar power, he said.

There is a growing demand for electric vehicles, he said. 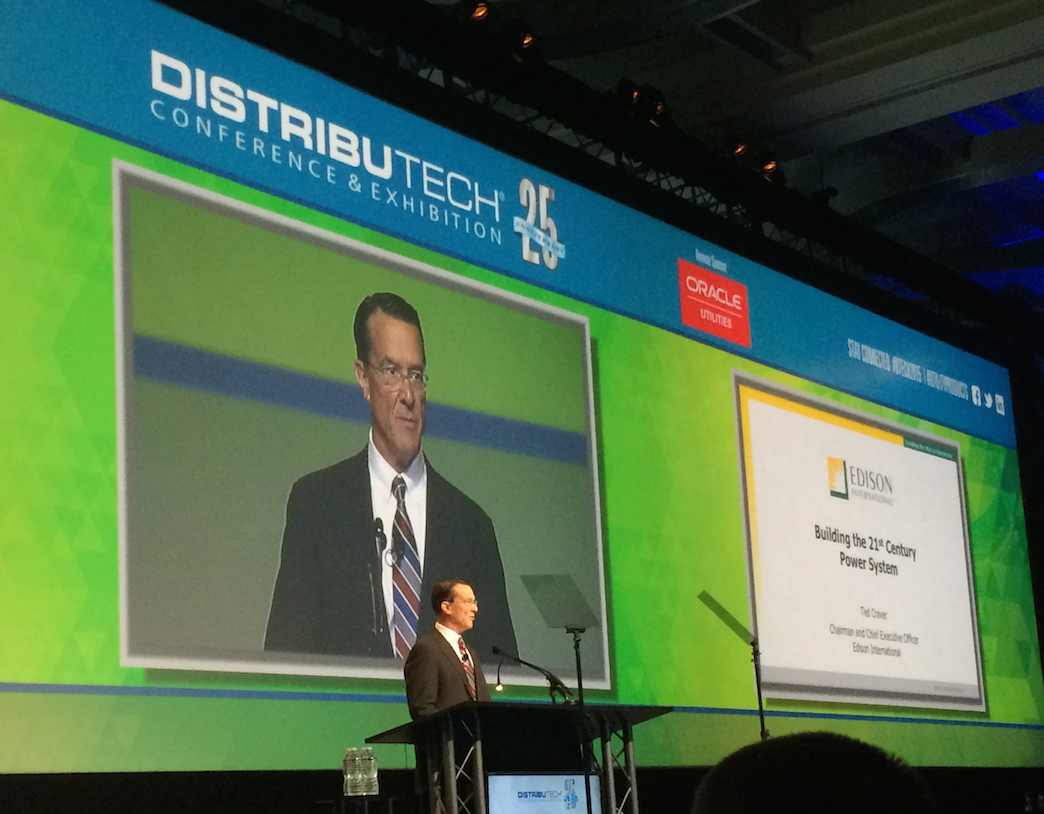 “We are closing in on 15,000 electric vehicles in San Diego,” he said. “New tech is not just making the grid more reliable. It’s allowing consumers to change their relationship with their power utility.”

He said SDG&E has asked the California Public Utilities Commission to bolster charging infrastructure for residences, including multitenant communities.

“The challenge for all of us is to identify the most useful technologies to our customers,” he said. “This may take the form of providing different levels of service to different types of customers with different needs.”

Craver took the stage for his remarks, agreeing with Martin on utilities’ need to embrace technologies that deliver value to customers.

“Why do we need to modernize the grid? Primary reason is our customers want it. They’re telling us more and more that they need it,” Craver said. “We’ve noticed more and more of our customers have a range of power quality that they want. We need to provide customized service to customers, at a price that reflects what they’re buying.”

Utilities have to balance the transition to a low carbon economy while at he same time making sure electricity is still affordable, he said.

“We can’t be myopically focused on the dollars and cents. We will be getting away from simply delivering a commodity and more into delivering value,” he said.

The four key considerations to consider are improving system efficiency, expanding and integrating renewable energy, optimize the use of distributed energy resources, and expand electrification into other sectors.

The power grid that we have right now was built primarily to accommodate peak usage times, he said.

“We want to make our distribution system capable of a two-way flow of electricity. We are investing to the tune of $4.5 billion annually on upgrading our wires system,” he said.

California has led the way on integrating renewables, he said. The costs have come down dramatically and will continue to decline.

“It wasn’t all that long ago there was a big push to go to 10 percent renewables here in California. The governor just mentioned that he wants to go to 50 percent,” he said.

“Many of our customers want control. They want independence. And to be frank, they are tired of the power company’s monopoly over their important resources,” he said.

To increase efficiency while at the same time ensuring future business for utilities, electrification should be expanded into other sectors.

“Industrial, agricultural, transportation. In many cases, we can convert this to electric motors, which is a great way to achieve low carbon goals while at the same time fostering growth in our industry,” he said.

“We think it’s best to plan for change. We don’t want to be deniers of the change. It’s very dangerous to bet against technology,” he said. “If the industry is going to be disrupted, we want to be one of those disruptors. It won’t be for the faint of heart, but it is a fantastic opportunity.”

Kaku, theoretical physicist and bestselling author, spoke about the future of every sector of industry, including medicine, transportation, engineering and entertainment.

“The enormous wealth of our culture comes from science. The rest of the world has been digitized, and the electricity industry is next,” Kaku said. “If you plan for it, you can be a surfer, riding the wave of the future. Ride the wave — that’s what I say.”

In the future, Kaku said, the computer will be everywhere and nowhere. In 2020, according to a concept known as Moore’s Law, computer chips will cost a penny, as much as scrap paper.

“The word ‘computer’ will disappear from the English language,” he said. “In the future, power workers will simply look in their glasses and see the grid all laid out before them. In case of a hurricane, this will reduce the time and cost because the workers will see blueprints laid out right there in their glasses.”

This idea of augmented reality came from the former governor of California in the movie “The Terminator,” he said.

These leaps in technological advancements will occur not only through cheap and plentiful computer chips, but also because of the proliferation of advanced sensors.

For example, Kaku predicted your wallpaper will be intelligent in the future — E-paper coated, intelligent surfaces that will be fully interactable.

“Imagine a wall that can provide you with an electronic doctor, engineer or lawyer. This is how workers will make repairs. If a worker in a substation needs to make a repair, he can consult with engineers on the spot,” he said.

Artificial intelligence, he said, has been sort of a bust. We do not have true robots. But we do have expert systems that have assess to all forms of knowledge.

3-d printers are now are so accurate, he said, that you can print out industrial machines, whatever electrical component you need right there, as long as you have the printer and the blueprint.

“It’s so precise, you can actually recreate heart valves cell by cell with 3-d printing,” he said. “In the future, your computer will be nothing but a faucet. A faucet that taps into the reservoir of information we call the cloud.”

Digitized transportation is another change that could benefit the utility industry.

“GPS tech creates a car that needs no driver,” he said. “From car, to home, to office, there will be a seamless flow of information. Information anywhere, anytime.”

Where all this technology is heading, he said, is a concept called “perfect capitalism.”

“In today’s capitalism, you don’t know what you’re buying or how much you it will truly cost. And the seller in turn doesn’t know anything about you. Perfect capitalism is a victory for the consumer,” he said.

How do you fight back against a consumer who knows everything about your product? You learn everything there is to know about them.

“How does the seller fight back? Big data. Data mining. Targeted marketing, and branding,” he said.

The industry does need to be on guard against distant threats to the power grid. An EMP attack or solar flare could cause massive disruptions to the damage. In 1859, a massive solar event called the Carrington Event disrupted telegraph lines.

“It was a whopper. If it hit today, we can estimate $2 trillion in damage,” he said. “It would fry most of our satellites, short circuit personal electronics, disrupt the power grid.”

The grid can be hardened against such damage, but not without a large amount of funding.

“If such an event did happen again, it would send us back 100 years. We don’t expect this to happen, but who knows when it might?” he said.

Nuclear energy will have to have a place in a carbon-constrained world, he said.

“Fission is a valid form of energy, but Fukushima shook up a lot of people,” he said. “Fusion power could be an ace in the hole.”

In 5 years, the ITER Fusion Reactor will be switched on, he said. The hope is that it will yield 10 times more energy than it consumes, and will use seawater as fuel.